De facto leader of Myanmar, former Nobel Peace recipient, Aung San Suu Kyi, did not attend the UN GA due to increasing criticism involving her government in an ethnic cleansing. 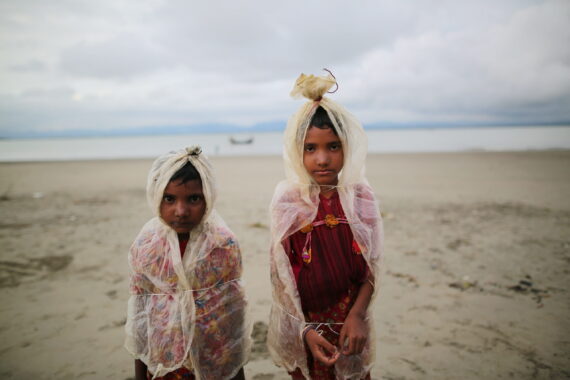 Since violence erupted in Myanmar’s Rakhine State, the UN has stated that an approximate of 421,000 Rohingya Muslims have crossed from Myanmar to Bangladesh since August 25.

“Many of the new arrivals, who walked for days throughout jungle in intense heat and monsoon rains, are already sick and malnourished by the time they reach the teeming settlements of Cox’s Bazar, Bangladesh,” Joel Millman, spokesman for the UN’s International Agency for Migration (IOM) told a news conference at the UN in Geneva on Tuesday.

The refugees are fleeing a fresh security operation in which security forces and Buddhist mobs have killed men, women and children, looed homes and torched Rohingya villages. According to Banglades, around 3,000 Rohingya have been killed in the crackdown.

The Rohingya, described by the UN as the world’s most persecuted people, have faced heightened fears of attack since dozens were killed in communal violence in 2012.

Further, the international organization documented mass gang rapes, killings – including infants and young children – brutal beatings, and disappearances committed by security personnel. In a report, UN investigators said such violations may have constituted crimes against humanity.

In response to the crimes occurring in Myanmar, the Turkish government led humanitarian assistance to Rohingya Muslims. The Turkish Cooperation and Coordination Agency (TIKA), with the assistance of First Lady Emine Erdogan, delivered 1,000 ton of aid to those fleeing violence.

While Turkish President Erdogan has repeatedly called for the end to the violence, he maintained his position during the 72nd session of the UN General Assembly.

In his speech, Erdogan stated that “just like Syria, the international community has not given a good account of itself” in regards to helping Rohingya Muslims.

Erdogan continued claiming that “if this tragedy [in Myanmar] is not stopped, the history of humanity will face another dark stain.”

Further, President Erdogan claimed that the lack of international action confirmed the “relevance of the re-structure of the UN, and the Security Council,” elaborating the fact that “the world is bigger than five.”

De facto leader of Myanmar, former Nobel Peace recipient, Aung San Suu Kyi, did not attend the UN GA due to increasing criticism involving her government in an ethnic cleansing.

As a response to the increasing violence against the Rohingya, UK Prime Minister Theresa May announced that the UK will “stop all defense engagement and training of the Burmese military.”

The UK is suspending all its engagement with Myanmar’s military until the action against the country’s Muslim Rohingya minority is halted, British PM said Tuesday.

“We are very concerned about what is happening to the Rohingya people in Burma [Myanmar]. The military action against them must stop,” May told the UN GA in New York.

Noting that “too many vulnerable people” had to flee for their lives, May said: “Aung San Suu Kyi and the Burmese government need to make it very clear that the military action should stop.”

“The British government is announcing today that we are going to stop all defense engagement and training of the Burmese military by the Ministry of Defense until this issue is resolved,” she added.

Last year, the UK spent around £305,000 (some $412,000) as part of a training program provided to the Myanmar military on democracy, leadership and English language. The program offered by the Ministry of Defense does not include combat training.

Following the absence of Suu Kyi at the UN GA, the government of Myanmar also blocked a resolution at the Association of Southeast Asian Nations (ASEAN).

Authored by Indonesia, the resolution “expressed concern over the humanitarian crisis in the region and urged all parties to respect the rule of law, exercise maximum self-restraint and stop the ongoing violence against the Rohingya in Rakhine state.”

While governor Suu Kyi has spoken out and denied involvement of the military in the crimes against the Rohingya, questions still arise as to the reason why she is reluctant to operate with the international community.