Erickson: US made a terrible mistake by supporting PKK/PYD

Edward J. Erickson, a retired U.S. army officer and currently a professor at the Marine Corps University, talked about the recent developments in Syria's Afrin and the relations between the U.S. and Turkey. 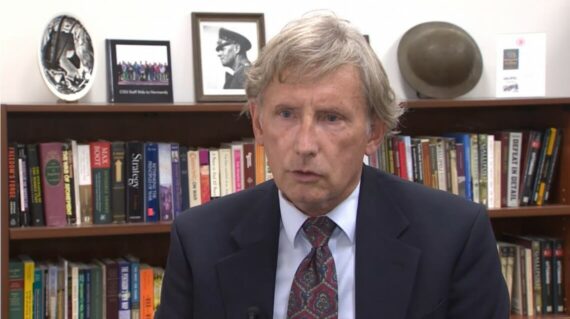 A retired U.S. army officer has said the United States made a “terrible mistake” by supporting Syrian Kurds (PYD/PKK).

In an exclusive interview with Anadolu Agency, Edward J. Erickson, who is currently a professor at the Marine Corps University, talked about the recent developments in Syria’s Afrin and the relations between the U.S. and Turkey.

“The Afrin operation is a continuation of Operation Euphrates Shield,” Erickson said.

“What is happening to Turkey right now is in the same way my country (U.S.) was sucked in to Iraq and Afghanistan, Turkey is being sucked in to Syria,” Erickson said. “It is very difficult to draw the line and say ‘we are going to stop right here’, that is Turkey’s problem.”

United States’ problem is to be a player in Iraq and in Syria, Erickson said. “We tried to support the Free Syrian Army (FSA) and failed, they collapsed. Our next client, the next choice was the YPG, the Kurds.”

“The problem now is in Afrin, as you know there are not just the rebel forces, there are also YPG, Kurdish forces. This has brought Turkey and United States into direct competition.”

When asked about the U.S. arming of PYD/PKK, Erickson said the U.S. needed a group on the ground to fight against Daesh.

“We then sent weapons to Kurds. We promised Turkey – our president, our secretary of state, defense Trump, Tillerson and Mattis – that we will get the weapons back. I don’t think Turkey believes that, personally I don’t believe that. I don’t think Syrian Kurds will return weapons. This is going to lead to big problems between Turkey and the U.S,” he said.

“I think we made a mistake, personally. I don’t speak for the U.S. government. I think the United States made a terrible mistake supporting Syrian Kurds.”

When asked about his opinion on what is United States’ policy in Syria, Erickson said initial Obama policy was that “Assad must go.”

“And when the situation in Syria became so complicated, the Obama administration changed that to ‘maybe Assad can stay but we got to work with it, somehow’,” he said.

“The Trump administration has not revealed (its policy) on what Assad will be,” he added.

Erickson said currently there are 2,000 U.S. soldiers fighting against Daesh in Syria, but their future is unknown after Daesh is crushed.

“ISIS is almost crushed. The question is after ISIS is crushed, what will the Americans do? Will they stay there, will they leave? Will they encourage the PYD to attack Assad? We really don’t know,” he said.

“We are waiting for America’s national military policy,” he added. “Right now, the only government that can function and govern in Syria is the Assad regime. Nobody likes that, but it is the reality.”