Not only Arabs but also Turkmens, Kurds and Assyrians have suffered from the PYD's forced migration policy in Syria. The displaced people, now living in very hard conditions, are dreaming of the day they will return to their homes. 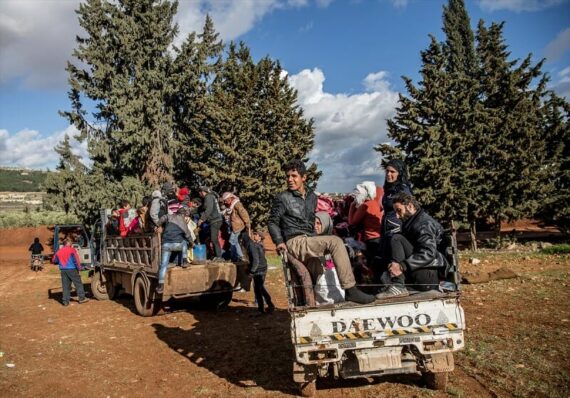 People who are forced and brought to Afrin to be used as human shields by PKK/KCK/PYD-YPG and Daesh terror groups, are seen on a pick-up truck as they return their homes despite all the difficulties in villages of Afrin, Syria on March 16, 2018. AA

In June, 2015, I came across two Syrians in Şanlıurfa’s Akçakale district who were contemplating the Syrian border facing Tell Abyad with hopeless eyes. A black smoke remaining from the U.S. bombardment wreathed the town, which was covered with yellow dust as far as the eye could reach. Having received a substantial amount of military aid from the U.S., the terror group PKK and its Syrian offshoot Democratic Union Party (PYD) were advancing towards Daesh deployments in Tell Abyad thanks to the generous help of the American jets. However; that war, which was almost visible to the naked eye, was not similar to the wars on the other fronts of Syria. Daesh was leaving the areas it occupied without hardly any resistance and heading towards Raqqa, the city the terror group used as its Syrian headquarters at the time. Daesh militants looked as if they were willfully handing over Tell Abyad to the PYD.

The PYD’s attempt to carry out a demographic massacre in north Syria came to light with this war. In Tell Abyad, the PKK blatantly displaced the locals from the land they had been living on for centuries, which eventually started to be vocally expressed and recorded in various international reports. However, nothing was done to stop this crime against humanity. Of course, the PKK and the PYD’s displacement policy did not begin in Tell Abyad. The organization, which started organizing and collecting a base under the name of “Apocular” in eastern and southeastern Turkey during the 1970s, initially kicked off a sweeping process of destruction against religious functionaries along with the members of various Kurdish organizations such as the Revolutionary Democratic Culture Association (DDKD), the Revolutionary Eastern Culture Clubs (DDKO), Kawa and Rizgari. Becoming the only dominant organization in the region through this method, the PKK implemented the exact same method 40 years later in Syria.

The Baath regime, which got into trouble with its armed opponents in Syria in 2011, made an agreement with the PKK leadership in Mount Qandil and assigned the security to the PKK militants in many regions, including Qamishli, Al-Hasakah, Afrin and Ayn al-Arab (Kobani). In return for this generosity of the Assad regime, the PKK took over the role of silencing the opponents of the regime in these areas. On June 27, 2013, the PKK militants launched a fusillade attack on a group of Kurdish civilians who were protesting against the regime in Amuda district. Five civilians, including a 5-year-old girl, were killed in the incident. The terror group’s attacks on dissident Kurds continued. Several leaders including Mashaal Tammo, Abdullah Bedro and Sherzad Rashid were assassinated by the PYD militants. With these methods, the PYD built an empire of fear in north Syria and consolidated its power. No one was able to raise their voice against the organization. The terror group’s next step was displacing the Kurds who were not supporting the PKK. With compulsory military service, detentions, arrests, arbitrary fines and heavy taxes, the Kurds not adhering to the PYD and the PKK were displaced. Tens of thousands of Syrians were forced to leave Afrin, Qamishli, Amuda, Ayn al-Arab and Al-Hasakah.

The legitimacy guise tailored for the PYD

After eliminating the potential problems, the PYD focused on its efforts to form a state in these areas. During the first weeks of 2014, the PKK declared three cantons in north Syria named Afrin, Kobani and Jazira. Nine months later, Daesh took action to capture Kobani. A legitimacy guise was tailored for the PYD during the Daesh-PYD war with the contributions of the international press. Daesh’s attack on Kobani became the top topic on the international agenda whereas foreign correspondents paid visits to Kobani to market the terror group. So, the PYD militants were declared “heroes who defended their people against barbaric Daesh militants.” During this period, many countries offered considerable military support to the PYD. From then on, Washington became the PYD’s boss instead of Damascus. The U.S. authorities firstly helped the establishment of an operational group named Euphrates Volcano by uniting the PYD’s armed wing People’s Protection Units (YPG) with several minor armed groups. Soon after, the group was renamed as the Syrian Democratic Forces (SDF).

After Kobani was “liberated”, many trucks carrying weapons and ammunition were sent to the SDF, in which the YPG operatives formed the backbone whilst the PKK commanded all the decision mechanisms. The aids were coordinated from a U.S. base established in Rimelan district. The YPG militants, who were endeavoring to secure a few checkpoints with ineffective weapons until that point, were being transformed into a regular army.

The next target after Kobani was Tell Abyad, which was occupied by Daesh at the time. Following a low-intensity conflict that lasted a few days, Daesh abandoned Tell Abyad. But the nightmare was not over for the locals. Having lived under the oppression of Daesh for more than two years, the locals of Tell Abyad were forced to leave their villages after the district was captured from Daesh.

On June 23, 2015, a source of mine whose family lives in Tell Abyad sent this text message to me:

“The PKK members gathered families in a school in Hammam Turkmen and threatened them saying ‘This place has become a military zone, so leave the village. If you don’t leave, we will make American jets bomb your houses by giving your coordinates as Daesh targets.’ Some families are now leaving the village out of fear.”

To research this incident, I made a few more contacts and after verifying it published the story in a national newspaper. The neighborhoods of the locals who refused to leave their homes were shelled the next day, upon which they had to be abandoned and most of the victims are currently living in refugee camps. Following this event many people brought this issue to the agenda. As someone bearing witness to this atrocity, I can safely say that the PKK/PYD and the U.S. connived on this crime against humanity in Tell Abyad. In Hammam Turkmen neighborhood, where the closest Daesh positions were 30 kilometers away at the time, 20.000 Syrian Turkmens were displaced in this manner.

The PYD has changed the demographics of Syria

Afterwards, hundreds of thousands of Syrians were forcibly displaced from the towns of Manbij, Deir ez-Zor and Raqqa, which were occupied by the PKK/PYD with the support of U.S. air forces. All of this happened before the eyes of the U.S. The terror group, seeking to consolidate its territorial power in Syria, used many methods to change the demographic structure of the country. Hundreds of Arabs were imprisoned and tortured after being accused of Daesh membership. Those who raised livestock had their cattle seized. Those who owned farmlands had their farms burned. People who did not want to leave had their children forcibly conscripted and sent to the front lines. Most of the people who lived in these areas had to leave to escape such treatment.

The city of Tell Rifaat, belonging to the district of Azaz just south of the Turkish border, is one of the places where PYD/PKK’s strategy of forced displacement has been employed to its greatest extent. PYD/PKK surrounded Tell Rifaat, which lies along the Azaz-Aleppo road, in 2016 and subsequently started shelling civilian settlements in the region. The rebels in Tell Rifaat, seeing no other way out of this situation, had to hand over the region to the PYD to save the lives of the civilians living there. However, despite being spared death, they were not spared exile. The PYD forced 250.000 civilians to leave this region by employing the methods described. Tell Rifaat, once one of the largest settlements in the area, is now a ghost town.

The PKK turned the Daesh attack on Iraq/Sinjar, just like the one on Kobani, into propaganda, and used it to dominate the Yazidi population. The PYD began conscripting Yazidis once the attack was repelled even though during the Daesh attack on Sinjar it did not take a position that would change the course of the battle. The PKK, which had previously created a division called YPJ (Yekineyen Parastina Jin/Women’s Defense Units), created a division consisting solely of Yazidis called YPŞ (Yekineyen Parastina Şengal/Sinjar Resistance Units). Many young Yazidis were transported to Syria over the Rabia border crossing and given mandatory military training by the PKK in the organization’s military camp in Qamishli. Syrian Yazidis were also brought to this camp. After receiving a short military training, some Iraqi Yazidis were sent back to Sinjar while others were sent to Syrian front-lines.

Undoubtedly, the crimes and the demographic massacre of the PKK and the PYD are not limited by these actions. Some local councils founded by Syrian rebels are keeping records of some of the exiled Syrians. But these records are very limited. No credible number exists on how many people have been forcibly displaced from their homes so far. According to current records, the number of Syrians exiled from towns such as Deir ez-Zor, Raqqa, Qamishli, Al-Darbasiyah, Al-Shaddadah, Rmelan, Al-Qahtaniyah, Al-Hasakah, Tell Brak and Tabqa exceeds two million. Not only Arabs but also Turkmens, Kurds and Assyrians have suffered from these policies. The displaced people, now living in very hard conditions, are dreaming of the day they will return to their homes. 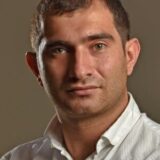 Cihat Arpacık received his B.A. from Istanbul University, Department of History. As a journalist for TRT he worked in conflict zones such as Palestine, Iraq, Libya, Lebanon, Ukraine, Sudan and Chechnya. Since 2011, Arpacık is writing news stories, conducting interviews and making documentaries about the civil war in Syria. Besides, Arpacık is currently a graduate student in Intelligence Studies at National Defense University in Istanbul.