Speaking at a meeting with provincial governors at Cankaya Palace, PM said “We hope that relations between the two allies will return to normal soon.” 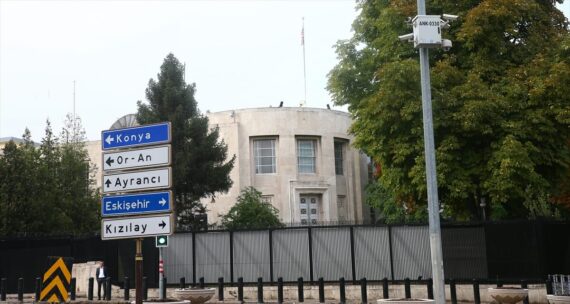 Following the arrest of Metin Topuz, an employee working at the US General Consulate in Istanbul, who was charged with terrorism and suspected links to the Fetullah Terrorist Organization (FETO), the US Embassy in Ankara announced that it had suspended all non-immigrant visa applications from Turkey.

In response to the suspension, Turkey’s Washington Embassy also suspended non-immigrant visa services in the US citing security concerns.

Following the tension between the two countries, Turkish Prime Minister Binali Yildirim expressed the hope that strained ties between Turkey and the US would normalize soon.

Speaking at a meeting with provincial governors at Cankaya Palace, PM said “We hope that relations between the two allies will return to normal soon.”

He assured governors that the administration will use “common sense” in dealing with the situation.

In addition to the PM, in reference to the visa-suspension row, Deputy PM Mehmet Simsek claimed that “This is a temporary undesired dispute and it has no political interference.”

Speaking at the US Chamber of Commerce in Washington during his attendance to the World Bank and IMF annual meetings, Simsek insisted that “We hope that this issue will be resolved.”

Describing the detention of staff at the US missions as a “routine investigation,” deputy PM stated that the security and safety of the US diplomats and employees in Turkey are a “top priority.”

More, speaking on a local news channel Haber Turk, Deputy PM Bekir Bozdag stated that “a decision between the two countries has been made for representatives to come together and work on this issue.”

Bozdag stressed that diplomatic and legal methods should be used in order to resolve the issue rather than “gathering the media to make a statement saying that there is an idea of vengeance here.”

With this comment Bozdag was referring to remarks made last week by outgoing US Ambassador John Bass, who claimed that the arrest of M. Topuz was motivated by “vengeance rather than justice.”

Finally, the Deputy PM added that it is important for the records of Embassy employees to be “clean,” stating that “especially embassies should consider the sensitivities of the country where they are located in terms of the local staff.”

US to “stay aligned” with Turkey

Following announcements made by Turkish officials, Turkish Foreign Minister Mevlut Cavusoglu also spoke on the phone with his US counterpart Rex Tillerson on Wednesday to discuss the mutual visa suspension issue.

While no details have been released regarding the phone call, the talk between the two officials is the first since the US Embassy announced the suspension of visas on Sunday.

More, talking to reporters en route to Central Command in Tampa, Florida, James Mattis stated that Turkey is a NATO ally that “we will work hard to stay aligned with against our common enemy. And we are doing good work together, military to military.”

Touching upon military relations, Mattis confirmed that ongoing military operations have so far been “unaffected” by the row.

When asked if he thought future operations could be affected if tensions continue to run high, he said he did not want to speculate but stated that previous diplomatic spats did not deteriorate military ties.