A chance to deepen Turkey-Germany relations

The Turkish President’s planned visit in September might enable the opportunity for both countries to broaden their horizons, to reduce tension and to deepen bilateral relations. 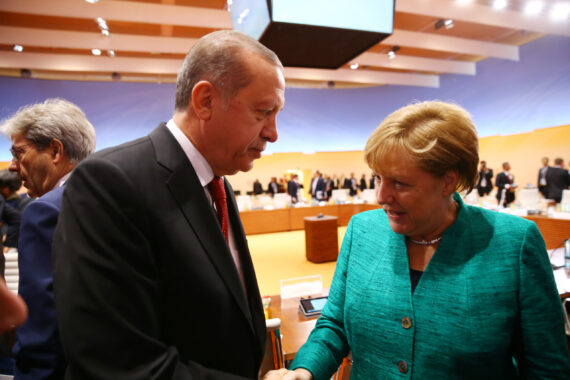 President of Turkey Recep Tayyip Erdogan (L) and German Chancellor Angela Merkel have conversation on the second day of the G20 Leaders' Summit in Hamburg, Germany on July 08, 2017. Anadolu Agency

Last week, it became official that Turkey’s recently re-elected President Recep Tayyip Erdogan will make an official visit to the Federal Republic of Germany on September 28-29. During the visit, Germany’s President Frank-Walter Steinmeier will greet President Erdogan with military honors, and a meeting with Chancellor and CDU leader Angela Merkel has also been planned. This will be Erdogan’s first official visit to Germany as President, since his last visit was in February 2014 when he was Prime Minister.

Regarding the planned visit, though, some German media outlets and biased opposition politicians took – once again – an aggressive stance by focusing on President Erdogan personally. In this sense, it seems very opportunistic that in particular some opposition politicians, who generally sympathize with parties such as the HDP, are making aggressive and non-rational statements.

For instance, former Greens leader Ozdemir once again criticized the planned visit by stating that the Turkish President has to be treated differently in contrast to other “normal” presidents. In addition, politicians from the Left Party, which is officially in favor of uplifting the PKK ban in Germany in its election program, declared their discontent regarding the visit. Furthermore, the far-rightist AfD party, which is actually the main parliamentary opposition in Germany, also opposed the planned visit by bringing the visit in relation with potential and alleged conflicts within the Turkish community in Germany.

On the other hand, parties represented in the current grand coalition government made some rational, reasonable and careful statements by emphasizing the need for dialogue between the two countries.

Besides these political statements concerning particularly domestic concerns, one should also underline some issues which may become of great importance in order to strengthen bilateral relations in the upcoming near future. By this, it shouldn’t be that wrong to address some potential mutual expectations for both sides.

For instance, and more importantly, Turkey is likely to expect the strengthening of bilateral relations while the main emphasis will be set on economic relations. In addition, Turkey’s expectations in the fight against terrorism are also one of its greatest priorities. In the context of Germany, strong support for a long-lasting ally is expected. That is to say; in contrary to Germany’s current ambivalent behavior regarding the PKK terrorist organization and other terrorist organizations –even on German soil–, which are threatening Turkey’s security, an active fight against these terrorist organizations will be welcomed by Turkey.

Germany’s reasonable re-orientation in this field will definitely contribute to a positive future of bilateral relations. Furthermore, a blind non-acceptance of FETO affiliated groups, which are seen as a security threat by Turkey, will be expected. Henceforth, Turkey’s concerns, especially in this field, have to be taken seriously into consideration. Moreover, it wouldn’t be a bad step to treat Turkey as a partner on the same level. Unfortunately, both German politicians and media representatives prefer very striking double standards with regard to Turkey and Turkish personalities close to the government. While on the other hand, politicians from other countries are treated extremely different due to economic reasons. However, one must not disregard the fact that Turkey has a long and successful history with Germany. Turkey is also a NATO member and an EU candidate state of strategic importance.

Marginal and so-called ‘Turkey experts’ who are not – rightly so – taken seriously by anyone in Turkey, should be less welcome and less promoted on German television in comparison to the Turks that actually represent the majority of Turks living in Germany. The latter of these groups are without doubt deliberately and systematically disregarded. This ought to be changed if one honestly expects an improvement of mutual confidence.

On the other hand, Germany will most probably have some expectations as well. Whether these are sincere expectations is a question that goes beyond the borders of this column, but Germany will address the improvement of human rights and the rule of law. However, it’s most likely that the German government will stress the need to continue and develop efficient cooperation regarding the refugee crisis. In addition, it is also in the interest of Germany to develop economic potentials regarding both countries in the near future.

Thus, the Turkish President’s planned visit in September might enable the opportunity for both countries to broaden their horizons, to reduce tension and to deepen bilateral relations. We will see whether this chance will be taken into consideration. In the upcoming weeks, I will also continue to write on this issue in detail.