A National Hero’s Quest for Justice: the Story of Mohamed Aboutrika in Egypt

One of the unlawful practices of the regime is placing individuals on a terror list. Once placed, suspects are issued travel bans and their properties are confiscated. This practice is increasingly instrumental for the Sisi regime and applied particularly to Muslim Brotherhood members. 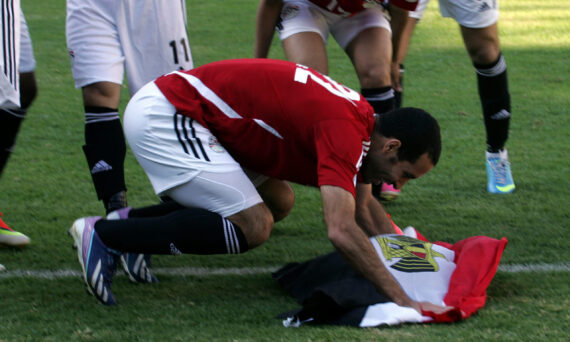 Egypt's striker Aboutrika Salaire holds an Egyptian flag as he celebrates with teammates at the end of a 2014 World Cup qualifying football match against Zimbabwe on June 9, 2013 at the National Sports Stadium in Harare. Getty Images

Egypt has been making headlines recently with its two legendary football players: Liverpool’s award-winning striker Mohammed Salah and former Egyptian international and Al-Ahly player Mohamed Aboutrika. While the former came to fore with his success story, the latter surprises many because of the judicial proceedings against him in his own country.

Even though he does not publicly reveal his political views, it is certain that Mohammed Salah is cautious about antagonizing the Sisi regime. That’s why it can be argued that the main reason for Salah’s political silence is his fear of possible alienation by the regime in Cairo. By not stating his political views, Salah aims to prevent the regime’s pressure against him. Witnessing the experience of Aboutrika, Salah is aware that in order to keep his popularity high in the country, he needs to maintain a compromising relationship with the regime. That’s what he does perfectly. He made a donation to the Tahta Masr Fund, which was created by Sisi in the post-coup process. He also keeps a low politic profile.

Mohamed Aboutrika, on the other hand, is the latest civilian victim of the political pressure of the Sisi regime. While he is considered a national hero in his country, Abou Treika is a more popular figure than the president Abdal Fattah Al-Sisi. However, because of his support for the democratically elected president Mohammad Morsi, Aboutrika is being targeted by the regime.

The process with Aboutrika began in the period following the military coup in 2013. He was accused of being a member of the outlawed Muslim Brotherhood organization and subjected to inquiry. While the investigation continues, his assets were frozen and properties were taken under state control in 2015. He was then moved abroad and started to live in self-exile in Qatar. He continuously refused his alleged ties with the Muslim Brotherhood. Despite this, the judicial processes against him continued. Many believed that the famous player was being punished for his support to the presidency of Muhammad Morsi.

In January of 2017, an Egyptian court decided to place Aboutrika on a terror list, which included a number of leading figures of the Muslim Brotherhood as well. The Egyptians heavily criticized this decision and there were thousands of support messages for Aboutrika, especially on social media.

Another Egyptian national team player and Tottenham Hotspur striker Ahmed Hossam “Mido” showed solidarity with Aboutrika. On his twitter account Mido stated, “I do testify before God that Aboutrika is one of the best personalities I have dealt with in my life and a kind, forgiving man to everybody.” He further called on the Sisi regime to clarify whether they had clear evidence that Aboutrika was linked to terrorism.

Following the decisions on Aboutrika, lawyer and activist Khaled Ali made a statement in support of the national footballer: “When Aboutrika becomes a terrorist, Egyptians defending Egyptian islands become traitors and the presence of cultural and human rights centers becomes a threat to national security. We know that we need to place different definitions on those words.”

In April 2018, the Egyptian prosecutor office suggested that Aboutrika should be excluded from the terror list. Despite this suggestion, in May, Cairo Criminal Court added Aboutrika on the terror list for a second time. After the decision, the Egyptian national player published a statement on social media and asked Egyptian authorities to end this unlawful process against him. He also stated that he could not wait to return to his country.

Despite the negative attitude of the regime, Aboutrika continues to be accepted as one of the country’s greatest heroes. In a poll by FIFA at the beginning of 2018, Aboutrika was named as the best Egyptian player ever. He was chosen Africa Best Player of the Year award four times and played a big role in 2013 when Cairo’s Al-Ahly won the African Champions League cup.

Sisi regime and the future of oppression

Human rights abuses have remained the biggest problem in Egypt in the period since the military coup in 2013. Thousands of civilians are subjected to judicial proceedings on the basis of their membership to the Muslim Brotherhood, a civil network that has peacefully existed in the country since 1928. A large number of these civilians were taken to military courts, while they remain in jail for long periods during the court proceedings.

One of the unlawful practices of the regime is placing individuals on a terror list. Once placed, suspects are issued travel bans and their properties are confiscated. This practice is increasingly instrumental for the Sisi regime and applied particularly to Muslim Brotherhood members.

This attitude of the Sisi regime can be understood from a much wider perspective. The Muslim Brotherhood was a civil organization that has been operating in the country for years as a civil society movement and has never resorted to any kind of violence during the Hosni Mubarak period or following the 2011 revolution. However, the post-2011 revolution period considered this organization as a direct threat to the existing structure of politics in the Middle East. Therefore, a number of counter-revolutionary initiatives were established. The most prominent of these initiatives was the one in Egypt. Considering the Muslim Brotherhood organization as a possible power base in the region, these counter-revolutionary forces aimed to remove such groups from the political arena. Aboutrika’s story shows that this policy is so rigid that even national heroes, such as himself, can be victim to such political pressure.