A New Challenge for Turkey - US Relations: Gülen's Extradition

It is meaningless to condemn the coup attempt without taking action against the leading putschist. A decisive step by the US government to change the negative perception held by the Turkish public would be the extradition of Gülen to Turkey. 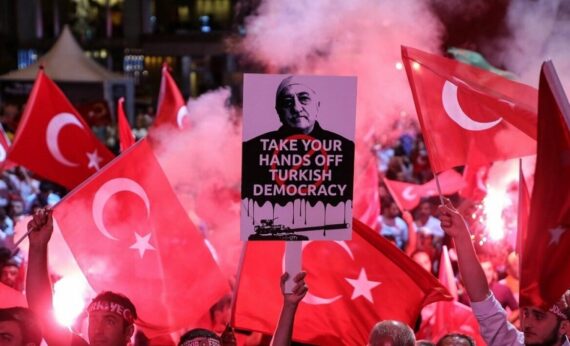 On July 15, 2016, an organized junta embedded in the Turkish Armed Forces (TSK) attempted to stage a coup against the Turkish government using terrorist methods. According to the last news, 246 people were killed and more than 2,000 injured. President Recep Tayyip Erdoğan stated that this junta was controlled by the Gülenist Terrorist Organization (FETO). The General Staff of the TSK released a statement, published on the TSK’s official website, describing the coup attempt as being perpetrated by treacherous terrorist members of the illegal organization (FETO). Similar expressions were also used in testimonies given to the public prosecutors by high-ranking military commanders detained as part of the coup investigation.

NewsBy Büşra Toprak
According to news reports, the aide of Chief of Staff Hulusi Akar confessed his affiliation to FETO and also admitted to wiretapping Hulusi Akar under the directive of FETO’s high-ranking members. Moreover, in his statement to the prosecutor, Akar said that coup plotters had offered him a phone from which to call Gülen. In addition to this, the leader of the ruling Justice and Development Party (AK Party), Prime Minister Binali Yıldırım, and the leader of the Nationalist Movement Party (MHP), Devlet Bahçeli, have all openly stated similar views regarding the coup attempt. Their statements show that there is a consensus of opinion that FETO is the main actor of the coup attempt.Although US president Barack Obama identified Turkey-US relations in 2008 as representative of a “model partnership”, the tension between the two countries is significant, at present, mostly due to the Syrian crises but particularly because of the US discourse on and policies towards the PYD, the PKK’s Syria branch. Now the extradition of Fetullah Gülen has become a serious challenge for Turkey-US relations. Gülen holds a Green Card and lives in the US, but Turkey considers Gülen to be the leader of FETO and demands his extradition.

In fact, Turkey has been requesting Gülen’s extradition or deportation since long before the coup attempt. However, the US has not yet answered this request. The question is, why is Gülen’s extradition so crucial for Turkey? FETO acts more like a messianic organization rather than a simple Islamic faction and it purposefully strives to secure strategic state institutions and governmental posts. Its first clear attempt to consolidate its power was signaled in its endeavor to arrest Hakan Fidan, head of the Turkish National Intelligence Organization (MIT).

From that time on, members of FETO have activated themselves to occupy more and more of the judiciary and police bureaucratic systems, becoming a significant source of bureaucratic tutelage. In December 2013, FETO initiated a coup to topple the government by using its power in the judiciary. This attempt represented a turning point and, thereafter, many of the organization’s plots were revealed. FETO began to lose its legitimacy in the eyes of Turkish society and politicians. Since December 2013, President Erdogan has persistently demanded that the Obama administration deport Gülen. The issue has become more fundamental than ever.

The public in Turkey strongly believe that there has to be a foreign country behind such a sophisticated coup attempt. Some recent field studies illustrate that people believe that it is the US government supporting the coup attempt. Gülen lives in the US, and with the approval or protection of the government. Political authorities in the US have expressed their displeasure of this perception by the Turkish public, but their expression changes nothing in that regard as long as the US government continues to protect Gülen.

For the Turkish authorities and the public, neutralizing the leading cadre of a terrorist group is fundamental to fight against FETO. The failed coup attempt will certainly accelerate the government’s efforts to fight against the members of this terrorist organization, who have established their ascendency in bureaucracy and in the security units. What motivates them is the messianic personality and aura of the leadership and, because of that, the extradition of Gülen is vital to dissolve the organization. In his speech on July 16, Erdoğan repeated the extradition request. Bekir Bozdağ, the Minister of Justice, stated that Turkey has fulfilled all of the requirements for the extradition. It is expected that senior executives from the ministries of Justice and Internal Affairs will conduct a visit to the US to discuss Gülen’s extradition.

John Kerry stated that the US is ready to cooperate with the Turkish government but reaffirmed the legal aspect of the extradition issue underlining the necessity of Turkey’s responsibility to present tangible evidence demonstrating Gülen’s involvement in the coup attempt. Additionally, the US ambassador to Turkey repeated that the US authorities are ready to cooperate over the extradition of anyone who is legally resident in the United States as long as the requirements of the bilateral agreement on the extradition are met. There is a mutual agreement for the extradition of criminals between Turkey and the US valid since 1980, so there is already a legal ground for Gülen’s extradition. However, there is a political aspect too and the initiatives of the US decision makers will play a very important role in this regard. It would be meaningless for the US to both condemn the coup attempt and offer cooperation but without taking action against the leading putschist. If the US government hopes to change the negative perception held by the Turkish public and state authorities, a decisive step to this end would be the extradition of Gülen to Turkey.