After meeting with President Xi Jinping for over 1 hour at the Great Hall of the People, the two leaders gave the message that the two countries have great potential for enhancing cooperation. 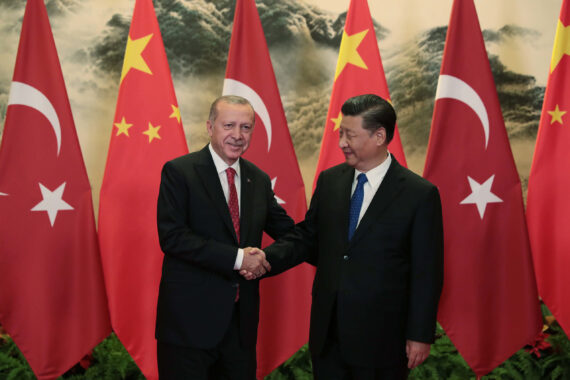 President of Turkey, Recep Tayyip Erdogan (L) and Chinese President Xi Jinping (R) shake hands as they pose for a photo before an inter-delegation meeting held after an official welcoming ceremony in Beijing, China on July 02, 2019. Anadolu Agency

Both Turkey and China have had difficult relations with the U.S. in the past year. The U.S. decision to not increase tariffs on Chinese products has re-opened room for dialogue in bilateral relations. Likewise, topics that are of concern for relations between Turkey and the U.S., such as FETO, the fight against PKK terrorism, the purchase of S-400s, still remain unsolved.

During the G20 Leaders’ Summit in Osaka, Japan, President Trump stated, “The U.S. had a complicated situation in how to react to Turkey’s S-400 deal with Russia.” The president also blamed Barack Obama for setting conditions on the patriot missiles that were to be purchased by Turkey, claiming that his administration were to blame for the current state of relations between the two countries.

Both China and Turkey, apart from having separate problems with the United States, have been affected by the U.S. sanctions on Iran. Due to this, Turkey and China are trying to deepen their economic cooperation in order to at least compensate for what they lose when they cannot trade with Iran.

During President Erdogan’s official state visit to China on 15 June, 2019, the two presidents made it clear that they support the existence of a new world order that is more advanced, fairly constructed and willing to absorb and fully represent all states. With his interview with Chinese Xinhua News Agency, President Erdogan said that the two states were in favor of a “new international order, which will serve the interests of humanity.” He further added that due to Turkey and China having the world’s most ancient civilizations, they both have a duty to “contribute to building this new system.”

President Erdogan praised the Chinese Belt and Road Initiative by describing it as the “greatest development projects of the 21st century, encompassing over 100 nations and international organizations.”

The president stressed that Turkey was one of the first countries to back this initiative in early 2013. He also mentioned that the Turkish “Middle Corridor” Project is lying at the heart of the Chinese initiative.

During the visit, the two leaders agreed to double Turkey’s trade volume with China to 100 billion dollars. In addition, the Turkish president called for Chinese businessmen to invest more in Turkey and declared that the AK Party government have a target of welcoming 1 million Chinese tourists to Turkey per year as a step forward for serving the interests of both countries and to strengthen bilateral ties.

Underlining the role of China in international politics, President Erdogan said that for the sake of world peace, security and stability, in addition to enhancing multilateralism – the values that both countries share – it is fundamental to “achieve cooperation with our Chinese friends.”

After meeting with President Xi Jinping for over 1 hour at the Great Hall of the People, the two leaders gave the message that the two countries have great potential for enhancing cooperation.

President Xi Jinping said that the two states should work together for the sake of propping a multilateral new world system with the UN as its essence. The Chinese president also added that the new world system should be constructed based on international law.