A New Roadmap in Education: What Does the “2023 Vision Document” Promise?

What makes the Ministry of National Education's '2023 Education Vision' document important is that it has turned goals towards the solution of subjects that have been discussed and studied over many years into a concrete text and strategic plan. 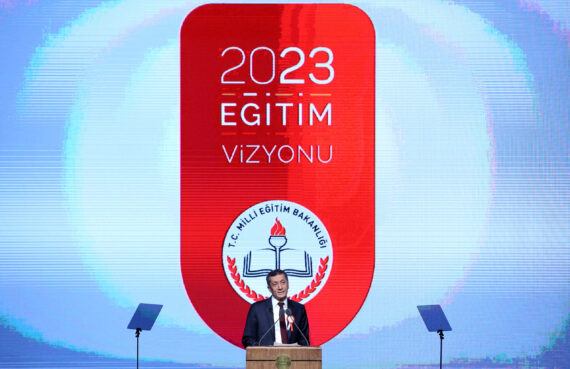 After the vision document titled “Education in 2023” was shared by Minister of National Education, Ziya Selcuk, education has once again become a central topic on the Turkish political and public agenda. The document sets many goals for the year 2023 regarding education in all its levels and forms and offers a vision in subjects such as fundamental policies, administration of education, assessment and evaluation, improvement of public resources, guidance and counseling services, foreign language teaching.

While in his speech Ziya Selcuk tried to subdue expectations by saying “Do not expect me to pull a rabbit out of a hat,” the vision document received remarkable attention. Even though the field of education in Turkey has undergone many important changes and shifts, it has not yet reached a desirable point with regards to its qualitative aspects. The position of the minister of national education changing constantly has led to instability in the education system. The output of our education system still fails to produce results that are internationally competitive. These reasons have resulted in people treating the vision document as a much-awaited prescription to address these chronic problems.

As someone who has worked in the field of education for many years and who follows developments in the field closely, I can say that the matters contained in the vision document are not entirely new and they have long been voiced on many platforms. But what makes the vision document important is that it has turned the goals toward the solution of these subjects that have seen many discussions and studies over the years into a concrete text and strategical plan. Moreover, this document is important in bringing stability to the educational system and providing a roadmap regardless of individual actors.

Turkey’s 2023 Education Vision document is important as it has transformed debates on education in Turkey over many years into a concrete text and strategic plan.

Heavy emphasis on the human aspect and morals

The philosophical background that serves as the basis for the 2023 education vision is the subject of the first section of the vision document. The document emphasizes how education is not a mechanical system but a human one and the human aspect needs to be the central focal point of it. The main mission of the 2023 education vision is stated as preparing children for the world of tomorrow in a way that is ours but still is different from us, with a perspective that encompasses both meaning and matter. Moreover, the document emphasizes the necessity of imparting a moral character that seeks the benefit of humanity as a whole to the individuals who grow up within the envisioned educational system. To accomplish this, as Ziya Selcuk has expressed that all parts of the education system, including schools, curricula, administrators, teachers, and students, need to be parts of a process of transition in a synchronized way. In this manner, the process will evolve into a campaign to transform education.

The “betterment” of the education system not with huge and sudden reforms but with small and effective touches is the most prominent theme of the vision document. While everyone is favorable to the talk of reforming the education system, it is obvious that the education system is currently suffering from an overload of reforms. Thus, the most suitable way to reach the desired goals is to avoid tiring the system with huge reforms and seek improvements through targeted small changes. Obviously if these small changes are implemented in a healthy approach, gradually the sum of their effects will constitute a reform.

In the 2023 education vision document, the discourse on creating policies based on data is heavily emphasized. Basing every implemented policy on data will ensure that the policies proceed on a healthy ground and heavily contribute to achieving the intended goals. The fact that the preparation for the policies targeted in the vision document will consist of three steps, first small and medium level pilot studies and then nation-wide implementation, will allow careful examination and evaluation of each policy.

The 2023 Vision Document emphasizes how education is not a mechanical system but a human one, and that this aspect must be the central focal point of education.

The vision document states that each school will be analyzed and through the analysis a data-driven development model will be created for every school. The schools in Turkey can greatly differ from each other in terms of geography and sociology, physical infrastructure, technological equipment, teacher, student and parent profiles, and these differences can have large effects on the quality of the education given in schools. Thus, evaluating the needs of each school individually, as if taking an x-ray and then creating a suitable development model specific to it, will reduce the differences in opportunities between schools. These gaps of differences between schools are the main reason of the demand for centralized exams in Turkey. Addressing these gaps of opportunity between schools will subsequently decrease the demand for these exams and reduce the pressure on students. Another important goal set in the vision document is the reduction of schools that admit students via exams. When too many schools admit students this way, they are associated with the “points” a student is required to score to be admitted, creating a hierarchy between schools. Due to this reason, the reduction of schools that admit students via exams as well as improvement of local schools are two critical goals included in the vision document. Also, the goal to review the academic and social development of children from early childhood to high school graduation through creating a unique e-portfolio for each student is another positive approach included in the document.

However, the document does not express what kind of mechanism will be created by the ministry to address students lacking behind in their academic and social developments.

Teachers are undoubtedly the most important aspect in determining the quality of educational systems. The “Improvement and administration of public resources” title of the vision document contains goals regarding the training and career developments of teachers and administrators. But in this context, we can say that teachers merit their own title in the vision document due to their critical role within the educational system.

The most striking goal in the document regarding teachers is that the adoption of a new “Occupational Law For Teachers” is planned. Along with this, some other goals included in the document are the creation of career steps for teachers and administrators that allow vertical and horizontal changes in position, incentivizing occupational expertise programs on the graduate level, creation of implementation-heavy models in the training and education of new teachers, creation of new incentive mechanisms for successful teachers such as sending them abroad, and reduction in the work period of contract teachers. Another matter that is often discussed in the public but is not well understood due to its ambiguity is the removal of the pedagogical formation process. The vision document does not state that the formation process will be removed but that graduate level occupational expertise programs for teachers will be opened. But for this program it is stated that priority will be given to teachers who are currently employed by the Ministry of National Education. However, the formation process previously meant a process that was targeted at people who did not graduate from a faculty of education seeking to become teachers. In this situation it is as of now unclear how this process will be conducted for those who have not graduated from a faculty of education. Announcements by the ministry state that the formation process will be conducted based on a new model designated by the ministry. Thus, the details of this subject needs to be elaborated on as soon as possible.

The vision document that sets goals for the educational system deals with matters that are too extensive and detailed to be resolved within three years. It should not be forgotten that each goal requires meticulous and long processes such as budget planning, infrastructure building, training and education of required public resources, administrative evaluation and data-based analysis of the stages of preparation and pilot studies. For example, one of the goals that received the most attention is the decision to include the age of 5 in the period of mandatory education. Within three years the quality of preschool education can be improved or it can be made more common. But making it mandatory will require extensive legal work, infrastructure planning, new teachers and a significant amount of funds. Similarly, goals such as the reduction of lecture hours and types, creation of design workshops in schools should also be planned to be implemented over a much longer time period. Thus, it will be for the best to evaluate and plan these goals in a more realistic basis.

The 2023 Education Vision document has placed teachers at the forefront of reform in the education system and has promised the adoption of a new “Occupational Law for Teachers.”

From goals to results

The 2023 education vision document can be considered a step in the positive direction for the improvement of the education system due to the subjects it includes and the goals it sets. However, to turn these goals into concrete policies requires well thought-out action plans, qualified people who will implement these plans and significant institutional capacity. In this process universities, educational researchers and non-governmental organization will have important responsibilities. Supporting the ministry through conducting studies and the ministry undertaking this process with an attitude that encourages participation is critical in achieving the goals set. Along with this, in this period where changes in the education system are being planned, it’s better to aim for steady improvements rather than attempt miracles.

Müberra Nur Emin graduated with a dual major in Sociology and History from Hacettepe University in 2012. While currently a Research Assistant at SETA’s Society and Culture branch, she is currently pursuing her MA in Sociology at Yildirim Beyazit University.