A Pending Threat for the West: Foreign Fighters in the YPG

Battle-hardened veterans who have fought within the ranks of the YPG may wait for a crisis or for a war to promote their ideology, recruit and train new members against their real enemy – “the capitalists.” 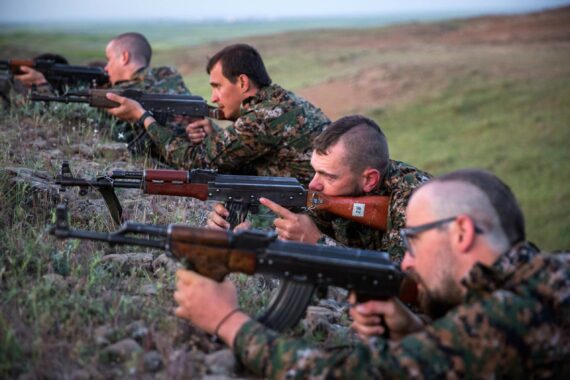 Foreign fighters who joined the Kurdish People’s Protection Units (YPG) take part in a training session on April 29, 2015 in the south-west Syrian region of Ras al-Ain, close to the Turkish border. AFP

Many foreigners have joined the ranks of the PKK/YPG in order to fight against DAESH. While some in the West advocate these people, the reality is that they have joined a terrorist organization to fight against another terrorist organization. Especially in regards to the terroristic methods of suicide attacks employed by the PKK and the radical leftist ideology of the PKK/YPG, these foreign fighters could pose a major threat towards the West. Although the majority of foreigners in 2014 joined the YPG to primarily fight against DAESH, after 2015 the trend changed in favor of radical leftists who joined the group for its radical leftist ideology. Today, the United States is supporting the YPG, like they supported the Afghan Mujahedeen in the past. Later on, however, foreign veterans of the Afghanistan war, such as Osama bin Laden, formed Al-Qaeda and conducted terrorist attacks against the so-called “real enemy” – the United States of America. Afghanistan as a successful model and training ground improved radical terrorism all over the world. The same may happen in the case of radical leftists and the successful PKK/YPG model in Syria as some may consider that for radical leftists, the US is the “real enemy” too.

On an international level, the PYD/YPG has conducted a very demanding campaign on media presence and brand control, ranging from political offices across Europe to Russia and Saudi Arabia, mobilizing both traditional and social media to push the issue forward. The PYD has highlighted two key issues in its Western reach: the group’s antagonism to DAESH – indeed, its opposition to all Islamists and even to non-political religious conservatives – and its outward promotion of universalist liberal ideas such as women’s rights, democracy, pluralism, diversity, economic justice and even environmental sustainability.

Due to its sophisticated media outreach, many foreigners joined the YPG. While the vast majority of foreigners within the YPG are Turkish, Iraqi or Iranian citizens of Kurdish origin, Kurds living in the West have also joined the militia. Although solid figures in regards to the number of non-Kurdish foreign fighters is not available, admitting that it is hard to give a solid number, Kyle Orton from the Henry Jackson Society told the author that he estimates the number of foreigners from the West to be as high as 1,200. He also stated that the number of foreigners joining the YPG rapidly increased after 2016. Among the notable demographic facts is that there is a strong trend towards younger recruits. Over 60% of YPG foreign volunteers are under 30 and 80% under 40 years of age.

Following the wall being built on the Turkey-Syria border, foreigners have pursued two different routes when joining the YPG. The first is landing in Sulaymaniyah in northern Iraq, transferring to the Qandil Mountains and from there entering into Syria, or smuggling themselves into areas near Fishhabur and Sinjar in the eastern region of the Kurdistan Regional Government (KRG) – sometimes under the guise of a journalistic company – and entering Syria from there.

While the international coalition led by the U.S. has heavily supported the YPG in its supposed fight against DAESH, the terrorist group is currently investing in state-building according to the radical leftist thesis of Abdullah Ocalan called “Democratic Confederalism.” With the aim to create this state, the Syrian branch of the PKK, the YPG, is propagating its radical leftist ideology which advocates suicide attacks. Just like how the case of Afghanistan was for radical Islamists, the example of so-called “Rojava” is an important example that illustrates how radical leftists achieve their goals with military and terroristic methods. Thus, when eventually trained radical leftists within the YPG return to their home countries, they can propagate their ideology and their experience(s). It is only a matter of time for the radical left to remember who their “real enemy” is – namely, the capitalist system. Therefore, one cannot rule out terrorist attacks from this group in the West for the future.

Suicide attacks may be the most dangerous and radical form of terrorist attacks. From giant terror attacks like 9/11 or lone wolf attacks in France, suicide was a premise for terrorists. More, the psychological effect upon relatives of victims and society as a whole is more intense if the terror comes in the form of a suicide attack. Foreign fighters within the YPG are ideologized within a structure that actively endorses the idea of suicide attacks and promotes suicide bombers as heroes. While groups such as DAESH propagate suicide attacks with pseudo religious arguments, the PKK approaches them in a way which has the potential to reach more people in the West. The reason for this is because the general structure of society in the West makes it more vulnerable to non-religious extremism – as Muslims in the West only form a minority of society in comparison to other secular groups, while Daesh may have to convert an individual firstly from their origins in order to advertise its belief, radical leftists can directly work on ideological indoctrination. Hence, the PKK as a terrorist organization that has successfully gathered international support, may become a role-model for many Western radical leftists, especially when foreign fighters in the ranks of the YPG return home.

YPG as the Syrian branch of the PKK is commanded by senior PKK veterans who have fought against Turkey and who have ordered multiple terrorist attacks.[1] The PKK’s history of suicide bombings began in June 1996, and it was Ocalan’s decision to release suicide bombers, especially women. Of the 15 suicide bombers between 1996 and 1999, 11 were young women. Only 1 volunteered, and the others were chosen by Ocalan himself. The age of the perpetrators range between 17 and 27 years. None of them had professional skills and some of them were early school leavers who usually came from overcrowded and poor families. Young female PKK members were recruited at the age of 10, where they were trained as guerrilla fighters and separated from their parents. This shows the “importance” of women’s rights and gender equality for the PKK – a characteristic many commentators falsely boast about.

The use of suicide attacks by the PKK still continues. For instance, TAK, as an offshoot of the PKK, carried out a deadly terrorist attack in the Turkish capital Ankara on March 13, 2016, which killed 37 people. Turkey named one of the suicide bombers as Seher Cagla Demir who had been trained by the YPG in Syria. More, on 9 October, the PKK carried out a suicide attack on a checkpoint in eastern Turkey killing 10 soldiers and 8 civilians, wounding 10 soldiers and 16 civilians.

The suicide attack tactic utilized by the PKK is symbolic of the radical ideology of the terrorist group, in which foreign fighters have joined. Some analysts and experts have tried to explain the use of suicide-attacks by DAESH by referencing to the belief of the hereafter, stating that the promise of 72 virgins in paradise was enough for DAESH members to carry out such attacks. This is the difference between DAESH and the PKK/YPG, as while the former rests its belief in a religious conviction, an ideological belief is enough for motivating the latter. Thus, the PKK/YPG as a Marxist-Leninist group is an important example illustrating the results of a radical political ideology.

Although their general strategy and abilities were limited, as seen during the G-20 summit in Hamburg, radical leftists are violent. They burned cars, demolished shops and fought against police forces. Within the security forces in Germany, it is well known that radical leftists train recruits how to fight against police forces, how to build molotov cocktails and demolish shops. They even trained and prepared before the G-20 summit at a German university. While radical leftists pose such danger for Europe at the time being, one can only think of results when these trainings are given by former foreign fighters within the ranks of the YPG. As a veteran trained with weapons, knowledge in combat fighting, militia structures, bomb-building and suicide attacks, their abilities will improve the threat opposed by radical leftists in the West and therefore the radical left in the West may increase their quality in violence.

Syria to become the Afghanistan of radical leftists?

As stated earlier, the Afghanistan experience and training camps of Al-Qaeda in Afghanistan massively increased the abilities and strategies of radical Islamists in terms of violence. Afghanistan was a successful model for them all over the globe. Thanks to crisis and wars, they found an environment to promote their ideology, to recruit and train new members. Veterans who fought the Russians trained new recruits against their real enemy – “the West.”

Just like the Afghanistan experience, Syria has a grave potential to become a hub for radical leftists – even today, radical leftists have organized themselves in YPG-controlled areas and have established camps to train their members. Battle-hardened veterans who have fought within the ranks of the YPG may wait for a crisis or for a war to promote their ideology, recruit and train new members against their real enemy – “the capitalists.”

Also Read
What is Turkey’s Military Agenda in Northern Syria?