Germany, Sweden, Japan and the European Union offered their strong support to Bangladesh over the Rohingya issue. 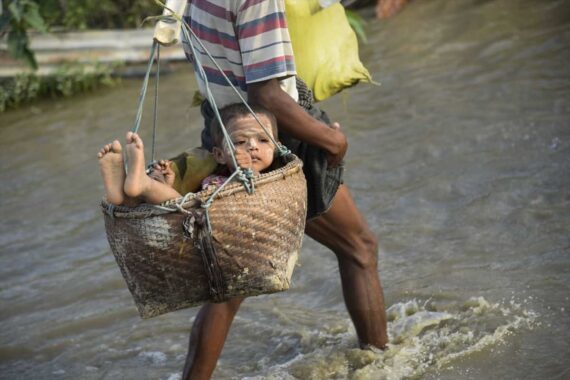 A kid is seen in a basket as Rohingya refugees walk to take shelter in the southern part of Bangladesh at Palongkhali in Cox’s Bazar, Bangladesh on November 02, 2017. Anadolu Agency

As Rohingyas face purge and mass massacres in their home country Myanmar at the hands of Buddhist mobs and the state military, in neighboring Bangladesh a US delegation is reported to have called the atrocities against Rohingyas as “war crimes.”

Jeff Merkley, leader of the delegation, told Prime Minister Sheik Hasina that the events in Myanmar are “like war crimes,” a day after the US lawmakers visited Rohingya camps in Cox’s Bazar.

He appreciated Bangladesh’s response to the challenge of Rohingyas who are fleeing Myanmar in droves to find shelter in Bangladesh. The US delegation claimed that they were ready to provide any assistance to resolve the crisis.

Bangladesh, even though with poor resources and a high poverty rate, is becoming the main host country to bear the burden of Rohingya refugees.

US Senator Richard Durbin, Congresswomen Betty McCollum and Jan Schakowsky, and Congressman David N. Cicilline were part of the delegation.

An estimated 620,000 Rohingya have crossed from Myanmar’s western state of Rakhine into Bangladesh over the past three months, according to the UN.

The refugees are fleeing a military operation in which security forces and Buddhist mobs have killed men, women and children, looted homes and torched Rohingya villages. Around 3,000 Rohingya are reported to have been killed in the crackdown.