A Safe Zone in Northern Syria is a Must for Turkey

If the U.S. and Turkey can work together on establishing a safe zone in northern Syria with the goal of achieving stability and security, it would go a long way in repairing years of mutual distrust. 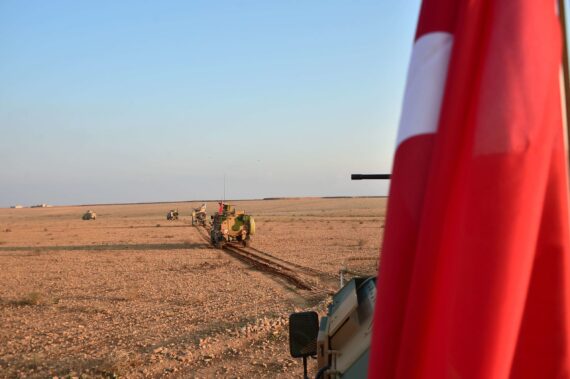 Armoured vehicles of Turkish and U.S. troops conduct their second round of joint patrols in the northern Syrian city of Manbij, as part of a deal to rid the area of the YPG/PKK terrorist groups, on November 8, 2018 in Manbij, Syria. Anadolu Agency

Turkey has long called for the establishment of some sort of a safe zone in Syria over the course of the conflict. Such calls were primarily aimed at preventing regime violence against civilians and the opposition. Turkish calls on the international community to act on the principle of responsibility to protect were ignored and Russia’s direct military intervention ended any prospect of such a scenario. As the conflict evolved, the U.S.-led coalition narrowly defined its mission in terms of counterterrorism against Daesh only. Furthermore, the U.S. investment in the YPG, the Syrian branch of the PKK, precluded any cooperation between the U.S. and Turkey, which could have worked to establish such a zone. Today, as the U.S. withdraws, Turkey sees a safe zone as the only option to protect its national security along the Syrian border.

The course of the conflict, in other words, has shifted from a rebellion by the opposition against the Assad regime to a de facto failed state in which international powers conducted operations against terror organizations. At the same time, Syria became a battleground for regional powers with their various proxies on the ground. In an environment where there have been very little and piecemeal instances of international cooperation, a lasting solution remained elusive at best. The U.S. decision to work “by, with, and through” the YPG has simply complicated this picture by creating a major crisis between two NATO allies. Furthermore, the U.S. has refused to provide leadership to resolve the conflict through years of indecision. President Trump’s decision to withdraw, even if many argue about its manner and timing, ironically provides a clear direction of the U.S. policy in Syria. The U.S. is leaving the country, that much we know.

As the U.S. withdraws, Turkey sees a safe zone as the only option to protect its national security along the Syrian border.

As the U.S. military is gearing to depart Syria within a matter of months, the central question for the U.S. planners seems to be how to ensure that the YPG is not attacked by Turkey. Turkish policymakers are quite puzzled by this priority as the real question should be about how to ensure the national security of a NATO ally is protected. Turkey is determined to prevent the YPG from achieving an autonomous zone for its operations. A sure way for Turkey to accomplish this goal is to create a safe zone under Turkish military’s control supported by opposition forces. Turkey hopes to repatriate significant numbers of refugees to settle in this new zone. Such a zone would not only satisfy Turkey’s national security concerns but also create conditions for the repatriation of refugees. The establishment of a safe zone under Turkish control would contribute to stabilization efforts that have long relied on sub-state actors such as the YPG. True stabilization can only happen through the commitment of serious state actors like Turkey.

Creating a safe zone would not only satisfy Turkey’s national security concerns but also create conditions for the repatriation of refugees.

If a safe zone under Turkey’s control materializes with the support and coordination of the U.S., Turkey-U.S. relations can benefit from a serious confidence building measure after years of mistrust. It would alleviate the Turkish concerns about a continued commitment to the protection of and support for the YPG even after the U.S. withdrawal. For the U.S military, protecting their “local allies” in the fight against Daesh seems to be a priority but the administration needs to recognize that such a policy has a destabilizing effect on the dynamics on the ground, not to mention asking a NATO ally to look the other way when its national security is threatened. The U.S. withdrawal without leaving a power vacuum and a renewed instability on the ground can only happen with Turkey. If the U.S. and Turkey can work together on establishing a safe zone in northern Syria with the goal of achieving stability and security, it would go a long way in repairing years of mutual distrust.