During a period in which Qatar is subject to regional isolation, where Turkey is busy in ruling out immediate threats as part of its foreign policy, and where the political bloc inclined to the Muslim Brotherhood is in eclipse across the Middle East, the most reasonable strategy Hamas could adopt in order to remain as an element of the equation was to agree on the unity government. 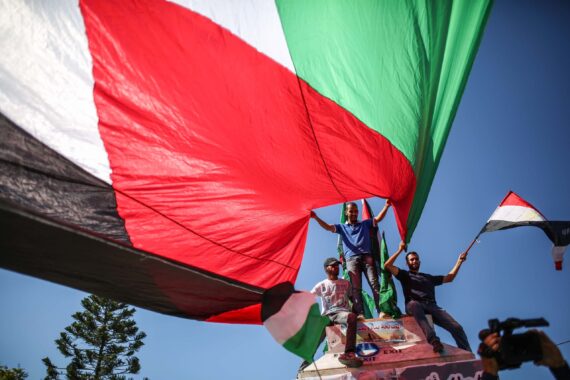 A group of people gather in front of the Unknown Soldiers monument in Gaza City to celebrate the agreement reached between Hamas and Fatah, October 12, 2017. Anadolu Agency

Palestinian politics witnessed a significant turning point during October 2017. Having been in conflict since 2006, the two main Palestinian political parties, Hamas and Fatah, agreed to form a government as a result of negotiations mediated by Egypt.

In the coming phase, the Hamas government, which is in control of Gaza, agreed to transfer the administration of the region to the consensus government to be established with Fatah. It can be argued that the reason behind Hamas taking a step in this direction is the worsening humanitarian situation in Gaza, the increased pressure of the Israeli and Egyptian governments on the movement and the regional repression politics towards the Muslim Brotherhood.  While in light of these reasons many analysts have interpreted Hamas’s decision regarding a reconciliation government as a “step backwards,” when evaluated carefully, it can be argued that this decision can be read as a strategic move of the Palestinian group.

Since the deterioration of relations in 2006, two previous attempts were made in order to restore relations between Hamas and Fatah and to establish a government in Palestine. However, these initiatives failed. The reason for this failure was partially due to the fact that the requirements laid out by Hamas were not fulfilled. Hamas was able to leave the negotiation table in 2011 and later in 2014 due to the political atmosphere that was prevalent during those times. While already maintaining the support of regional powers such as Turkey and Qatar, Hamas also received the support of the Muslim Brotherhood, which came to power in Egypt in 2012. Thus, Hamas determined its political orientation according to the conditions of the time.

However, developments in regional politics in the following period took place against Hamas. The Egyptian military coup staged on July 3, 2013, political sanctions imposed on Qatar in 2014 and the attempted coup in Turkey on July 15, 2016 not only caused a loss of power within these countries, but also led to a reconfiguration of priorities, which is why support for the Palestinian group declined. More, in parallel with Israeli policies, the aggravation of sanctions imposed on Hamas-led Gaza by the Sisi regime in Egypt, Turkey’s focus on military operations, especially in Syria, and sanctions launched on Qatar in June all indicated that Hamas was in need of a new strategy.

No step back on vital issues

Within this strategic framework, Hamas gave its approval for the unity government projected to be established in Palestine and made some decisions in this respect. These decisions include ending the administrative body governing Gaza, the transfer of control of border gates to the unity government and the establishment of a police force to be formed in the Gaza strip by the new administration. Despite these decisions, an important aspect of this new strategy employed by Hamas is that it has not stepped back on some issues that the movement considers “vital.”

One of the most vital issues include refusing to abolish the Izz ad-Din al-Qassam Brigades – the military wing of Hamas. The Izz ad-Din al-Qassam Brigades, the most powerful armed force in Palestine, is estimated to have at least 20.000 fighters. It is known that the Brigades caused significant losses in the Israeli army during Israel’s attacks on Gaza in 2014. While the killing of 64 Israeli soldiers during a 50-day clash came across as a shock for Tel-Aviv, it was also a reflection of the military capability of the Brigades. As a matter of fact, the increasing loss of military personnel was reported as a reason for Israel to terminate its operations.

The ‘red lines’ of Hamas

Another issue that Hamas identified as a “red line” in negotiations was the future of the status of thousands of people recruited as state officials in Gaza. While these officials were asked to leave their posts, Hamas displayed a demanding attitude in this regard and ensured that the officials continued with their duties on condition of some adjustments in their salaries. Thus, many members of Hamas who were assigned to administrative bodies by the organization, will continue to serve and receive their salaries by the unity government.

Another key aspect of Hamas’ new strategy is its approach towards Israel. Being a movement of resistance, which was found on the principle of refusing to recognizing the state of Israel, Hamas has not given up on its conventional position and declared that it will maintain its resistance. Hamas officials reacted to Israeli Prime Minister Netayahu’s prerequisite for the recognition of the reconciliation government that “Hamas must lay down arms and recognize Israel,” which the organization interpreted as an intervention of Palestinian internal affairs. Meanwhile, following the decision on reconciliation, the Gaza-based Popular Committee against the Siege of Gaza announced that their fight to increase international pressure on Israel will continue.

With the reconciliation government, Palestinian politics will have a structure consisting of two equal parties.  Hamas’s approval of the unity government as a strategic move is of vital importance as this will enable the organization to display a more legitimate struggle within the political realm. At this point, the attitudes of regional allies such as Turkey and Qatar are important for Hamas.

As a matter of fact, the Turkish government developed close ties with Hamas, exerted serious efforts for the removal of the blockade on the region and even froze its relations with Israel for a period. During this period, former Hamas leader Khaled Meshaal’s participation at the AK Party Congress in 2012 could be interpreted as a demonstration of Ankara’s positive attitude towards the movement. Likewise, Qatar has also developed close ties with Hamas within the recent period.

These relations reached a record high when Mohammad Morsi, one of the leading figures of the Muslim Brotherhood, was elected as the President of Egypt. Then ruling Emir of Qatar, Hamad bin Khalifa Al Thani paid a visit to Gaza in October 2012 and kicked off a multi-million dollar investment in the region. Consequently, it can be contended that both Turkey and Qatar will want to maintain their close interest in Palestinian politics through Hamas. In this respect therefore, it is of utmost importance that the organization is represented as an equal and legitimate actor in Palestinian politics.

Did Hamas lean towards Egypt and the UAE bloc?

Lastly, it can be argued that comments alleging that Hamas has diverged from Turkey and Qatar and has leaned towards Egypt and the United Arab Emirates (UAE) do not entirely reflect the approach of the organization’s decision makers. In this context, Hamas leader Ismail Haniyeh’s former advisor Ahmed Yusuf said: “We have no intention of siding with one Arab country against another because our goal is to garner all the Arab support possible for the Palestinian cause. So any alliance with Egypt and the UAE at the expense of Qatar or Turkey will lead the Palestinian cause to lose great momentum, and our relations with Egypt do not infer a rift with Qatar and Turkey.” This statement indicates that the strategy upheld by the organization displays a more rational demeanor.

As a result, Hamas’ new strategy concerning the unity government in Palestine will lead to the recognition of the organization as a major actor in regional politics. In recognition of the destruction created by the political conditions that led to the process of the coup d’etat in Egypt, Hamas displayed a refreshed rational stance and adopted a new political strategy by pursuing the path of the Ennahda Movement in Tunisia.

During a period in which Qatar is subject to regional isolation, where Turkey is busy in ruling out immediate threats as part of its foreign policy, and where the political bloc inclined to the Muslim Brotherhood is in eclipse across the Middle East, the most reasonable strategy Hamas could adopt in order to remain as an element of the equation was to agree on the unity government. Consequently, it must not be forgotten that the decision taken by the movement aims to prevent a plot in which Hamas could have been completely excluded from the political arena due to pressure exerted by Egypt, Israel’s aggressive policies and the political irregularities within Saudi Arabia and the UAE.