A Textbook Example: How the Gulenist Cult Became a Terrorist Organization

If terror is the use of violence by non-state actors targeting civilians in order to achieve their political objectives, Gulenists did this on the night of July 15 and, hence, they are a textbook example of terrorist organizations - a very innovative one. 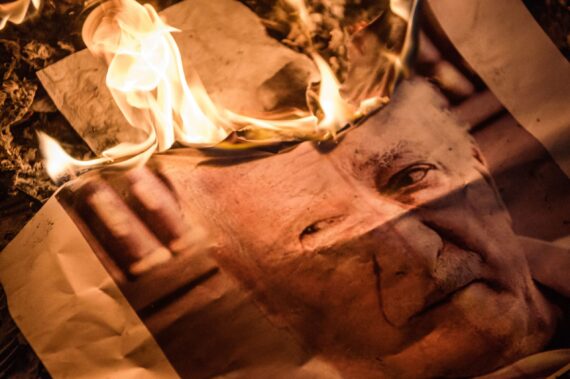 A picture taken on July 18, 2016 shows a poster picturing Fethullah Gulen burning during a rally at Taksim square in Istanbul on July 18, 2016 following the military failed coup attempt of July 15. Getty Images

In his address to the United Nations on Tuesday, September 25, President Erdogan called on world leaders to take measures against the Gulenist criminal cult network. Two days later, this time during his trip to Germany, the Turkish President repeated his call and asked Germany to designate the Gulenist organization as a terrorist organization. Despite Turkey’s call for over two years now, the Gulenist cult members are still active in Western countries, from the United States to Germany and many others.

The organization operates in the disguise of charter schools in the U.S., think-tanks all over the Western world, and some online media networks such as news portals, and so on. While the Turkish public opinion is united against FETO, not everybody is well informed on the organization, and this is why they have difficulty in understanding Turkey’s insistence on this matter.

The very first question towards Turkish demands on the Gulenist network is on the terrorism charges. Many academics and journalists with some interest on this matter in the West question the terrorism charges. These questions are now being repeated after Erdogan’s recent remarks in the U.S. and Germany. They simply ask how an organization led by a “cleric” and which runs charter schools can engage in terrorism. Despite the amount of evidence delivered by the Turkish authorities, this evidence does not reach the ears that need to hear them.

Here is a brief story of the Gulenist network’s gradual and complex journey into terrorism:

It was quite uncommon to call the Gulenist organization – also known as FETO – a terrorist organization a few years ago. After all, terrorism is a form of political violence, and the group was not violent – until they became violent. With its school system to recruit and train young minds, the organization’s structure worked quite effectively in Turkey and abroad.

Gradually, the picture became clear as the recruits began to infiltrate state institutions – first in small numbers, then in masses. It became increasingly clear to the Turkish decision makers that the organization was stealing classified information, sometimes distorting it, and servicing it to foreign services or the media depending on the purpose.

By the end of 2013, there was no doubt about the fact that the members of the Gulenist criminal cult in various state institutions were well connected to each other and were well guided by a central authority in a clear command chain. This is essentially why they were called the “parallel state” by Erdogan – who was the organization’s primary target.

While it took the AK Party government some time to clarify the real purpose and structure of the Gulenists, once they did, there was no way back other than stopping them. As the government began to clean the Gulenists from state institutions, and as it became clear that the elected government will win this battle, Turkey witnessed the July 15 coup attempt in 2016.

The Gulenists in the military carried out a coup attempt, sent a squad to assassinate Erdogan, and killed 248 civilians and state security personnel in multiple spots. And this was the day that the Gulenists were no longer just a secret society infiltrating the state apparatus and being used by foreign services. The July 15 coup attempt also showed that the organization was capable of using violence on a massive scale.

Gulenist academics and journalists also spent quite an effort to spread fake news that night about a manufactured story claiming that Erdogan was fleeing the country and so on. July 15 showed the entire Gulenist criminal network in its entirety on the mission. It was not a conventional coup attempt of soldiers unlike the coups that we know, but it was a joint coup attempt of Gulenist professors, police officers, engineers, and also soldiers. If terror is the use of violence by non-state actors targeting civilians in order to achieve their political objectives, Gulenists did this on the night of July 15 and, hence, they are a textbook example of terrorist organizations – a very innovative one.