A common understanding between Turkey and the U.S. is the establishment of a safe-zone in northeast Syria. However, both sides cannot agree on the depth and the forces controlling the region. 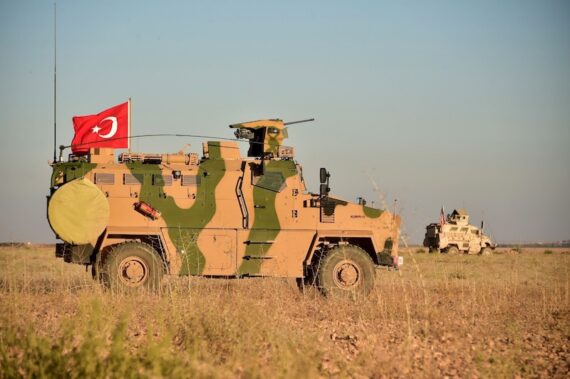 Armoured vehicles of Turkish and U.S. troops conduct their second round of joint patrols in the northern Syrian city of Manbij, as part of a deal to rid the area of the YPG/PKK terrorist groups, on November 8, 2018 in Manbij, Syria. AA

In response to Turkey’s assembling of troops along the Syria-Tukey border to areas held by the YPG terror group, the U.S. warned Turkey against launching any cross-border military operation in Syria. As I wrote, U.S. sanctions over the purchase of the Russian S-400 systems by Turkey might trigger a Turkish military operation in northeast Syria, but it will remain the duty of the U.S. to resolve the situation and avoid a confrontation with Turkey in Syria.

As negotiations over the safe-zone have stalled and a Turkish military operation seems imminent, the U.S. has to accept Turkey establishing a safe-zone by military means and has to withdraw south from the area and left the YPG face the same fate they did in Afrin. The defeat of the YPG by Turkey would allow the U.S. to form a new Syrian Democratic Forces with only non-YPG elements and join forces with Turkey.

As negotiations over the safe-zone have stalled and a Turkish military operation seems imminent, the U.S. has to accept Turkey establishing a safe-zone by military means.

Firstly, the U.S. expressed its concerns that U.S. troops deployed in Syria might be caught up in a potential cross-border Turkish military operation. In reality, Turkey does not need to care about U.S. concerns, as the U.S. has repeatedly ignored Turkey’s national security concerns by supplying the Syrian branch of the PKK. When the U.S., as a NATO partner, ignored an essential threat to the territorial integrity of Turkey and supplied terrorists, then why should Turkey stop itself from pursuing its national interest due to U.S. concerns over the situation of around 2,600 U.S. troops in Syria?

Secondly, the U.S. suggested that dialogue is the only way to secure the Turkey-Syria border in a sustainable manner. If so, why hasn’t the Manbij roadmap been implemented? Or, why have negotiations over a potential safe-zone stalled? While Turkey maintains dialogue, the U.S. and YPG are creating facts on the ground, such as the formation of 15 different military councils.

If the U.S. would have applied the withdrawal decision by Trump instead of annulling it, Turkey and the U.S. would have built a strong partnership in Syria. However, in case of a Turkish unilateral military operation, both sides can avoid confrontation. Turkey and the U.S. can agree to form the safe-zone by military means. Judging on the events of the past, neither the American administration nor its special envoy James Jeffrey are capable of enforcing its vision on CENTCOM officials operating in Syria, nor is the YPG willing to withdraw and allow a safe-zone torpedoing the long-term vision of the PKK.

A common understanding between Turkey and the U.S. is the establishment of a safe-zone in northeast Syria. However, both sides cannot agree on the depth and the forces controlling the region. Turkey wants full depth and full control, the U.S. wants limited depth and no Turkish control. Even if both sides would have agreed on anything, the question of how the U.S. would enforce the agreement terms on the YPG still remains unanswered.

If the U.S. is as much concerned as they claim about the situation of U.S. troops in Syria, then the U.S. should make sure that its soldiers will withdraw south before the start of a potential Turkish military operation in Syria. The U.S. should let Turkey, the Syrian opposition and the YPG fight it out, and concentrate on the non-YPG elements of the SDF, focusing on reconstruction and governance. When the fighting in the north is over, the U.S. can engage with the new realities on the ground and work with Turkey.