Abdul Basit Saroot: The Syrian Revolution’s Voice From the Grave

Abdul Basit Saroot was the voice of a nation ripped apart by a crimson dictator hell bent on keeping power at any cost. 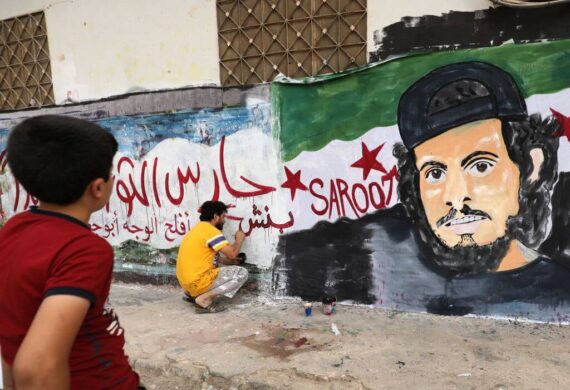 A child watches as a local artist works on a mural painting showing the late Syrian rebel fighter Abdel-Basset al-Sarout in the town of Binnish in the jihadist-held northern Idlib province on June 8, 2019. OMAR HAJ KADOUR/AFP/Getty Images

The people are unsafe in their homes.

Young and old they all know whoever kills their own people is a traitor.

Freedom is what the people demand.

From Homs, to Daraa, to Banias.”

These are the words of a song written and sung by Abdul Basit Saroot, who was the voice of a nation ripped apart by a crimson dictator hell bent on keeping power at any cost.

Before the war he was a young and promising goal keeper for the junior Syrian national football club.

When protesters hit the streets he decided to join them and take a stand against the violence, arrests, torture, and treachery of the regime towards civilians.

Of course, his time as a member of the junior national football club didn’t give him preferential status.

Instead it made him and his family a direct target for regime attacks. Eventually, he and four of his siblings, as well as his father were are killed in regime attacks.

During protests anti-Assad revolutionaries could pick out his voice from a crowd of tens of thousands.

With a hoarse tone and a mellow melody about it, his voice became the calling cry of Syrian revolutionaries around the world.

He spent many months besieged in Homs and reluctantly left in a deal struck between the opposition and the regime in 2014.

Activists like Abdul Basit Saroot have become icons for the Syrian opposition and are endeared by many Syrians searching for an alternative to the dictatorial rule of the Assad regime.

Following his death in a hospital in southern Turkey on June 8, his funeral procession was attended by tens of thousands of Syrians displaced by years of war.

Even though there are always deaths, natural and otherwise, the Syrian community in southern Turkey responded voraciously to the news of Abdul Basit Saroot’s death.

Activists like Abdul Basit Saroot have become icons for the Syrian opposition and are endeared by many Syrians searching for an alternative to the dictatorial rule of the Assad regime.

Thousands of displaced Syrians gathered at a mosque in Reyhanlı, Turkey and held funeral prayers for him and then delivered his body to Idlib where another procession of mourners took him to a graveyard and buried Saroot next to his brother. Syrians who couldn’t reach there held their own prayers for Saroot around the world as well.

The mobilization of all these people revived a sense of purpose to the Syrian revolution and triggered serious discussions about reviving the revolutionary spirit among Syrians.

Losing an icon like Abdul Basit Saroot is a tragedy for the family, friends, and even the revolution. However, his death brought people together and rekindled a revolutionary spirit that had faded in the hearts of many Syrians suffering from the fatigue of non-stop war and death for eight years.

Why is all of this significant?

This reality reveals a state of the Syrian conflict that is contrary to that which claims the Syrian revolution is over and Assad has won the war.

Syrians that have been displaced, more than 10 million, about half of Syria’s prewar population, are still committed to the revolutionary change that they set out for in 2011.

Saroot’s songs are famous for invoking freedom and bringing down the Assad regime. His songs also reminded people of their homes and serenaded the idea of once again returning to them – without Assad.

Upon his death those lyrics were sung in unison via social media and in demonstrations inside Syria and around the world commemorating the revolutionary spirit that Saroot stirred among the masses. Uniting a large cohort of the Syrian people who many suspected were no longer united.

Another revelation is that Syrians, especially those that have fled the war, do have an opinion. They haven’t grown callous from many years of war as some might suggest.

The reality reveals a state of the Syrian conflict that is contrary to that which claims the Syrian revolution is over and Assad has won the war.

Currently the regime, backed by Russia and Iran, and with incentivized reconstruction programs from the international community via the UN, is trying to change the focus of the conflict from violent military action to reconstruction and a political process.

Part of that effort, according to the UN resolution 2254, requires that an election would take place after an 18 month transition period.

According to the agreement even those Syrians that are displaced, living in non-regime controlled areas of Syria, as well as abroad, should be able to take part in such a vote.

As we can see from their reaction to the news of Saroot’s death, it’s clear that those Syrians are willing to let their voices be heard.

Whether Syrians will get the chance to go to the ballot box and choose who will lead them next is yet to be determined.

But what Saroot’s death tells us for sure is that there is real opposition to Assad’s rule that may disagree on many issues, but are united by a voice that called for overthrowing Assad and eventually gave his life for the cause.

As the Russian backed regime bombing campaign stacks up a higher death toll and the destruction of critical infrastructure cripples civilian life, the millions of people affected by the violence are not going to easily forget what and who caused their loss and suffering.

Signs of such sentiment can be found in other parts of Syria as well, where with Russia’s help, the regime managed to take over.

For example in Daraa, on the Syrian-Jordanian border, Syrians that entered into so-called reconciliation agreements continue to show opposition to Assad rule through demonstrations, protests, and armed resistance.

This came after regime and Iranian forces entered the area and began arresting, abducting, and abusing the locals. They were even forcefully conscripting former armed opposition fighters and forcing them to fight on the front lines in northern Hama, southern Idlib and rural Latakia.

But those fighters that actually reached the front lines were unwilling to fight, or ran away, and on the whole were ineffective in the fighting since May.

The regimes and its allies have employed these failed policies since the regime took full control of the region in southern Syria.

However unlikely it seems now, if the regime did manage to take all 4,800 square kilometers of the remaining northwestern pocket, Syrians there and in the region will surely voice their objection to living under the rule of a dictatorial regime backed by international allies who have no regard for international law and don’t represent the interests of the Syrian people.