Abiy Ahmed’s foreign policy reforms and the peace breeze sweeping the Horn of Africa is commendable and long-waited but the deafening geopolitical changes’ raison d’etre definitely lie elsewhere: the U.S. Secretary of State. 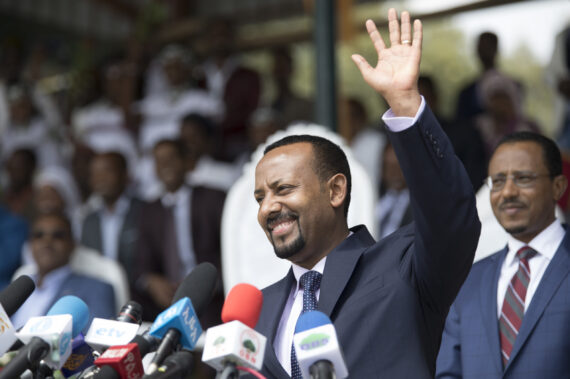 Ethiopia's new Prime Minister Abiy Ahmed waves to supporters as he delivers a speech during his rally in Ambo, about 120km west of Addis Ababa, Ethiopia, on April 11, 2018. Getty Images

East Africa has witnessed an unprecedented geopolitical shake-up since Abiy Ahmed ascended to power as Ethiopia’s first ethnically Oromo premier earlier this year. His foreign policies were so swift and drastic that it caught his doubters and supporters alike off-guard. However, the region observers and political analysts struggled to decipher the substantiality of his foreign policies vis-à-vis the current ethnic-based internal decadence Ethiopia is going through.

Since Abiy Ahmed came to power, Ethiopia and Eritrea have normalized relations – the two countries were technically at war since 1998. Eritrea and Djibouti also smoothed ties between themselves after Ethiopia and other gulf states played a critical placatory role. Then for the first time in history, Ethiopia, Eritrea, and Somalia signed a tripartite security agreement of which the details and specifics are unknown to the public even now. Unforeseen seismic changes were altering the region’s geopolitical landscape. Yet all this was occurring as Ethiopia was undergoing neutrotic ethnic violence where more than 2 million people were displaced and rendered homeless.

A keen observer in the region’s geopolitical shifts and vicissitude would not reconcile Abiy’s foreign policy ambitions to Ethiopia’s internal ethnic psychosis. There is a lingering question: Where is Abiy Ahmed’s foreign policy pace and hubris sprouting from while domestic issues glare at him?

The Horn of Africa: the new Sino-American geopolitical playground

A geopolitical policy shift was evident in the U.S. 2018 National Defense Strategy outline: In a speech he made earlier this year, Defense Secretary James Mattis posited that it will be “great power competition, and not terrorism the primary focus of national security.” This change in U.S. foreign and defense policy can be interpreted as the U.S. administration accepting that it needs to engage with other great powers geographically, and leverage its political alliances in Africa to its advantage. This includes engaging with China and Turkey in the context of Africa. Coincidentally, earlier this year, General Thomas Waldhauser, AFRICOM Commander, informed Congress of the geopolitical risk the U.S. faced in the Horn of Africa. Both Turkey and China have military installations in Somalia and Djibouti respectively. This was understood as a threat to U.S. global interests and in particular U.S. interests in the strategic Red Sea and the Gulf of Aden.

The U.S. is wary of the growing Chinese and Turkish soft power influence in Africa. Chinese investments and Turkish humanitarian efforts in the region have surpassed the U.S. in the last decade. African states had on their disposal alternative foreign policy interlocutors and hence new forms of cooperation were possible and forged to their advantages. The U.S. fell out of favor in the age of Donald Trump’s America-first policy. The U.S. had to engage with African nations on a geopolitical level ground; the notions of security and anti-terrorism were hallowed and unsustainable in the face of a multi-polar world system.

It is in this approach that the fast-changing geopolitical landscape of East Africa can be understood and comprehended. Ethiopia has been central to the U.S. fight against terrorism in East Africa – the Ethiopian army invaded Somalia to dismantle the Al-Qaeda affiliated Islamic Courts Union (ICU) in 2006 with the backing of the U.S. Today they are part and parcel of AMISOM efforts to fight Al-Shabaab. Abiy Ahmed, a former member of the Ethiopian army and the founder of its Cyber-security intelligence department was elected by the ruling Ethiopian Peoples’ Democratic Revolutionary Front (EPDRF) to spear-head the country out of the three-year long protests and ethnic violence that engulfed the most populous nation in East Africa. To his credit, the new Prime Minister was cathartic to Ethiopia’s dire conditions, but his foreign policy forays captured global news head-lines.

Containing Turkish and Chinese influences in the Horn of Africa

Shortly after the unprecedented rapprochement with Eritrea, on 24 July this year, Ethiopia’s Abiy Ahmed alongside Isaias Afwerki of Eritrea were in the United Arab Emirates for a tripartite summit. They were received majestically. On 20 September this year, Afwerki was again in the UAE for diplomatic talks. Saudi Arabia and Gulf nations, with the exception of Qatar, were already wary of Turkish and Chinese diplomatic forays into the Horn of Africa: Somalia, a regional ally of Turkey just closed the Emirati embassy in Mogadishu and Djibouti– where China established its first military base– terminated all contracts of the UAE state-owned DP world contracts over operational disputes in the Port of Doraleh. The summit was recognized as a Saudi and UAE (inevitably and ultimately the U.S.) efforts to salvage their geopolitical influence in the face of a growing Turkish and Chinese influence in the region. In their visit, the UAE Crown Prince conferred both leaders with the UAE’s highest award. Shortly after the summit was concluded, Eritrea information minister tweeted that the summit fostered “a broader and robust regional cooperation and coordination.”

Rashid Abdi, the International Crisis Group’s Horn of Africa Director emphasized the role of the U.S. in the tripartite summit and lifting of Eritrea’s sanctions. To counter Turkish and Chinese influence in the horn, a new ally in the name of Eritrea has to be saved first from the doldrums of international sanctions. It is in this consciousness that Abiy Ahmed prioritized normalization of relations with Eritrea. Eritrea was going the way of Iran, Syria, and Cuba and to save-guard U.S. regional interests and security, engaging the tiny nation was inevitable and necessary. Mehari Taddele Maru, a scholar of peace and security observed that the U.S. modus operandi in the Horn of Africa changed drastically: Eritrea has to be “fetched” from diplomatic isolation hence his notion of “Eritrea in, Djibouti out” of the U.S. strategic approach to the Horn of Africa. Somalia – a Turkish sphere of influence – and Djibouti – a Chinese sphere of influence – would be countered and checked with Ethiopia and diplomatically reinvigorated and exorcised Eritrea.

The U.S. is totally in support of the new axis of political alliance that has emerged at the ruins of the Qatari blockade: Saudi Arabia, Egypt, UAE, Bahrain, and Jordan. This comes at the expense of Turkish and Qatari interest in the larger Muslim world and strategic Horn of Africa. A shift is already apparent in U.S. geopolitical strategy: strengthening regional allies geopolitically; propping-up new allies (in this case Eritrea) and other partners in the face of a growing global multi-polar new order. The geopolitical and foreign policy changes in the Horn of Africa ought to be seen in the underlying dynamics of U.S. foreign policy and its perceived threats from other spheres of influences. Abiy Ahmed’s foreign policy reforms and the peace breeze sweeping the Horn of Africa is commendable and long-waited but the deafening geopolitical changes’ raison d’etre definitely lie elsewhere: the U.S. Secretary of State.