As part of their defense strategy, the YPG/PKK had started digging ditches, building tunnels, making barricades, and planting bombs much earlier. It is commented that the ditches and tunnels in Afrin seem professional and this evokes the question if YPG received a foreign support or training to build them. 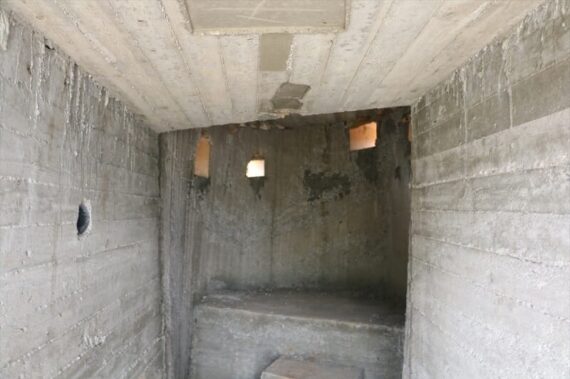 A tunnel is seen after Turkish soldiers and Free Syrian Army (FSA) fighters have cleared Muhammadiyah village and Amarah Hill of PYD/PKK terrorists in western Afrin region, as part of "Operation Olive Branch" in Syria on February 12, 2018.

Some local security sources spoke to Anadolu Agency on condition of anonymity that the YPG/PKK terrorists force civilians to dig two-meter deep, two-meter wide and kilometers-long ditches in order to block the entrance of Turkish military forces into Afrin.

Turkey has been watching the YPG by unmanned aerial vehicles (UAVs), which show how the terrorist organization prevent residents to leave the city. Another video footage captured by Turkish UAVs show how a mine planted by the YPG killed civilians as they tried to leave the city.

As part of their defense strategy, the YPG/PKK had started digging ditches, building tunnels, making barricades, and planting bombs much earlier. It is commented that the ditches and tunnels in Afrin seem professional and this evokes the question if the YPG received a foreign support or training to build them.

Since the first day of the operation, both Turkish military and political authorities have repeatedly pointed out that the operation is targeting only YPG/PKK terrorists in order to establish security and maintain stability along Turkey’s borders as much as to protect civilians from the YPG cruelty, already known to thousands of locals who were forced to leave their houses by force of arms.

Also Read
Who will land on both feet after the Afrin Operation?
We use cookies to optimize your online user experience. To learn about our use of cookies and how you can manage your cookie settings, please see our Privacy Policy. By continuing to use our site you are excepting our use of cookies.Accept Cookies & CloseMore Info