Addressing local officials at the presidential complex, President Erdogan stated that Turkey’s concern in Syria is the “establishment of justice, not land.” 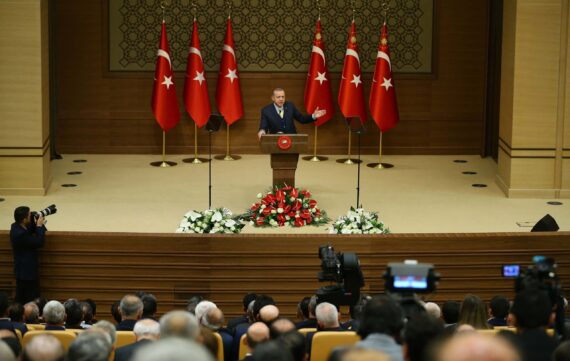 Operation Olive Branch, which began on 20 January, has remained on the political agenda of not only Turkey but the wider Middle East, Russia, the U.S. and NATO.

The operation conducted by the Turkish Armed Forces and the Turkey-backed Free Syrian Army in Afrin aims to clear the region of the estimated 7,000 terrorist militants. The Afrin region has remained a safe hideout for the PKK/YPG after the Assad regime handed it over in 2012.

While several announcements have been made on many fronts within the Turkish administration, Turkish President Recep Tayyip Erdogan underlined on Wednesday that the aim of the operation is to secure justice.

Addressing local officials at the presidential complex, President Erdogan stated that Turkey’s concern is the “establishment of justice, not land.”

The President added that with the success of the Afrin operation, Turkey will not only destroy the terrorists but will also enable 3.5 million refugees in Turkey to return to their homes safely.

During his speech, President Erdogan noted that in total 268 terrorists had been neutralized, while the Turkish army and Free Syrian Army forces had suffered the loss of 8 martyrs over the last four days.

During the first days of the operation, presidential spokesman Ibrahim Kalin warned that the Olive Branch Operation is not designed against the Kurdish population in Afrin.

Since the beginning of the operation, many YPG-affiliated media sources and journalists that sympathize with the terrorist organization have made it out to seem that Turkey is attacking Kurds in the region.

Speaking out against these claims, President Erdogan informed that the PKK/YPG/PYD terrorist group had released all Daesh prisoners under the condition that they would fight against the Turkish army and the FSA in Afrin.

“These terrorist organizations are all the same […] These are terrorist groups serving the same purpose in the same scenario with different roles.”

The President slammed those who mis-portrayed the operation and stated that “it is clear that this operation targets several terrorist organizations,” reminding that similar accusations were made against Turkey during the Operation Euphrates Shield. Turkey had neutralized “more than 3,000 Daesh and hundreds of PYD/YPG terrorists in Operation Euphrates Shield,” and President added that this enabled the conditions for thousands of Syrians to return to their homes.

“I wonder if those who attack Syria don’t notice these?”

Asserting Turkey’s determination to clear the region from all terrorists, the President also stated that the operation would last until the death of the last terrorist.