The situation in Al Hol camp has a huge potential to create the next generation of Daesh, similar to Camp Bucca in Iraq whose inmates including Abu Bakr al Baghdadi formed Daesh out of Al-Qaeda in Iraq. 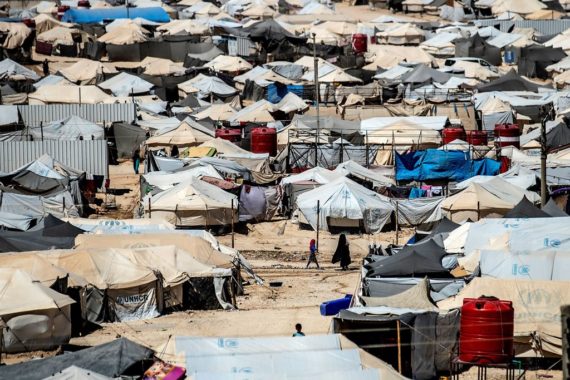 A view of the al-Hol camp in al-Hasakah governorate in northeastern Syria, on August 08, 2019. Getty Images

Many Daesh members are held in makeshift camps, most notably the Al Hol camp in Syria, in which thousands of Daesh women are held together with their children. The camp is mainly divided into two sections, the first hosting foreign Daesh members, the second Syrian and Iraqi Daesh members. Not all of the inhabitants of the camps are Daesh members, especially children. However, the situation in the camp has a huge potential to create the next generation of Daesh, similar to Camp Bucca in Iraq whose inmates including Abu Bakr al Baghdadi formed Daesh out of Al-Qaeda in Iraq.

This time the camp promises a long lasting resurgence of Daesh. Despite Turkey’s warnings, the US opted to go with a YPG-led organization and now the organization is incapable of dealing with the situation. However, small but effective steps can be undertaken to minimize the threat in the short-term, sparing some time to find a lasting solution to the issue of Daesh members.

The Al Hol camp situated in the governorate of Hasakah is inhabited by more than 68,000 people of whom 55% are children under the age of 12. In recent times, female Daesh members asserted their de-facto control over the Al Hol camp implementing Daesh methods within the camp. The female members formed so-called Hisba battalions within the camp and maintained order on their own. The inhabitants organize alleged Sharia-courses and propagate the ideology of Daesh.

The YPG’s lack of control over the camp was demonstrated again recently when a Turkestani Daesh member was heavily beaten up by Russian Daesh members of the camp when she refused to attend the courses. More dramatically, the YPG security discovered the dead body of a woman who was likely killed by the Daesh Hisba group in the camp.

If Daesh captives are left to the YPG who are reportedly incapable, and the issues are not addressed correctly, the Iraqi scenario will likely repeat itself, only more dangerously and brutally than before.

Previously other women and even a little girl were said to be killed by other female Daesh members inside the camp. Other incidents include the burning of tents and the harassment of women and children who do not comply with the rules of the Daesh Hisba in the Al Hol camp. As Turkey warned several times before, the YPG/SDF is overwhelmed with the task of how to deal with Daesh members in custody. Together with Sila Naz Engin, we wrote about the dangers of having terrorists in the hand of other terrorists.

A solution for al-Hol camp

I suggest a two-step approach to the situation. The first should address the urgent situation, ease current risks and win time. The second should be more lasting.

Firstly, the international coalition needs to force the YPG to divide the camps into many smaller ones. No camp should be inhabited by more than one thousand Daesh members. These camps might be bordering each other, but there should be no opportunity to establish contact between the camps for the inhabitants.

Secondly, the international coalition should establish a training center in Turkey to train personnel to manage the affairs in such camps. The training should not be limited to security personnel but also of social employees, teachers and religious scholars. It is important to use the experience of Turkey as a Muslim country and the experience of the Syrian opposition to determine how to deal with Daesh members and people traumatized by Daesh.

The rehabilitation center in Marea or Jarablus might be a good example of a model to follow. The rehabilitation camps have plenty of success stories including children who changed their goals from becoming a suicide bomber to becoming a successful student. Currently, there is no such center in YPG-held areas. After being adequately trained, the employees of these camps should be totally independent from militias on the ground, act under the Syrian Interim Government, be provided security guarantees from the international coalition, and should take total control over the camps and prisons in the area.

However, if Daesh captives are left to the YPG who are reportedly incapable, and the issues are not addressed correctly, the Iraqi scenario will likely repeat itself, only more dangerously and brutally than before.