Merz prefers to officially support Kramp-Karrenbauer while simultaneously continuing to appear as an alternative in any future leadership crisis, something which might occur in the next months. 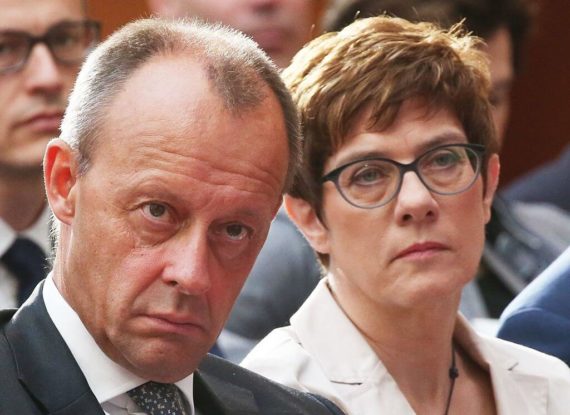 The 32nd federal party convention of the Christian Democratic Union (CDU) will be held in East Germany’s city of Leipzig this upcoming Friday and Saturday (22-23 November). During this convention, a new leader will not be elected but the future projections of the party will be addressed and determined. Given the fact that the Social Democrats (SPD), the junior partner of the current grand coalition government since March 2018, are also heading into the final phase of their leadership search at the end of this month, the CDU’s party convention might be of general relevance and importance too.

In order to clarify the party’s future plans and goals during the convention, CDU party chairperson and the federal minister of defence Annegret Kramp-Karrenbauer called on her opponents to openly state their criticisms thus paving the way for possible controversial debates during the convention. It is a move that Kramp-Karrenbauer most likely hopes will present her as a strong leader who is able to cope with harsh criticism from her party’s ranks.

Kramp-Karrenbauer’s more recent decisions have been the subject of criticism by other party members, such as her surprising call for an internationally controlled safe zone in Northern Syria. Party members have also called for a new negotiation of the current coalition with the Social Democrats. However, in a recently published interview, Kramp-Karrenbauer once again stated that there were no concerns about the existing coalition agreement with the CSU and SPD and thus rejected new negotiations on it.

Kramp-Karrenbauer on the other hand, has constantly tried to portray a rather strong and self-confident image of herself while calling her party’s members to criticize and even discredit the CDU’s policies, and she does this by pointing to the positive achievements of the CDU’s coalition since 2005. However, more recently Kramp-Karrenbauer has become self-critical of her one year performance as chairperson and the party’s decreasing vote shares according to polls.

In addition to several criticisms against Kramp-Karrenbauer, it seems that she still trying to hold a stable position which her intra-party opponents –at least at the moment– do not dare to challenge openly. However, recent polls indicate that for CDU members Kramp-Karrenbauer is not the most popular figure as the next chancellor candidate, but Friedrich Merz. For the moment, however, Merz is not openly challenging Kramp-Karrenbauer, who he lost the leadership race to last December. During that leadership contest, Kramp-Karrenbauer received 517 of the 999 all valid votes while Merz only received 482 votes. Whether a rather different result might occur today is an interesting question which has not been not openly addressed. This is actually related to Merz’ most likely secure strategy.

Merz currently denies any kind of “showdown” at the convention against the CDU chairperson and also strengthened his official stance supporting her. However, even though Merz rejects any kind of a debate on a new chairperson of the CDU, he has said that he will continue his critical statements concerning specific issues.

On this upcoming Friday and Saturday, the CDU is unlikely to challenge its current chairperson. The party’s leading figures will most likely address other topics, among them Turkey’s EU process, which will be also problematized once again, and most likely in a rather unfortunate way due to Turkey’s recent legitimate operation in Northern Syria. But the leadership question of the CDU will most likely continue to be on the party’s table at least until the next parliamentary elections in 2021. Until then, it seems a very clever move by Merz not to risk any chances to challenge the current chairperson Kramp-Karrenbauer who he would most likely lose against, a loss that might result in the end of his political career. Due to this, Merz prefers to officially support Kramp-Karrenbauer while simultaneously continuing to appear as an alternative in any future leadership crisis, something which might occur in the next months.

While Merz is most likely aiming to solidify his own position as a long-lasting alternative, Kramp-Karrenbauer must currently persuade her party members of her future performance. In addition, the SPD’s ongoing leadership search and their final decision in December whether to continue the coalition with the CDU is also an important topic that concerns the entire coalition.