Ambivalent Policies and the Loss of Western Values

Norbert Röttgen, Germany’s Chair of the Foreign Affairs Committee, described the Venezuelan President Maduro as a dictator while German foreign minister Heiko Maas preferred the term “Maduro regime” – all these taking place when Merkel came together with Egypt’s authoritarian leader. 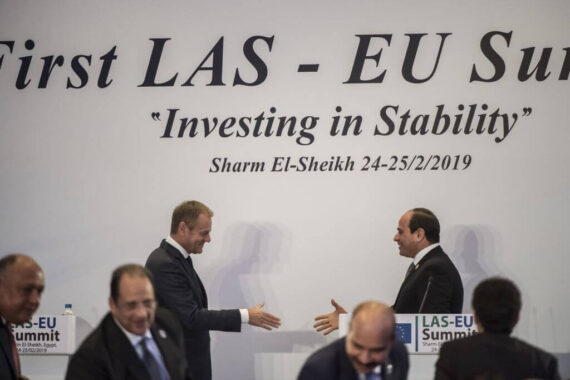 The Egyptian regime has recently executed 9 men convicted of allegedly killing the country’s chief public prosecutor, Hisham Barakat, in 2015. The executed men were among 28 sentenced to death for an alleged involvement in a car bomb attack, which targeted Barakat’s convoy in Cairo. Despite the explanation by the 9 men during their trial that their confessions were taken under torture, nothing changed and the injustice within the Egyptian regime showed its face once again.

But one point to keep in mind, as has been elaborated, these 9 young men would be alive today had it not been for the West’s support for Sisi.

As one can guess, subsequent to the executions by Sisi, neither the U.S. nor the EU took a stance against the regime. Just like the U.S. Secretary of State, EU member states also remained silent on the issue. In addition, just like an ironic joke, the EU came together with the dictatorial Egyptian regime in the context of the “EU-League of Arab States Summit” in Sharm El-Sheikh on 24-25 February. EU politicians such as Donald Tust, who co-chaired the meeting with Sisi, and Jean-Claude Juncker, High Representative Federica Mogherini, and Commissioner Johannes Hahn attended the summit as well.

Germany’s Chancellor also took part in the summit, where she posed for a picture with Egypt’s putschist leader. According to a piece published by the EU, the summit is seen as a chance to strengthen ties between the Arab and European world, and aimed to address “common challenges” such as multilateralism, trade and investment, migration, security, and the overall situation in the region. As one notices, these issues are concerning economic-based interests and expected steps by the regime in order to prevent a refugee influx from, for example, Libya to Europe.

With no surprise, the “value-oriented” EU states did not address topics like dictatorial military regimes within Arab states, the repression of political movements, and the abuse and lack of human rights, the number of political prisoners and the lack of freedom of speech and rule of law in the hosting country.

But with no surprise, the “value-oriented” EU states did not address topics like dictatorial military regimes within Arab states, the repression of political movements, and the abuse and lack of human rights, the number of political prisoners, particularly in Egypt, and the lack of freedom of speech and rule of law in the hosting country. None of these points, which are indispensable for millions of people in the region, have been addressed by representatives of the democratic Western world.

Beside the summit in Egypt, which should be observed as a rather meaningless political attempt to put a sign against countries such as the U.S. and to allegedly fill the vacuum in the subsequent period in the Middle East, and against Russia, Turkey, Iran on the other hand, the question arises as to what those Western representatives of “liberal democracy and the rule of law” have actually done while alone 9 young men in the last week and a total of 15 men were executed in the last one month by the Egyptian regime?

For instance, U.S. President Trump and his administration continued to attack and discredit Venezulean President Maduro, while Trump personally tweeted adoring the North Korean dictatorial dynasty’s leader. In a similar and ambivalent way, EU countries continued to make efforts to recognize Guaido as the interim president of Venezuela, while actually intervening in internal affairs. Germany’s Chair of the Foreign Affairs Committee, Norbert Röttgen (CDU), described the Venezuelan President Maduro as a dictator while German foreign minister Heiko Maas (SPD) preferred the term “Maduro regime” – all these declarations occurred during a time when Merkel came together with Egypt’s authoritarian leader.

Ambivalent, credit-lacking, and hypocrisy-based positions of European leaders show one crucial thing: everything is politically motivated without any respect to the rule of law, universal human rights, or other democratic values.

What kind of hypocrisy level are we talking about? This was not the first time Sisi was welcomed by leading European powers, as he has previously been hosted by Germany and France – of course without any actual criticism of his regime. Thus, all these ambivalent, credit-lacking, and hypocrisy-based positions show one crucial thing. Namely, that all these positions are based on a political motivation, without any respect to the rule of law, universal human rights, or other democratic values.

Thus, even though at the end of the summit in Egypt the European Council President had a pseudo-dispute with Egypt’s President on occasion of a journalist’s human rights-related question, the situation became obvious once again. The West’s alleged values has no meaning in the eyes of Sisi. In fact, he was as confident as to answer with the meaningless words, “Respect our values and ethics, as we do yours.” It is also meaningless to address “his values,” which do not exist. Nevertheless, despite the Western civilized world’s general silence and alleged pragmatist steps in order to build dialogue channels with so-called “strongmen,” it is hopeful to see countries that still stand against such authoritarian and putschist regimes. In this sense, President Erdogan’s clear statements with regard to the totalitarian Sisi regime and the nonsense of the Egyptian judiciary still remains a sense of hope in the eyes of millions.