The idea of forming a strategic alliance in the Middle East (MESA) is not new. It came under many labels and with different names; however, the most common one lately is the “Arab NATO." 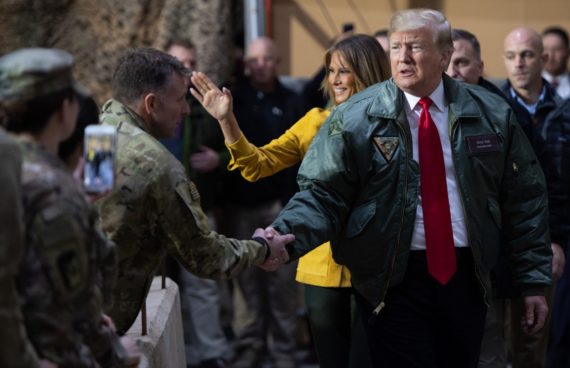 US President Donald Trump and First Lady Melania Trump arrive to speak to members of the US military during an unannounced trip to Al Asad Air Base in Iraq on December 26, 2018. Getty Images

On January 10, U.S. Secretary of State Mike Pompeo delivered a speech in Cairo that meant to be a major policy initiative which reflects America’s new vision for the Middle East. Instead, the speech titled “A Force for Good: America’s Reinvigorated Role in the Middle East,” showed the messy status of the U.S. policies and the chaotic manner during which these policies are pursued.

The speech was confusing, lacked substance, and carried no new ideas beyond the typical messages it meant to deliver: Israel is our top ally, Iran is bad, it is all Obama’s fault, we are committed to continue supporting our dictator friends in the Arab world. The Cairo speech was almost like “mission impossible” because as Pompeo was trying to reassure America’s allies in the Arab region that the U.S. is not going to leave the Middle East, Trump confirmed his decision to withdraw the U.S. troops from Syria.

In his speech, Pompeo uncovered that “Trump administration is working to establish the Middle East Strategic Alliance (MESA) with the aim of confronting the region’s most serious threat, in addition to bolstering energy and economic cooperation”. According to him, MESA will bring members of the Gulf Cooperation Council together, as well as Egypt and Jordan where these countries are required to help the U.S. by joining their forces.

The idea of forming a strategic alliance in the Middle East is not new. It came under many labels and with different names; however, the most common one lately is the “Arab NATO.” In the past, several U.S. administrations sought to accomplish the goal of forming a Middle Eastern alliance without succeeding. In the last year or so, Trump administration pushed forward its plans to forge this alliance which is supposed to bring the above mentioned six countries together. Both the U.S. National Security Advisor John Bolton and the Secretary of State Mike Pompeo played a role in this initiative, yet not major breakthrough is achieved till now.

The idea of forming a strategic alliance in the Middle East is not new. It came under many labels and with different names; however, the most common one lately is the “Arab NATO.”

Trump’s idea is to let MESA serve as a bulwark against Iran, terrorism, extremism, and bring stability to the Middle East. The aim of the U.S. administration is to utilize the collective power of these Middle Eastern nations in a way which allows them to share some of the responsibilities and reduce the financial burdens the U.S. bears. The idea might seem good theoretically; however, from a practical point of view, considering the current regional situation and the kind of relations between these countries from one side and between them and the U.S. from another, it seems more like a delusion.

Second, the supposed members of MESA do not share the same threat perception. In fact, they might be afraid of each other more than any other possible threats such as Iran, radicalism, or terrorism.  Just less than two years ago, at least two members (Saudi Arabia, UAE) of this initiative were reportedly on the verge of invading another member, Qatar. Noting that many members of this expected alliance (UAE, Bahrain, Egypt etc.) are normalizing relations with Assad regime, the oldest standing ally of Iran in the region; they seem more interested in countering Turkey then Iran.

Trump’s idea is to let MESA serve as a bulwark against Iran, terrorism, extremism, and bring stability to the Middle East. The aim of the U.S. administration is to utilize the collective power of these Middle Eastern nations in a way which allows them to share some of the responsibilities and reduce the financial burdens the U.S. bears.

Third, there is not much common between the six Arab members of MESA when it comes to foreign, security and energy policies. Neither they share a common stance towards several fundamental issues in the region such as Iran, Palestine, Yemen, Syria etc., nor they adopt compatible positions. For example, while Saudi Arabia, UAE, Bahrain and Egypt implicitly support Trump’s Middle East peace vision dubbed as “The deal of the century”, Jordan, Qatar and Kuwait refuse it fiercely.

Fourth, military wise, Arabs have never successfully managed to unite their collective military power in a coherent and effective way. When it comes to GCC countries, most of them have the best military equipment/technology money can buy, but their armies have poor performance. Moreover, coordination is even a bigger problem in terms of joint defense initiatives. Riyadh and Abu Dhabi, for example, have not been able to wage a properly coordinated war in Yemen. While Jordan and Egypt have a more professional army, they have financial problems and they might not necessarily agree on the same priorities and security concerns as Saudi Arabia and UAE.

Fifth, these countries have no unified position regarding Iran. Egypt and Jordan might not consider Iran as a threat in the same way Saudi Arabia, UAE and Bahrain do. While Kuwait is trying to keep a safe distance between both powerful regional players (Saudi Arabia and Iran), Oman have a unique relation with Tehran and will never join any military pact against Iran. Even when it comes to countries which consider Iran as a threat, they never do what they are asking others to do. For instance, UAE (with Saudi Arabia and Bahrain) asked Qatar to severe ties with Iran, but Abu Dhabi itself never did so! In fact, UAE enjoys excellent economic relations with Iran.

All in all, the MESA seems to be a highly unrealistic idea in the current situation. While the U.S. can still utilize these countries individually, there is no single evidence which suggests that it will manage to make use of their collective capacity as a single bloc. Furthermore, if Trump is not willing to drop the so called “deal of the century” and put pressure on Saudi Arabia and UAE to reconcile with Qatar to breathe life into the dead body of the GCC, then it will be safe to assume that MESA initiative will never see the light of the day.