Çakmak neither commented on the difficulties of his life, nor was he in expectation of any material gain. The only thing he wanted from his people was for them to be with their amputee team on that night. 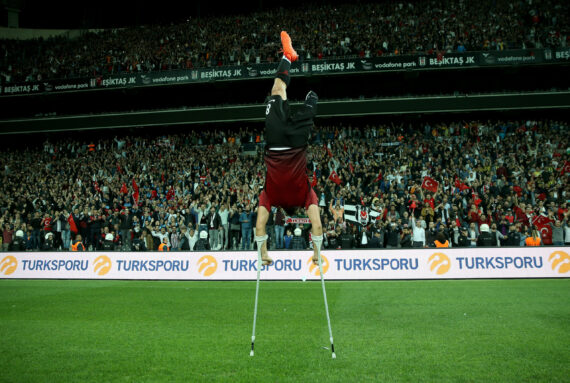 A player of Turkey celebrates the victory after winning the cup in the European Amputee Football Federation (EAFF) European Championship final match between Turkey and England at Vodafone Park in Istanbul, Turkey on October 9, 2017. Anadolu Agency

This October, Turkey hosted the 2017 amputee football championship. All of a sudden, the European Amputee Football Championship withdrew many of us from the country’s busy political agenda. With 12 national teams competing, the tournament lasted a week long. All matches were played at the Turkish Football Federation’s Riva premises – except one.

Throughout the 7 days the tournament was played, increasing attention on social media heightened the public’s awareness and once again reflected the power of social media in today’s society.

It isn’t the first time the Turkish Amputee Football Team competed on such a level, as they had been awarded medals on this degree before. However, team members repeatedly brought to the fore the fact that the tournament was held in Turkey altered the meaning of their experience. For the first time in front of their own people, in their home country they were able to play football just like they dreamed of when they were children. Osman Çakmak, captain of the Turkish team, was the name that delivered this message to us. After defeating Poland in the semi-finals, he was the one that stated the team’s desire to play the final match at Vodafone Park – Turkey’s newest and biggest football stadium. What could have been done to fulfill this dream? This is where social media began to play its role. Day-in-day-out social media users tweeted in regards to this issue, and the match which was scheduled at 17.00 was changed to 19.00. The Turkish team was confident that this match was going to break their audience record of 13,000 – which was reached during the match with Argentina. However, were we, as the Turkish public able to hear their voices? How did we respond as a society?

While the stadium was packed minutes before the match, this wasn’t enough. It was during the hours of 19.00 that inflows of people begun into the stadium – approximately 40,000 people. This was more than a dream for an amputee player. The players, who are sincere football lovers, were treated as ‘real’ football players for the first time. We witnessed many goal joys that we had never seen in our lives before. In fact, for the first time as Turkish fans we celebrated the goals and the finish whistle without fighting each other.

At this point, looking at pictures of the audience would allow one to comment on emotions experienced much clearly. Maybe for the first time a football match was watched with no discouraging expectation, greed or anger; people were there solely for support. Families, friends, supporters of Beşiktaş, Fenerbahçe, Galatasaray and Trabzonspor, people with different political and religious beliefs stood side to side. This is what ought to be: identities were to be left aside in order to stand in support behind the national amputee players. The lore and respect born in Anadolu was reflected in this scenario. Rather than the absurd polemics surrounding the performance of the Turkish National Football Team, sincerity and naivety were attached to the spirit of the amputee team.

While within the story-telling it could seem that grace is at the fore, looking at the lives of the amputee players tells us different. For instance, team captain Osman Çakmak is a war veteran. On military duty in Turkey’s Şirnak province, after stepping on a mine he lost his leg. While it became obvious that he was to experience various difficulties in life after this incident, he didn’t give up. Çakmak neither commented on the difficulties of his life, nor was he in expectation of any material gain. The only thing he wanted from his people was for them to be with their amputee team on that night. The Turkish people did just that. The public weren’t there because they felt sorry for the amputee team, but because a successful sportsman and an honest citizen wanted to lift the cup in front of his own people. This is the sole reason why 40,000 people took their seats at Vodafone Park, while the rest of Turkey watched from their televisions at home. Within this atmosphere and emotion the amputee football team received the championship cup. This was not only an unforgettable moment for the nation but more for the Amputee National Team.

In Turkey, one reason behind the problematic state-sport relationship is the failure of obtaining medals on an international arena. Due to regulations in place, which fail to observe Amputee Football under the Paralympic branch, amputee football players do not receive any honor payments or awards. Another problem with these regulations concern the amount of football teams in the tournament. While legislation surrounding this area require 15, the European Amputee Football Championship only has 12. For this reason, our hopes are that the government take action in order to ensure the amputee football players are treated with justice in their own branch. Taking into consideration previous problems that were encountered in sports in Turkey, the change of regulations should not be an issue.

While it is important for the government of Turkey to re-design regulations surrounding Paralympic sport, the Turkish Football Federation also needs to go through a budget configuration. Apart from the budget obtained from the TFF, sponsorships also contribute excessive amounts. While understandable, the issue with sponsorships are that they approach the issue on a complete economic and financial basis, evaluating profits they will gain. This is clearly evident in other branches of sport too. For instance, especially over the past couple of years immense funding has been pumped in Women’s Football. This investment also brings along sponsorship agreements. Thus, it is not wrong to argue that in the upcoming years we are going to see sponsors dominate football economy.

When taking these factors into consideration, it could be suggested that the same advertisement tactics could be utilized for Amputee Football. In fact, if the government were to open new project options and support and fund these ideas, in the long run this initiative could take us to a different level regarding Amputee Football worldwide. Not only nationally but internationally, the majority of amputee players are war veterans. Therefore, public support for these projects will speed the process of funding and sponsorship within the field of Amputee Football.

What should Amputee Football tell us?

According to figures published by the Turkish Statistical Institute, there are approximately 1.2 million disabled citizens in Turkey. While the championship of the Turkish National Amputee Football Team brought joy and pride to the country, this should also be an opportunity in which we observe the difficulties faced by disabled people and ask ourselves what can be done to better their lives. First of all, we must ask ourselves: what are we doing and what can we do? While we live with people with disabilities, why do we ignore and dis-regard their living spaces? For instance, why do we park our cars in their parking spaces, or why do we not prioritize their use of lifts? This list could continue. While the Turkish public responded to a simple call from an amputee player by attending Vodafone Park, we should reflect this sensitivity in our daily lives. We shouldn’t privilege Osman Çakmak just because he is a Professional football player, as others living his life standards may not find the chance to express themselves like he did. Is it not morally wrong to expect a disabled citizen to have an extraordinary life story in order to be shown sensitivity and respect?

The atmosphere created by the National Amputee Football Team championship has formed a new responsibility area for the Turkish people. From now, we ought to follow and support all disabled sportsmen and women in order to ensure they are aware of the fact that we stand with them. The sports media in particular should drive more attention in this area, as this is important in order to make sure our disabled sportsmen and women feel as they belong to Turkish society and as part of this sector.

In our country we have a Turkey Physical Disabilities Sports Federation. For this reason, we can easily follow all organizations through this structure. The branches under the Federation are as follows: Amputee Football, TS Basketball, Arm Wrestling, Horse Riding, Swimming, Archery, Sailing, TS Tennis, Badminton, Athletics, Voleyball, Table Tennis, Weight Lifting, Boccia, Skiing, TS Dance, TS Curling, TS Fencing. I’m sure there is at least one sport within this list that we all closely follow.

My final conviction surrounding this issue is the hope that we are able to carry these feelings we have experienced in the past few days into the long-run and that we do not forget to remain sensitive in regards to disability rights.

Mustafa Taki Kurtoğlu is currently pursuing his MA in Sociology, with a particular focus on sport sociology, at Beykent University. Kurtoğlu is also the current Education Coordinator at SETA Istanbul.