An Alternative View of the 28 February Coup

What was the February 28 coup? It was a special moment in Turkish politics. It was a moment of the political. The political moment showed that the Kemalist regime is neither eternal nor natural. 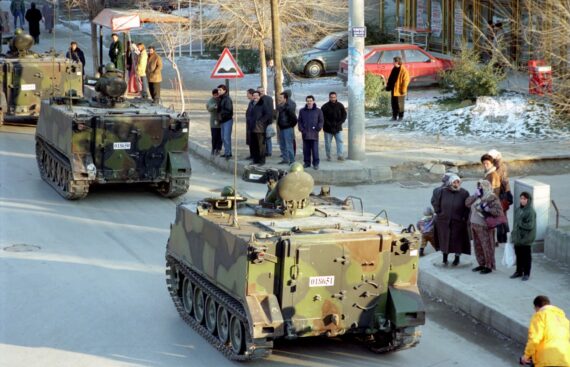 Military tanks in the streets of Ankara during the 28 February, 1997, coup. Anadolu Agency

With the help of Kemalist civil society elements, in February 1997, the Turkish army toppled the government that was formed by the Islamist Welfare Party (RP) and the right-wing liberal True Path Party (DYP). The coup was called a “postmodern” coup, owing to the indirect role of the army. The army did not take control of the rule in the country as it had done twice after the 1960 and 1980 coups. It threatened the government that if it did not step down, then the army would intervene and take control of the country’s rule.

Indeed, the army was restless from the beginning of the RP-DYP coalition government. It was deemed as another nail in the coffin after the landslide victory of the RP in the 1994 local elections. In 1994, the RP won many of the municipalities in the country, including Istanbul and Ankara. The army was very well aware that losing Istanbul and Ankara was a sign of a coming political revolution that might carry away the Kemalist regime. They are the most crowded cities and in the meantime, the election results in these cities carry a symbolic meaning for the general elections and the power relations in the country. Whoever rules Istanbul, rules the country.

On its 22nd anniversary, the February 28 coup was still able to stir a heated debate in Turkey. The opponents of the coup take a liberal-democratic stance and portray it as great political violence. They argue that the coup was a suppression of the basic rights of the conservative-religious sections of society by an authoritarian state.

According to the defenders of the Ferbruary 28 coup, it was a “process,” which implies the eternity of Kemalist rule in Turkey, that was interrupted after the Kemalist state bureaucracy lost its political struggle against the AK Party in the 2000s.

The proponents of the coup on the other hand take a national security stance and defend it on the basis of the struggle against the infiltration of religious reactionary groups such as the Gulenists into state structures. They argue that had the February 28 coup been successful, the July 15, 2016, by the Gulenist cadres in the state bureaucracy, including the army, would have not taken place. According to the defenders of the Ferbruary 28 coup, the February 28 “process,” which implies the eternity of Kemalist rule in Turkey, was interrupted after the Kemalist state bureaucracy lost its political struggle against the AK Party in the 2000s.

These two alternative narratives fail to understand the political meaning of this critical event. February 28 is a way more important event for Turkish politics than what these narratives tell us. It can be reduced neither to authoritarianism nor to a national security matter. According to the standing 1982 Constitution, Turkey in essence, was not a democracy at that time. Due to the lack of a better world, the regime was said to be democratic, which means that the political rule rests on the national well, yet major decisions were taken by the National Security Council (MGK). The army-dominated MGK was the governing body of the country, and the elected government was only playing a minor role in it. The regime was therefore an oligarchy, based on the rule of the coalition of bureaucracy and big business. Thus, the coup cannot be viewed as an attempt to transgress democracy. How can a non-existing thing be violated?

Then, what was the February 28 coup? It was a special moment in Turkish politics. It was a moment of the political. The political moment showed that the Kemalist regime is neither eternal nor natural. It is rather contingent, like all other political regimes. This was a huge blow to the regime, since its political legitimacy and strength was based on the perception of its naturalness and everlastingness. The coup and the events that opened the way for it opened up an un-repairable crack in the Kemalist political totality.

What was the February 28 coup? It was a special moment in Turkish politics. It was a moment of the political. The political moment showed that the Kemalist regime is neither eternal nor natural. It is rather contingent, like all other political regimes.

Thus, the coup was a futile attempt to hide the groundlessness of the existing Kemalist political order. It was a hopeless attempt to over-turn the dislocation of the regime at the face of sociological developments. That’s why the Kemalists were claiming that February 28 was a “process,” not a onetime strike at the national will, and would “continue for a millennium.” And that’s why it was handled in such a ruthless manner.

This political dimension of the coup explains why the Kemalist regime was easily toppled within the period during the early 2000s. If the liberal-democratic critique of the coup was correct, that is that the Kemalist regime was notoriously powerful to crush the national will and encroached on democracy, it would not have been possible for the AK Party to dislocate it from such power in a short period of time. And Turkey would not have evolved into a democracy in the following years.