Ankara and Washington on the upcoming crises: northern Iraq

Following a meeting with the UN Iraq Envoy Jan Kubis, in a statement Iraqi Foreign Minister Ibrahim Jaafari stated that he was told “The UN is ready to help you solve the problem with the KRG. The international community supports the territorial integrity of Iraq.” 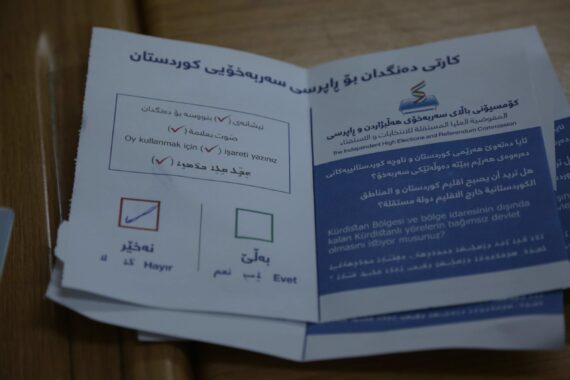 A ballot, signed as "NO" is seen as officials count ballots at a polling stations after the controversial referendum for an independent state of Iraqi Kurdish Regional Government (IKRG) on September 25, 2017. Anadolu Agency

Following the KRG-initiated Kurdish independence referendum, which took place in KRG-controlled areas in northern Iraq, the U.S. has re-emphasized that it is willing to act as a negotiating power between Erbil and Baghdad.

While criticized by the international community – Turkey, Iran, U.S. and UN were against the referendum – according to the Anadolu Agency, official preliminary results revealed that 93 percent of voters backed the independence.

On Thursday State Department spokeswoman Heather Nauert told reports that “The United States, if asked, would be willing to help facilitate a conversation between the two [Erbil and Baghdad].”

Reiterating that the U.S. would only act as a mediating factor if asked, Nauert added “But I want to be clear about that – if asked. If we were asked to assist in any way.”

Following the outcome of the vote, later on Thursday the Iraqi Foreign Ministry announced that the UN offered to mediate between Iraq’s central government and the KRG.

Following a meeting with the UN Iraq Envoy Jan Kubis, in a statement Iraqi Foreign Minister Ibrahim Jaafari stated that he was told “The UN is ready to help you solve the problem with the KRG. The international community supports the territorial integrity of Iraq.”

The statement added that “Iraq has become the center of attention for the whole world, especially after its victory against the Daesh terrorist organization.”

Jaafari called for the UN to play a more effective role in Iraq and pointed out that all Iraqi provinces contributed to the country’s fight against Daesh, which showed sectarian and ethic unity inside Iraq.

Following the decision announced by the Turkish Consulate in Erbil that flights from Turkey to northern Iraq would be suspended as of Friday, Turkish Foreign Minister Mevlut Cavusoglu said that the government would help citizens to leave the KRG region.

“We will use all means available to help our citizens who want to return to Turkey.”

Cavusoglu reminded that the Turkish government had issued travel warnings for Turkish citizens prior to the referendum.

The Foreign Minister added that “We may send planes with special permission [to evacuate the citizens] in the coming period. The decision [whether to stay or leave] of our citizens is important.”