Among such diverging priorities, Turkey, Iran and Russia will need to give each other benefit of the doubt rather than assuming the worst, which, in this case, would be spoiling the accommodation process and pursuing their maximalist, or best-case scenarios at the cost of the other two. 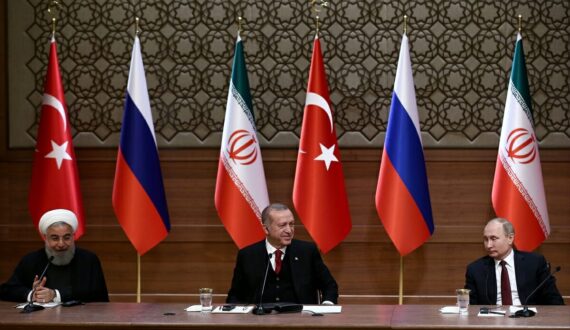 Recep Tayyip Erdogan, Vladimir Putin, and Hassan Rouhani, the presidents of Turkey, Russia and Iran, met in Ankara on April 4 and they, once again, pledged to work together to conclude the everlasting war in Syria. The summit was the second of its kind following the Sochi meeting of last November and will be followed by another tripartite summit in Tehran. While the three countries diverge on a number of issues regarding Syria from the future of the Syrian regime to their threat perceptions, “Syria’s territorial integrity is sine qua non” for them as Erdogan said in the joint conference after the summit in Ankara. All three actors pursue to keep Syria’s territorial integrity intact despite their different rationales, methods and instruments for this goal. More, all three actors give each other the benefit of the doubt as they go through serious tests of their commitment to the tripartite cooperation.

While Turkey desires a future Syria with no piece of it under the PYD’s control, it wants Turkey-backed actors, such as the National Army (formerly the Free Syrian Army), to have its fair share of power in the new status quo to be built. The least Turkey expects to achieve is to contain the PYD zone and place a security belt between its forces and the Turkish territory. The most it expects, on the other hand, is to establish a new government in Syria which will include Turkey-backed actors in charge. Turkey’s best-case scenario has no place neither for Assad nor for the PYD in the whole or part of Syria.

Iran, on the other hand, is the strongest advocate of returning to the pre-war status quo in Syria. The most it expects to achieve is to hand the Assad regime the perfect control over the entire country so that it can have its proxy power to trouble its long time regional rivals such as Israel, Saudi Arabia, and if circumstances dictate, Turkey. This way Iran seeks to have a contiguous sphere of control from Iran to Iraq, Syria and Lebanon. The members of this bloc would not only choose to cooperate and build an alliance with Iran but they would also be ruled by rulers with deep and genuine allegiances to Iran. These countries, in Iran’s best-case scenario, will also be protected not only by their national armies but also by Iran’s militia forces being planted into their armies. While this is the perfect scenario for Iran, the least it can be satisfied with is to maintain Assad’s rule at least in Damascus if not in Idlib, Raqqa, or Haseke.

Russia, as the key actor that coordinates Turkey’s and Iran’s diverging perspectives on Syria, desires to drive U.S. out of Syria in its best-case scenario and contain the U.S. sphere of influence in the east of the Euphrates in its not-so-good but acceptable scenario. Russia has no commitment to Assad as an individual leader or to Iran’s project of building the new Persian Empire. Assad’s presidency or Iran’s militias in Syria are nothing more than simple instruments to contain U.S. expansionism within Syria.

While a level of discrepancy surely exits amongst the future projections of these three countries, their prospects of Syria are not entirely incommensurable. They are for sure willing to work together in order to keep Syria as a single unified country against the U.S. attempts to carve out a chunk of it to be handed to the PYD. While Turkey-backed rebels and Iran-backed regime forces are on the opposite sides on the ground, Turkey and Iran, as the sponsors, have the capacity to tone down the conflict and start a negotiation process between the rebels and the regime.

A version of territorial power-sharing between the Turkey-backed rebels and Iran-backed regime can maintain the conflict in low intensity until all three parties reach an agreement over the future of Syria. Such an arrangement relies on the idea that Turkey and Iran – with Russian backup – will be satisfied with the less of two evils rather than pursuing their best-case scenarios immediately. For Turkey, the lesser evil is Assad ruling a part of Syria rather than the whole, while the PYD remains Turkey’s main concern. For Iran, the lesser evil is Assad ruling part of Syria rather than none while Israel and Saudi Arabia remain as Iran’s main concerns. For Russia, the lesser evil is accommodating Iran and Turkey’s diverging concerns rather than pushing for an all-Russian initiative.

After all, that’s Russia’s only shot to be able to balance U.S. presence in Syria. Among such diverging priorities, Turkey, Iran and Russia will need to give each other the benefit of the doubt rather than assuming the worst, which, in this case, would be spoiling the accommodation process and pursuing their maximalist, or best-case scenarios at the cost of the other two.