Another Bumpy Week in US-Turkey Relations

The continued U.S. insistence on the use of the general category “Kurds” to describe the YPG forces in northern Syria is a major irritant for Turkey and a seemingly deliberate effort to legitimize the PKK. 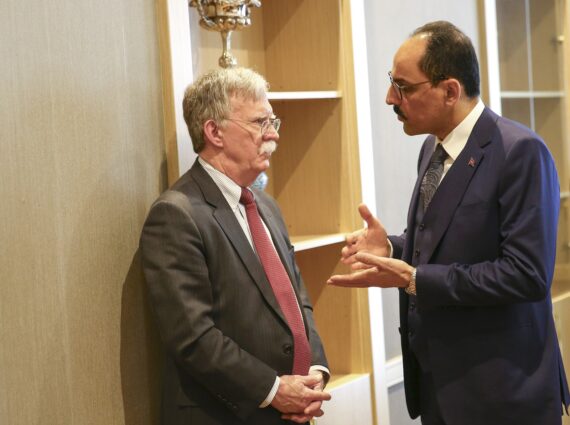 President Trump’s National Security Advisor John Bolton’s visit to Ankara ended up causing more controversy than creating a common ground to work toward a serious strategy. In a previous column, I had warned that “if the U.S. tries to impose conditions on Turkey that may be understood to impinge on Turkish national security requirements, it will mean we are up against the hill once again.” Bolton’s comments prior to his arrival in Turkey were received in Ankara precisely in this vein, drawing the ire of President Erdogan who ended up refusing to meet him in person. Bolton had remarked that Turkey must “meet the president’s requirement that the Syrian opposition forces that have fought with us are not endangered.” These did not seem isolated remarks as some senators suggested that the U.S. withdrawal would result in Turkey “slaughtering Kurds” while Secretary Pompeo tried to reassure them using a similar language. Beyond demonstrating once again that the U.S. lacks a clear strategy, it is struggling to set the right tone in its cooperation with Turkey during the Syria withdrawal process.

Turkey took Bolton’s comments not only as impinging upon its right to protect its national security but also as an insult since Turkish policymakers consistently make a clear distinction between “Kurds” and the U.S./EU designated PKK terror organization as well as its affiliates like the YPG. Nevertheless, President Erdogan emphasized that President Trump’s withdrawal decision would remain the main point of reference for Turkey. Ankara has been ready to coordinate the withdrawal process so as to ensure there is no political vacuum on the ground and there is no Daesh comeback. Turkey is also looking for ways to protect its border by denying the PKK-linked groups safe havens or autonomous regions in northern Syria. It has been the main source of dispute with the U.S. for more than four years and it is not logical to expect Turkey to give up on this national security requirement now as the U.S. withdraws.

The perception in the U.S. that Turkey is somehow against “Kurds” is a deep source of frustration as much as disturbance for Turks since high-level U.S. officials are fully aware that the U.S. “partners” with the Syrian branch of the PKK in northern Syria.

Furthermore, the perception in the U.S. that Turkey is somehow against “Kurds” in general is a deep source of frustration for Turks. The U.S. debate around what happens to the “Kurds” after the U.S. leaves Syria has been particularly disturbing, especially since the high-level U.S. officials are fully aware that the U.S. “partners” with the Syrian branch of the PKK in northern Syria. The continued U.S. insistence on the use of the general category “Kurds” to describe the YPG forces in northern Syria is a major irritant for Turkey and a seemingly deliberate effort to legitimize the PKK. This conflation of terms will surely complicate matters in the days ahead and risks derailing Turkish-American cooperation.

The public messaging problems are not in short stock in an age of President Trump’s Twitter diplomacy. In one of his latest tweets, he seemed to warn against Turkey “hitting” Kurds resulting in dire economic consequences for Turkey while warning “Kurds” against provoking Turkey in a second tweet. Turkey was quick to reiterate the distinction between the “Kurds” and the PKK related groups as a response. Soon afterwards, President Erdogan spoke with Trump on the phone on Monday and Trump’s Twitter feed suggests a 20-mile buffer zone was part of the talks. Such a zone could reassure Turkey and potentially ensure a PKK/YPG-free area along the Syrian border. Despite such acknowledgement of Turkey’s security concerns, however, Press Secretary Sarah Sanders’ readout referred to the need that Turkey does not “mistreat the Kurds and other Syrian Democratic Forces with whom we have fought to defeat ISIS.”

The continued U.S. insistence on the use of the general category “Kurds” to describe the YPG forces in northern Syria is a major irritant for Turkey and a seemingly deliberate effort to legitimize the PKK.

This past week has shown once again that the coordination of the U.S. withdrawal from Syria and reassuring Turkish national security concerns will not be an easy task. The process will be subject to public messaging troubles as well as the U.S. domestic political pressures on President Trump, who seems to feel that he needs to address congressional pushback about the need to protect “Kurdish allies.” The road ahead promises to be bumpy but there is still ample room for significant coordination during the U.S. withdrawal process. A serious comprehensive strategy will be unlikely to come about any time soon but the frequent dialogue between Turkey and the U.S. will be of critical value despite the public messaging difficulties.