Even in a case where the CHP candidate becomes successful on June 23, the fact is that the German government will have to cooperate with the Ankara administration, led by President Erdogan, until 2023. 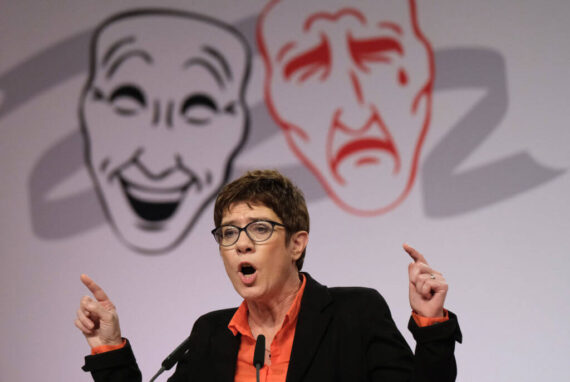 Chair of Germany’s CDU, Annegret Kramp-Karrenbauer (AKK), has recently addressed the re-run of the Istanbul mayoral elections, scheduled for June 23, 2019. By elaborating on the current developments in Turkey, once again, a leading figure in German politics took a biased position with regard to elections in Turkey by openly supporting the opposition in a foreign country.

In her recent address during an election campaign in the Western German city of Duisburg, AKK described participation in the upcoming European election in Germany on 26 May as a sign of solidarity with the Turkish opposition. Besides this, AKK stated, “we have seen in Istanbul that a democratic decision has been overturned because the president in Turkey did not like the results.” AKK continued and blamed the Turkish government by stressing, “this shows that a safe and free choice is not self-evident everywhere in the world.” AKK once again referred to the European elections by stating her wish “that a strong turnout on May 26 would set a signal that makes it clear that election, that vote, is worth something, and we vote for everyone in the opposition in Turkey who do not have the freedom to do that. This too is a sign of solidarity.”

It has become habitual for German conservatives to address Turkish politics in a negative way.

Unfortunately, it has become habitual for German conservatives, who are trying to reach for far-right and populist votes, to address Turkish politics in a negative way. Besides the obvious leftist and far-right figures criticizing Turkey, it has become common for conservative members of German politics to criticize Turkey without accurate information, basing their arguments on populism. By this, it’s obvious that other similar election experiences in European states in the past are disregarded and likely deliberately not taken into account neither among conservative nor other left-liberal circles.

Without going into depth, just remember two re-run examples: First, in 2016, the constitutional court in Austria ordered a re-run of the controversial presidential election’s second round. This happened during an era when the rightwing candidate Hofer came close to being the next president of the country. When Hofer lost the race against the left-bloc’s candidate, van der Bellen, Hofer subsequently went to the constitutional court where he succeeded.

Annegret Kramp-Karrenbauer signals to differentiate herself from her ally in terms of populist policies and statements regarding Turkish politics.

The reason why the court cancelled the election was: “irregularities in the way postal votes were counted were sufficiently serious to require an unprecedented re-run of a national contest.” Subsequent to this decision, there was no harsh criticism particularly among German politicians. In comparison, one should remember how German politicians and even all Germany-based media outlets criticized the decision to re-run elections in Istanbul and openly supported the Kemalist-nationalist CHP’s mayoral candidate.

AKK, who is known for her close alliance with Angela Merkel, will most likely differentiate herself from her ally in terms of populist policies, statements, and in particular, one-sided elaborations of Turkish politics.

The second example is the Brexit referendum result in 2016, which most Germans and even CDU members did not like. Despite its obvious democratic character, many German politicians either directly or indirectly called for a re-run of the referendum – despite their being no irregularities. Nevertheless, for instance, the Foreign Policy Spokesman of the CDU/CSU, Jürgen Hardt, openly stated, “Brexit will not take place. At the end of the day there will be a second referendum. Then, in fact, the supporters of the British in the EU will gain the upper hand.”

As one can notice, there is quite an ambivalent tendency according to which German policy makers are either able to support the idea of a re-run – even when there are no irregularities – (for instance the Brexit case), or keep silent in terms of decisions regarding irregularities due to postal votes. Of course, these awkward positions among German policy makers may have their own reasons, but why so much prejudice and bias when it comes to Turkish politics?

All in all, it becomes increasingly obvious that the former secretary general of the CDU, AKK, who is known for her close alliance with Angela Merkel, will most likely differentiate herself from her ally in terms of populist policies, statements, and in particular, one-sided elaborations of Turkish politics. By this, she most likely will be inclined to compete with already far-right and leftist circles. Given the continuing use of prevailing anti-Turkish government discourse without any reflection regarding the opposition camp in Istanbul, the German CDU might continue to insufficiently understand the dynamics of Turkish politics. By this, one should stress that there has never come accurate criticism with regard to Turkey’s CHP and its gradually established one-man leadership around Kemal Kilicdaroglu – a leader that is yet to achieve any national success.

Even in a case where the CHP candidate becomes successful on June 23, the fact is that the German government will have to cooperate with the Ankara administration, led by President Erdogan, until 2023. Lastly, one should also not disregard the fact that the CHP and its allies are not the only representatives of Turkey’s opposition.