Germany’s political parties are going through a period of transformation. Whether these ongoing developments might challenge the current political landscape will most likely be shaped in the upcoming years until the next federal election in 2021. 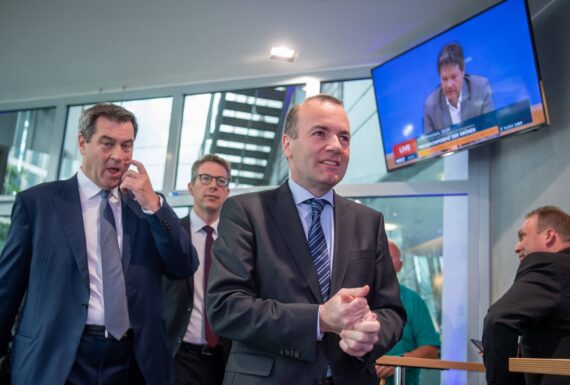 Manfred Weber (r, CSU), leading candidate of the CSU, CDU and EVP, and Markus Söder, CSU party chairman, will go together to a press conference at the CSU's party headquarters. In the background, Robert Habeck, Federal Chairman of Bündnis 90/Die Grünen, can be seen on a screen during a live broadcast. May 2019, Getty Images

Since 2005, Germany’s strongest conservative party, the Christian Democratic Union (CDU) party, has undergone a quite remarkable transformation process during the Merkel era. Entering politics in former East Germany, Angela Merkel was politically active subsequent to the reunification of both German republics in 1990. Under former German Chancellor Helmut Kohl (CDU), who is known for his conservative opinions, Merkel became a minister in the early 90s, the party’s chairperson in 2000, and ultimately Germany’s first female Chancellor in 2005. Merkel has gradually made efforts to transform, or carefully stated, “to open” the traditional CDU in the direction of a rather liberal and migration friendly perspective. Furthermore, Merkel introduced policies considered to be much more line with those from social-democratic  environmental circles. Such as the goal to shut down all nuclear plants in Germany by 2022, the suspension of compulsory military service in Germany, allowing dual citizenship, and legalizing “marriage for all” in Germany.

By this, the conservatives received wide support from former critical circles while also transforming the CDU’s traditional electoral base to a certain degree. On the other hand, new parties have been established as a reaction to the perceived lack of an actual conservative party. Furthermore, far-right and even racist parties have become more successful in this period, reducing the traditional votes of the CDU.

While taking these developments into consideration, some interesting statements made recently by two of Germany’s major political parties have to be stressed.

First, the federal government’s conservative coalition partner and the CDU’s sister party, the Christian Social Union (CSU). Markus Söder, the CSU’s chairperson and minister-president of Bavaria, Germany’s largest state, recently stated that climate action should become a binding task for the state. He called for enshrining this action in Germany’s Basic Law, i.e., Germany’s constitution. This call resembles long-standing demand made by Germany’s Green Party, which the CSU had opposed the past. Furthermore, under the leadership of Söder, the CSU  aims to adopt their own federal climate concept in September 2019, which will also focus on issues such as a climate budget and proposals to reform the so-called motor-vehicle-tax.

The second recent statement of significance came from the Green Party’s co-leader Robert Habeck, a politician whose increasing popularity, is also mirrored in the Green party’s increasing popularity among voters according to current polls. Interestingly and not typically, Habeck called for greater efforts in fields of  ​“domestic security”. According to the Green Party leader, if someone does not respect the liberal-democratic values, one has to face the full pressure of the police. Actually, not strange statement for a usual political party in a democracy, however, Habeck stated these words during a talk with the chairperson of the Union of Police (GdP) Oliver Malchow.

Of course, no democrat should be surprised that a politician stresses the legitimate importance of a country’s police and its legitimate forces. However, it seems a bit interesting that more recently, Söder and Habeck are speaking in a way that is more traditional for the opposing party.  This becomes even more interesting if one notices that Habeck also recently stated that he can quite imagine active participation of Germany with regard to the Hormuz crisis on the side of a European mission – a statement which once again resembles the CDU/CSU’s traditional stances in contrast to the center-left Social Democratic Party (SPD), whose current foreign minister Heiko Maas ruled out such a possibility right at the beginning of the crisis. In the same sense, the CDU’s chairperson and the country’s new defense minister –and potential future Chancellor– Annegret Kramp-Karrenbauer preferred a rather conciliatory note regarding the Hormuz issue, by implying that a final decision had not been made.

Ultimately, it seems that Germany’s political parties are going through a period of transformation. Whether these ongoing developments might challenge the current political landscape will most likely be shaped in the upcoming years until the next federal election in 2021. Therefore, one should not be surprised if a new coalition constellation will be formed. At least some signs can currently be observed.