Are the Fault Lines in the Global Economy Starting to Crack Again?

The world is switching from pure globalism to one in which countries will try to protect their own industries as much as they can in order to increase value added growth, create more jobs in their territories, and balance their current account. 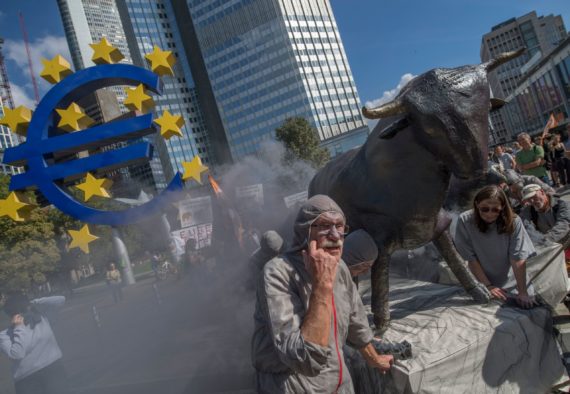 Activists of campaigning movement 'attac' are dressed as 'slaves of the Financial system' as they rally in front of German artist Ottmar Hoerl's sculpture depicting the Euro logo at the old buildings of the European Central Bank ECB in Frankfurt am Main, on September 15, 2018 on behalf of the 10th anniversary of the collapse of US investment bank Lehman Brothers which unleashed a global economic crisis. Getty Images

Ten years has passed since the Lehman Brothers went bankrupt. This was the tipping point in which the American mortgage meltdown turned into a global economic catastrophe. The Global Financial Crisis (GFC) hit the world economy sorely. Economic growth slowed down drastically, unemployment rates and income inequality increased, which paved the way for the rise of far-right politics, the purchasing power of ordinary people decreased significantly, and any trust left in institutions collapsed.

Four major global central banks – the FED, European Central Bank (ECB), Bank of England, and the Bank of Japan – injected around $13 trillion in order to revive economic activity since the GFC. Economic growth figures have improved in the last couple of years. However, it is questionable as to whether the real economy and the banking system will stand on their own feet, and whether this growth performance is sustainable at a time when the FED is increasing interest rates and the ECB is going to end quantitative easing (QE) soon. The money pumped into the global economy has not been channeled into productive areas such as R&D, education, or infrastructure, but rather has been used mostly for bailouts and stock buybacks. Quantitative easing programs of central banks inflated asset prices artificially, leading to a big stock market bubble, which is expected to burst soon. Banks preferred sitting on a lot of cash, driven by the QE, instead of providing credit to ordinary individuals and small and medium-sized firms. While the U.S. was late in implementing counter-cyclical fiscal policies, some EU countries took austerity measures. All these policy mistakes caused an increase in income inequality and made economic growth performances fragile.

The unemployment rate in the U.S. declined to 3.7 percent in September 2018 – the lowest rate since 2000. While many economists and analysts interpret this figure as the reflection of a strong American economy, the reality is that the job market is not in a perfect position, as is suggested by many. The real wages of the middle-class have stagnated for decades. The quality of jobs has decreased. People cannot find full-time jobs that they desire, and have to work in more than one part-time job in order to balance their budget. On the other hand, some people get tired of looking for jobs so desperately and leave the labor market, which means that they are not officially considered unemployed.

Many structural reforms related to the financial industry, promised by the G20 leaders, have not been implemented yet. Too-big-to-fail banks have even added to their growth in 10 years. U.S. President Donald Trump is now trying to dismantle the Dodd-Frank Act, a comprehensive financial markets regulation to control systemic risks. The oligopolistic structure of international credit rating agencies has still not been changed. Some European banks still suffer from band loans problems. The IMF’s capacity to combat a fully-fledged global crisis is questionable, even after some belated reforms that were implemented after the GFC.

Global debt ballooned almost 50% after the GFC, climbing to $247 trillion in total. As interest rates are rising on a global scale, concerns about the repayment of this debt are also increasing. The total debt of the non-financial sector has skyrocketed since the GFC, especially in developing countries. This situation has been reducing the risk appetite of foreign investors towards developing countries, which in turn increases the volatility of their currencies and reduces their economic growth rates.

Global imbalances, especially savings-investment imbalances in the U.S. and China continue to pose some threats to the stability of the global economy. Thanks to its newly rising middle-class, China has been diverting its growth model from an export-led to demand-led one in the past years. However, China still provides a huge amount of trade surplus, and it will take years to balance its domestic demand and national savings. The U.S. on the other hand, has both a public and trade deficit. While Trump’s tax reform is likely to increase the public deficit, his trade war plan will not work to reduce the trade deficit.

The trade war, fired up by the Trump administration, puts global trade and global value chains at risk, causing a decline in global economic growth forecasts. Trade disputes will not provide any benefit, but will only hurt global economic activity. Although there are many unfair issues in multilateral trade agreements and the WTO rules, international trade has increased global economic growth, has reduced global inflation, and has lifted millions of people out of poverty. Global leaders, bureaucrats, and intellectuals should focus on making the rules of the trade game fair, not on bringing the system down in ruins.

In the end, we cannot draw a rosy picture about the future of the global economy. As economists, we do not have a crystal ball that allows us to foresee the future more clearly. However, all these risks and fault lines indicate that the global economy may experience a shocking turbulence, or even a recession, in 2020 or 2021.

Beside this, as Trump said in his UN speech last month: “We reject the ideology of globalism and we embrace the doctrine of patriotism.” The world is switching from pure globalism to one in which countries will try to protect their own industries as much as they can in order to increase value added growth, create more jobs in their territories, and balance their current account. Trump assumes that implementing new protectionist actions will bring giant factories back to the U.S. and provide some competitive edge against developing countries such as China, which have the potential to reduce the share of the U.S. in the global economy. This can be a topic of a different article, but we can shortly mention that such protectionist periods offer more opportunities for developing countries, which use smart industrial policies to produce technological products themselves and give them the opportunity to catch up with developed countries. The East Asian miracle is a good example of this. Countries that prepare themselves for this new period in advance by taking precautionary measures and implement appropriate policies in line with the spirit of time will increase their weights in the global economy.