The international community has reassured Assad that he may be punished for it but using chemical weapons will not spell the end of his regime. There are no signs it will be different this time around. 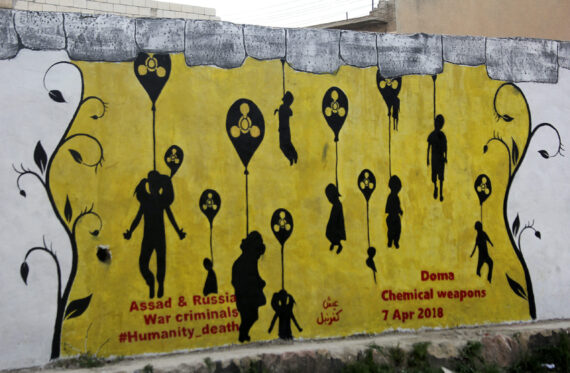 A picture on a wall that describes the poisonous gas attack conducted by Assad regime forces in Eastern Ghouta, April 8, 2018. Anadolu Agency

Assad is at it again. His regime used chemical weapons against civilians in Eastern Ghouta, which has been under attack for weeks. It was about a year ago that Assad used chemical weapons to which President Trump responded with a limited military strike. It was more of a show of force than a shift in policy. Since then, the Trump administration largely continued the Obama administration’s policy in Syria. The administration has continued to focus exclusively on Daesh at the expense of changing the equation in the broader civil war.

The most recent Trump announcement to withdraw from Syria “very soon” appears to have more to do with the domestic public opinion than with creating a new Syria policy. The latest attack in Eastern Ghouta may trigger a military response but it will likely remain limited again and keep the Assad regime in place without creating a new Syria policy. As both Obama and Trump said it in their own way, Syria is ultimately “someone else’s problem” for the U.S. Nor is the American public interested in getting involved in Syria any more than they have already. Ahead of the November midterm elections, President Trump might be interested in another show of strength by punishing Assad without deeper involvement in Syria. And Assad knows this.

The Syrian Civil War is entering its eighth year and the Assad regime has used chemical weapons on multiple occasions without serious consequences. It has gotten away with murder with the backing of Russia and Iran. Yet, the U.S. preferred to play the blame game during the Obama administration. Despite the limited military strikes of last year, the Trump administration is displaying a familiar pattern of blaming Russia and Iran but refusing to provide international leadership to bring an end to the conflict. Taking a lead in Syria would require a lot of political and diplomatic investment in a war which the administration considers someone else’s problem. Russia and Iran are too deeply involved to give up now while the U.S., alongside Europe are unwilling to play a big role. Assad is acutely aware of the failures of the international community.

Both President Trump’s harsh rhetoric (his first direct criticism of the Russian President Putin for supporting Assad) and the French President Macron’s red line statement make it likely that there will be a military response. In fact, the readout of a phone call on Sunday between Trump and Macron mentioned an agreement to “coordinate a strong joint response.” Both leaders can show the Assad regime that they will not tolerate the use of chemical weapons but it has become largely irrelevant for Assad as long as the military response remains limited, narrowly designed not to upset the balance of power on the ground. There is no serious indication that it will be different this time around.

One of the central dilemmas since the beginning of the Syrian civil war has been that the Assad regime has been able to use international indecision and disagreements to its advantage. In its weakest moments, the regime benefited from Russian and Iranian support even at the expense of Syria sovereignty. Facilitating the growth of terror groups at the expense of legitimate opposition, the Assad regime has also helped to turn the attention away from itself. All of this was not out of the regime’s genius but due to its repeated attempts at testing the limits of the Western responses towards the atrocities. The international community has reassured Assad that he may be punished for it but using chemical weapons will not spell the end of his regime. There are no signs it will be different this time around.