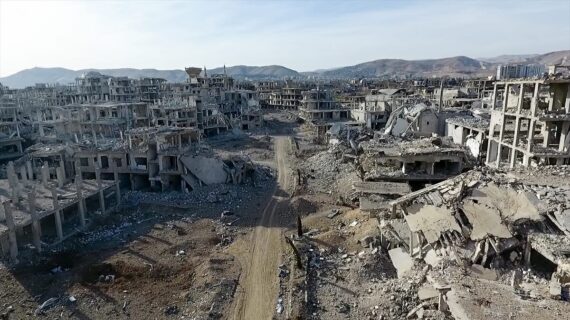 A footage captured by an unmanned aerial vehicle shows wreckages of structures of Arbin town, which has been under siege of Assad Regime, in Eastern Ghouta region, Damascus, Syria on March 09, 2018. AA

The attack came late at night in Eastern Ghouta’s village of Hammuriyah, the civil defense group, known as the White Helmets, said on its social media account.

The posting said that many women and children were affected by the gas but that their number and condition are not yet clear, since intense attacks by the regime and its supporters are ongoing and the roads are closed.

Despite a UN Security Council cease-fire resolution, on March 3 the regime and its allies began a major ground operation — backed by Russian air power — aimed at decisively capturing Eastern Ghouta, an opposition-held suburb of Damascus.

On Feb. 24, the UN Security Council unanimously adopted Resolution 2401, which calls for a month-long cease-fire in Syria — especially Eastern Ghouta — to allow the delivery of humanitarian aid.

Home to some 400,000 people, Eastern Ghouta has remained the target of a crippling regime siege for the last five years.

The regime has stepped up its siege in recent months, preventing the delivery of badly needed humanitarian aid and leaving thousands of residents in need of medical treatment.

Last week, a UN inquiry commission released a report accusing the Assad regime of committing war crimes in Eastern Ghouta, including the use of chemical weapons on civilians, causing mass starvation, and forcibly preventing medical evacuations.