While combat begins to ease, the military makeup of the Astana Process may begin to resemble one of political dialogue going forward. A stage, which if reached would be the first ray of sunlight to peep through the dark clouds of the last 7 years. 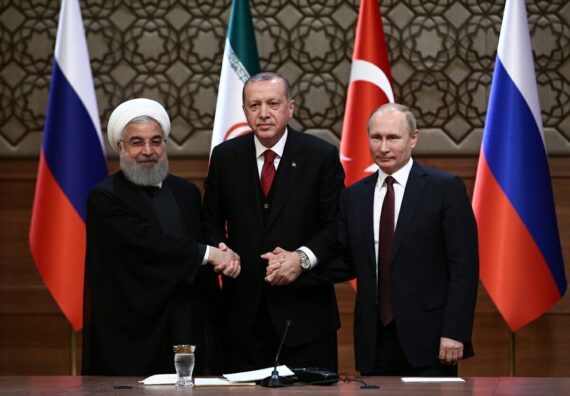 The powers active in Syria have met for the second round of talks to discuss reaching a permanent ceasefire in Syria. Being held in Turkey’s capital city Ankara, the meeting between the Presidents of Iran, Russia and Turkey on Wednesday (04/04/2018) pledged to cooperate on reconstruction and aid, and vowed to protect Syria’s territorial integrity.

Talks come one day after Putin and Erdogan’s meeting cementing the construction of Akkuyu, Turkey’s first nuclear Power Plant to be built in Mersin.

The second trilateral summit of the Astana Process broadly acknowledged the cooperation required to fight terrorism in the region. Highlighting the need for more de-confliction zones to reduce further violence in areas such as Idlib, international support in building infrastructure and humanitarian aid was stressed.

Emphasizing their unified opposition towards “separatists agendas” in the region, achieving a long lasting ceasefire as well as cooperating on determining the most suitable option of what Syria as a state will look like are among the most pertinent questions to tackle. The noticeable difference between the first Sochi summit in November 2017 and Ankara this week however was the absence of Syrian representatives and United States officials.

While the three presidents unanimously agreed on terrorism being the main concern for Syria, President Erdogan stressed the need to counter the YPG/PYD threat it faces along the Syria-Turkey border. Having recently cleared the Afrin region from terrorist activity, Erdogan asserted that Turkey will not stop in the endeavor to clear Manbij and other YPG occupied areas from terrorism, adding; “without peace in Syria, there isn’t peace in Turkey.”

Although Turkey has maintained that the YPG/PKK terror threat is of ultimate concern for the territorial integrity and security of Turkey, the bulk of the YPG controlled areas in northern Syria remain funded by the United States. With mixed statements coming from the White House, which seems to have become the only continuity of the Trump administration, Macron’s statement last week regarding France being a potential mediator of a Turkey-YPG talks together with Trump’s beguiling remarks suggesting ‘an exit could happen very soon may’ holds the potential to once again complicate an already complex region.

With the U.S.’s diminishing role in the region as a power with the capacity to direct the future makeup of the Syrian territories, the ‘Daesh argument appears to have recently become somewhat thin. One indication of the weakening Daesh approach for the U.S was highlighted when Brett McGurk, the special Presidential envoy for defeating Daesh suggested that the “U.S. mission of defeating IS (Daesh) isn’t over, and we are going to complete this mission,” while General Joseph Votel’s speech at the U.S. Institute of Peace in Washington highlighted that “IS (Daesh) forces in Syria had been mainly defeated.” Perhaps if one combined the two statements, it may assist in deciphering Trumpian discourse and his layman explanation of; “we’ll be coming out of Syria, like, very soon.”

Nonetheless, as the U.S. and France attempt to indirectly complicate Syria, Iran, Russia and Turkey still have much to resolve, directly, before the end of the Syrian War can be called.

Although the trio’s negotiations have been a positive step towards reducing conflict and producing a lasting ceasefire, the levels of peace required to achieve reconstruction have been difficult to achieve. Ongoing conflict between various factions of the opposition forces and the Syrian regime have inhibited a concrete result towards reaching a stage of mutual cooperation on the ground. While the Idlib and Eastern Ghouta campaigns have largely subsided, smaller proxy battles between regional forces continue to pop up also. One example has been the clashes between Tahir-al Sham and Jabhat Tahrir Suriya in areas such as Dar Taizzah.

Russia, being Assad’s main source of funding has substantial air power in Syria, having also cooperated with joint operations such as Operation Olive Branch, Iran maintains a heavy presence through its militia proxies which have secured most of Syria’s western coastal regions from the An-Nusayriyah Mountains to the Anti-Lebanon Mountains. Turkey, working jointly with the Free Syrian Army maintains influence of opposition controlled areas alongside full control of Syria’s north-west. While the support of different actors in Syria could create difficulty within the talks going forward, considering the growing bi-lateral relations between the three countries outside of their engagement with Syria, the talks could be a platform for political maturity in establishing peace through their respective allies on the ground.

One topic that will need to be ironed out before reconstruction of Syria can commence, is a political settlement. While all three have adamantly maintained that Syria’s territorial integrity is of upmost importance and suggested setting up a constitution committee for reforms, Russia and Iran have proposed a federal system, whereas Turkey has insisted Syria remains a unitary state. However, a federal system housing the numerous actors, perspective, ideologies and motives could be detrimental in the long-term and lead to further internal conflict.

Similarly, in order for amendments of the Syrian constitution to be successful, support will be needed not only from the UN Special Envoy for Syria Steffan de Mistura, but also from the Syrian Regime and opposition forces. Given Assad’s disdain for the UN, for the time being constitutional reforms appear unlikely.

Even so, as reminded by President Erdogan on Wednesday, the talks are not intended as an alternative for a UN peace process in Syria. The fact remains that while over 400,000 have lost their lives, more than 12 million people need humanitarian assistance, with 5.6 million people having fled to bordering countries. 3.6 million Syrians reside in Turkey. Lebanon and Jordan are the other two countries which have opened their doors to the remaining bulk of refugees.

Albeit, politics may be politics, however Turkey, Russia and Iran in the Astana Process are the only actual presence in Syria with the ability to formulate and initiate peace in a part of the world that has quite simply seen disaster, but appear to have a desire to so too. While certain new European leaders should be wary of becoming a Trump pawn in the region, the reality remains that the three leaders are still in the early stages of achieving actual peace and face the daunting task of establishing security through interests. While combat begins to ease, the military makeup of the Astana Process may begin to resemble one of political dialogue going forward. A stage, which if reached would be the first ray of sunlight to peep through the dark clouds of the last 7 years.