“The patterns of attacks are evidently conducted systematically. The vigilante group torch Rohingya homes, the Rohingya families flee and police open fire at them.” 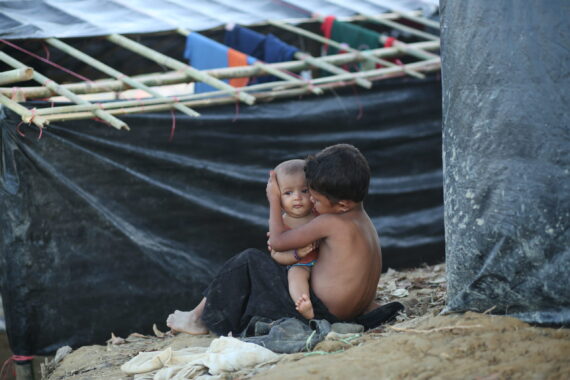 According to a report published by the US-based Arakan Rohingya Union, attacks on the Rohingya in Myanmar are continuing despite the government declaring an end to Myanmar’s military operation in Rakhine state.

The Union made its observation in the “Narrative Report on Situation on the Ground in Northern Arakan/Rakhine State, Myanmar,” noting that Myanmar government officials reportedly met leaders of the Rohingya community and told them that the military had completed its operation and rooted out “insurgents.”

In comparison to this, the report states that “attacks on civilians and torching of homes by Buddhist Rakhine vigilantes under the cover of the police have dramatically increased since then.”

“The patterns of attacks are evidently conducted systematically. The vigilante group torch Rohingya homes, the Rohingya families flee and police open fire at them.”

The report included that information about the “continuous killing of Rohingya families by the vigilantes under the cover of police and increased sexual violence against Rohingya women” was still being received from refugees arriving in Bangladesh.

Appealing for global pressure on the Myanmar administration, the report emphasizes “If they [Rohingya Muslims] will be relocated from camps to permanent locations, it is possible that they will not be allowed to return to their original properties in their villages.”

While the Rohingya crisis was on the agenda during the UN General Assembly last month, the international community has failed to insert pressure on the de-facto leader of Myanmar, former Nobel Peace recipient, Aung San Suu Kyi.

In spite of recent developments and the lack of unity from the international community, the report urged to form a strong coalition “to pressure the Security Council for urgent and ambitious actions, including a resolution to address the crisis facing the Rohingya, and designate a safezone for all people in Northern Arakan state protected by multinational security forces.”

Kerem Divanlioglu, Turkey’s ambassador to Myanmar, was part of a 48-person team including UN officials and foreign diplomats based in the commercial capital, Yangon, who visited the Maungdaw area of Rakhine state on October 2.

Speaking to Anadolu Agency, Divanlioglu said that while Turkey doesn’t have any expectations, the country is helping Rohingya Muslims due to its “humanitarian stance.”

Adding that Turkey does not have a political agenda in Myanmar, he stated that “we’ve kept the dialogue channels open with Myanamar authorities, as we only want to help them in a humanistic way.”

He described how when flying over Arakan [Rakhine state], “I saw many villages that were completely destroyed,” adding that only five Muslim villages in the Rathidaung district were habitable.

Visiting a village, Ah Nauk Pyin, the diplomat spoke to the Muslim community, who he said only wants “safety and food.”

In addition to Divanlioglu’s comments, the Turkish Health Ministry has confirmed that it will send aid worth 196 million Turkish liras ($54 million) to Bangladesh for Rohingya Muslims who have crossed over from Rakhine state.

According to a source from the Ministry, the aid will be delivered through the Disaster and Emergency Management Authority (AFAD).