Baghdad: any deal violating the Constitution will not be recognized

Following calls from the KRG, on Saturday Barzani met with Allawi and al-Nujaifi in Sulaimaniyah for talks aimed at easing tension between the two administrations. 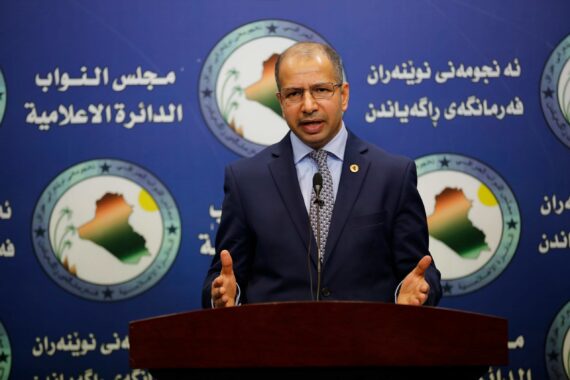 Speaker of the Iraqi Parliament Salim al-Jabouri makes a speech on the current situation of the Iraqi Kurdish Regional Government's (IKRG) Members of Parliaments, who were detected while they were voting in illegitimate independence referendum, during a press conference in Baghdad, Iraq on October 3, 2017. Anadolu Agency

On September 25 Iraqis residing in KRG-controlled areas in northern Iraq voted on whether to declare independence from Iraq.

While the referendum result was announced as 93% in favor, the international community criticized the Kurdistan Regional Government for holding the referendum. Only Israel has openly supported the initiative.

Following the referendum and following the death of former President Jalal Talabani, President of the KRG, Masoud Barzani called for dialogue between Baghdad and Erbil in order to solve issues with the central government.

“We will work to solve problems and differences with Baghdad through dialogue,” Barzani told reporters after he laid a blanket of flowers on the tomb of the former Iraqi President.

“We hope that Talabani’s death will be a chance for rapprochement between all political parties in the Kurdish region,” Barzani said.

Following calls from the KRG, on Saturday Barzani met with Allawi and al-Nujaifi in Sulaimaniyah for talks aimed at easing tension between the two administrations.

According to a statement released from Barzani’s office, the three leaders agreed on starting dialogue between Erbil and Baghdad in order to “calm the tense atmosphere” following the independence referendum.

The three also supposedly agreed on carrying out talks with an open agenda, agreed on lifting sanctions on Erbil and launching meetings between the two administrations as soon as possible.

While Iraqi Prime Minister Haidar al-Abadi called for the KRG to cancel the illegitimate referendum results, claiming that this is the only way talks between Baghdad and Erbil will begin, on Sunday the Iraqi Parliament also decided that an agreement reached between Barzani and Vice-President Ayad Allawi and Osama al-Nujaifi were not binding.

Saad al-Hadithi, a spokesman for the Prime Minister’s Office said in a statement that “the Iraqi administration will not recognize anything violating our Constitution and the attitude of the central government has not changed.”