Barzani fails to survive after referendum

“As a Peshmerga, I will continue at the service of our people; I refuse to get any extension and will not continue in this position; law should not be amended for me.” 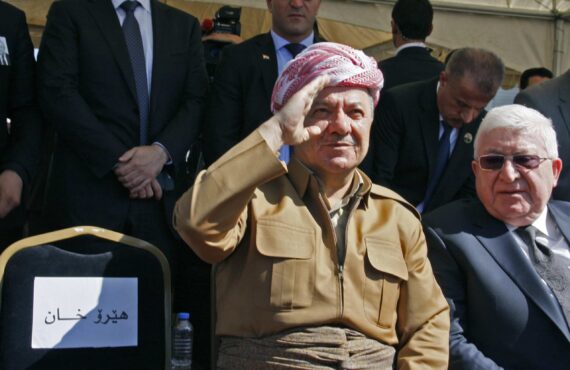 Iraqi Kurdish leader Massud Barzani (L) sits next to Iraqi President Fuad Massum during a ceremony at the airport in the Iraqi Kurdish city of Sulaimaniyah following the arrival of Iraqi ex-president Jalal Talabani's coffin on October 6, 2017. AFP

Following the military operation of the Iraqi Armed Forces in Kirkuk, the KRG leader Masoud Barzani described the withdrawal of the Peshmerga and the handover of Kirkuk to Baghdad as “treason.”

According to Rudaw English, in a televised address, Barzani said: “The Peshmerga and all the people of Kurdistan were stabbed in the back by a poisonous dagger.”

On October 16, Iraqi forces took over Kirkuk from Kurdish elements, which also gave the Baghdad administration control of oil wells in the disputed territory.

Following these developments, on Sunday President Barzani announced that he would not participate in the upcoming November 1 Presidential elections.

A letter read out for the President during the regional government’s parliamentary session stated: “As a Peshmerga, I will continue at the service of our people; I refuse to get any extension and will not continue in this position; law should not be amended for me.”

Aydin Maruf, a parliamentary member from the Iraqi-Turkmen Front, told Anadolu Agency that following a voting process it was later agreed to transfer the presidential duties of Masoud Barzani to the parliament and the Council of Justice.

Maruf also stated that the KRG’s Presidential Council had been abolished.

After the vote, a group of people stormed the regional parliament building, firing shots in the air as they made their way inside.

The group, which claimed to be supporters of Barzani’s KDP, chanted slogans in favor of Barzani and hurled stones at the Parliament building.

Also Read
Erbil Conference on Normalization with Israel Stirs Debates
We use cookies to optimize your online user experience. To learn about our use of cookies and how you can manage your cookie settings, please see our Privacy Policy. By continuing to use our site you are excepting our use of cookies.Accept Cookies & CloseMore Info