Speaking at a news conference party spokesman Shorsh Haji stated: “They have to resign from their posts. At the same time, the Cabinet should also be abolished.” 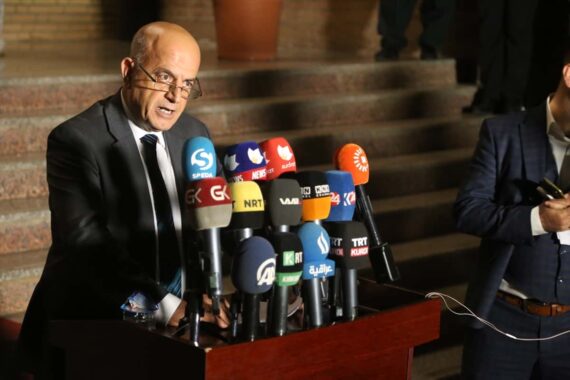 Gorran Movement spokesman Shoresh Haji called for the resignation of Masoud Barzani during a press conference in Suleymaniyah, Iraq on October 22, 2017. Anadolu Agency

Following the Kurdish independence referendum, political and economic sanctions have been imposed on the Masoud Barzani administration. On the basis of protecting Iraq’s territorial integrity, regional and international governments rejected the referendum, except Israel.

While the central Iraqi administration announced repeatedly that they do not recognize the referendum and interpreted it as a violation of the constitution, last week Iraqi forces entered Kirkuk amid the withdrawal of Peshmerga forces.

Successfully taking over Kirkuk, which has been a “disputed territory” and under the control of the Kurdish Peshmerga forces since 2014, Baghdad recently announced that they have sent reinforcement officers to Kirkuk in order to secure oil facilities in the northern city.

Speaking to Anadolu Agency, a local police officer, Capt. Hamed al-Obaidi stated that “Large police troops were dispatched to Kirkuk oil fields as part of a plan to secure oil facilities there.”

Al-Obaidi also confirmed that the Iraqi army will leave the task of securing the oil fields in Kirkuk to the police.

KRG welcomes US call for ceasefire

In response to the ongoing clashes in Iraq, especially since the referendum and the takeover of Kirkuk, the US State Department has called for both sides to cease violence.

On Friday State dept spokeswoman Heather Nauert stated that “The United States is concerned by reports of violent clashes around the town of Altun Kupri in northern Iraq,” adding that the US welcomed Iraqi Prime Minister Abadi’s instruction to federal forces to protect Iraqi Kurdish citizens and not to provoke them.

In response, the KRG welcomed this statement and in a statement claimed it was “ready to cooperate with an international coalition led by the US to support a ceasefire between Peshmerga and Iraqi forces.”

The KRG also added that it welcomed negotiations with Baghdad within the framework of the Iraqi constitution but without any preconditions.

While the loss of Kirkuk and oil fields in the province have been a major loss for the KRG, many have interpreted the KRG’s positive reaction to a ceasefire as a political weakness – such that calls for resignations have been made.

Calls for Barzani to resign

On Sunday The Kurdish Movement for Change (Gorran) Party called on President Barzani and Vice President Kosrat Rasul to resign from their posts.

Speaking at a news conference party spokesman Shorsh Haji stated: “They have to resign from their posts. At the same time, the Cabinet should also be abolished.”

Calling for the formation of a “national salvation government,” Haji added: “Our people have lost many of their achievements which they gained shedding their blood. Peshmerga [fighters] lost their grandeur. We lost many friendly countries. The reason for all of this is due to the failures of the party in power.”