Despite strong international criticism, the Nobel Prize for Literature was awarded to Austrian author Peter Handke. Handke’s open denial of the Bosnian Genocide and strong personal support for the former Serbian President Slobodan Milosevic has raised serious questions as to the integrity of the award. 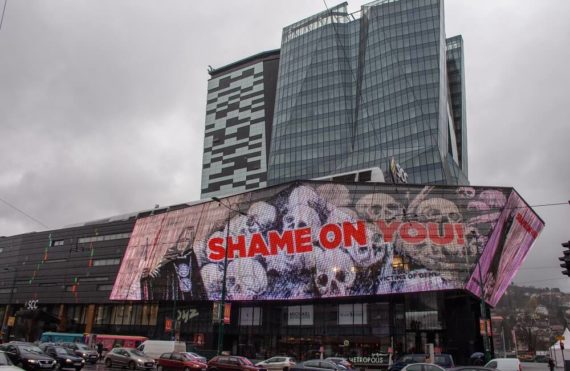 'Shame on you' is reflected on a giant screen in a shopping mall's wall to protest against the awarding of Nobel Literature prize to Australian author Peter Handke, who denied the Bosnian genocide in Sarajevo, Bosnia and Herzegovina.on December 10, 2019 (AA)

Austrian Author Peter Handke was awarded the Nobel Prize for Literature on Monday despite his record of denying the Bosnian Genocide during the 1992-1995 Bosnian War and his outspoken personal support for former Serbian president Slobodan Milosevic. A move which led to a swift diplomatic response and strong condemnation by journalists and human rights activists. Despite strong reactions from all over the world calling for the award to be revoked, Handke received his prize on the International Human Rights Day.

In response, Albania, Bosnia and Herzegovina, Croatia, Kosovo, Northern Macedonia and Turkey all announced that their diplomats would boycott the Nobel Prize ceremony in Stockholm.

Deputy Prime Minister and Minister of Foreign Affairs of the Republic of Kosovo Behgjet Pacolli blasted the award decision saying: “Today is a shameful day for Europe and humankind the awarding of Nobel Prize to Handke. It shows that Europe has amnesia of what happened to us in Kosovo, Bosnia and Croatia. We have to counter these revisionist attempts. Grateful to all who spoke loudly against this act.”

Albania’s Acting Foreign Minister Gent Cakaj criticized the decision saying: “Justification of war atrocities during the Yugoslavia break-up must not be rewarded.” he wrote on his Twitter account.

While Turkey’s President Recep Tayyip Erdoğan also slammed The Swedish Academy’s decision. During an event held on the occasion of Human Rights Day in the capital Ankara, he announced that Turkey also would not participate in the Nobel ceremony. Saying: “Awarding the Nobel Prize in Literature to a racist individual will not mean anything other than awarding human rights violations,” He also added that this action tarnished the reputation of the award saying: “Nobel extinguished itself. Nobel ended up itself. Now Nobel has turned into a position that acting politically and ideologically. For me, Nobel has no significance. And we won’t attend this ceremony certainly. Furthermore, we ask some friend countries to not attend this programme” he said.

The Swedish Academy awarded the Prize to Peter Handke “for an influential work that with linguistic ingenuity has explored the periphery and the specificity of human experience.” On the Academy’s website he was also described as “one of the most influential writers in Europe after the Second World War”. The Academy has hesitated to discuss Handke’s views on the Bosnian Genocide and his connection to Slobodan Milosevic just as much as Handke’s himself avoided talking about the criticisms during his speech at the Academy.

Handke also wrote about how the Serbs were misunderstood and were unfairly judged for the bloodshed that occurred during the breakup of the Former Yugoslavia in the 1990s. In one of his books ‘A Journey to the Rivers: Justice for Serbia’ published 1996, Handke attempts to vindicate Serbia claiming that the media covered the war from a Bosnian perspective. In a review of Handke’s book by David Rieff of The Los Angeles Times, Rieff argued that Handke largely based his book on personal opinions rather than any factual analysis saying: “There is virtually no reporting and only the crudest sort of historical analysis… More astonishing, Handke, so full of opinions about the real nature of the Bosnian conflict about which, he states over and over again, he and not the various reporters who actually covered the war has the truest sense, declined to set foot in Bosnia itself”.

The award of the prize to Handke also provoked the ire of many journalists, particularly those who personally reported on the Bosnian War. Cristiane Amanpour of CNN criticized Handke’s award on Twitter saying: “I was there. We all know who’s guilty”.

The Times Reporter Anthony Loyd tweeted: “Her dress torn, mute with shock, a Bosnian woman is found by the roadside after weeks in a Bosnian Serb detention camp, June 1993. Those of us there know and remember the war’s realities”.

While Santiago Lyon of the Associated Press tweeted: “Shame on Nobel Prize and shame on Handke for his blindness and willful denial of genocide in Bosnia. I was there as a photojournalist and saw it firsthand”.

Another journalist Peter Maass of The Intercept heavily criticised the rewarding of Handke. Maass claimed that some of Academy’s jurors were inspired by books which the claimed the Bosnian Genocide was the creation of a PR company that worked for the US, thus falling for a conspiracy theory about the Bosnia war. Maass says: “Here’s what shocks me most about this Nobel Prize disaster. It’s not that the Nobel jurors fell for conspiracy theories. That’s terrible enough, of course. The worst is that the elevation of Peter Handke has also raised from the nearly dead a discredited rewrite of history and genocide. We are going back in time”.

Maass gave a scathing rebuke to the Academy after the award ceremony saying: “At that moment, the Swedish royal family and the Swedish Academy will have officially and fully endorsed the work of a genocide denier”.

This was an opinion that was also shared by Swedish journalist Christina Doctare, who returned her 1988 Nobel Peace Prize in protest of the Handke decision.

After the Swedish Academy’s controversial decision, two issues come to mind. Firstly, has this irrevocably tarnished the credibility of the Nobel Prize? Secondly, at a time in which far-right populism is rising, is the Academy complicit in the mainstreaming extremist views? While the Swedish Academy may believe its decision to award Peter Handke was a purely artistic one, in reality the award signalled a worrying endorsement of hate.