Bulent Ortacgil: "Whether we support the ruling party or the opposition, we need to reconcile"

Turkey's famous musician Bulent Ortacgil spoke about how he sees “Turkey as a role model for other Muslim countries.” 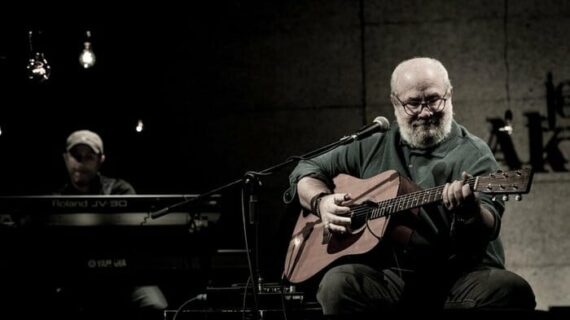 Making art with a sense of empathy is vital for Bulent Ortacgil, a famous Turkish musician, who says that he has never been a man of single ideology, a single truth. Thanks to this very character, Ortacgil believes his music is pleasing to different people from various ideological backgrounds. He says that he often looks at his compositions from alternate points of view and says that this is the crucial point: not being the representative of a single ideology.

Ortacgil, in his interview for Sabah, emphasized the uniting power of music and he recounts how his concerts in Germany drew as many Germans as Turks and was conducive to breaking the stereotypes on Turkish expatriates.

The musician finds the present state of the Middle East very upsetting and stresses that “the Middle East has become the liberty hall of all major powers: which is why Turkey was compelled to intervene and to adopt a more distinct attitude compared to its conventional foreign policy.”

Unlike neighboring countries, Ortacgil highlights that Turkey has a history of democracy and a culture of being a nation state, placing it at a distinguished position amid the realities of the Arab world which renders it the perfect role model for other Muslim countries.

Recalling the terrifying 15 July coup attempt, Ortacgil affirms that he has always been against all forms of coups throughout his life and that many lives were lost to thwart the recent coup attempt. He declares that there can be no form of “good” coups.

Renown for strong opposition to stereotyping and discriminatory categorization of people, Ortacgil notes that for a long time, Turkey’s social segments have contended against each other. He maintains that “we need to break this and we need to reconcile. We need to reconcile whether we support the ruling party or the opposition. We need to respect the results that come out of the ballot box. When we look at the realities vote-wise, are you going to ignore 52% of the society? or the opposing 48%? The president was chosen with 52%. The opposition needs to accept this. If the ruling party takes into consideration the needs and demands of the opposition, this issue might be solved.”

Ortacgil retrospectively evaluates the progress recorded in the depolarization of Turkey during recent years and adds “In the realities of former Turkey, the 48% would dismiss the 52%. This was a mistake. Those that earn 52% won’t fall for this mistake and if we act without ignoring the 48%, we can overcome our differences and solve our issues, for which I reiterate the importance of dialogue in politics.”