“Butcher of Bosnia” jailed for life

Ratko Mladic, 74, has been convicted by a U.N. tribunal in The Hague on charges of genocide and crimes against humanity for massacres of Bosnian Muslims and ethnic cleansing campaigns to forge a “Greater Serbia.” He was jailed for life on Wednesday. 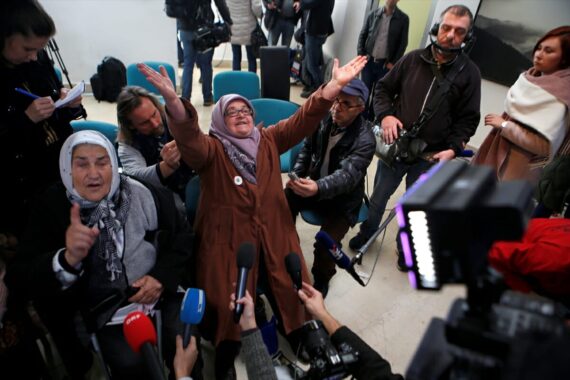 Relatives of Srebrenica victims of crimes, committed during the 1992-1995 Bosnian War, celebrate as they are in the final verdict on former Bosnian military chief Ratko Mladic known as 'Butcher of Bosnia' who appears for the pronouncement of the Trial Judgement for the International Criminal Tribunal for the former Yugoslavia (ICTY), at the Srebrenica Genocide Memorial in Srebrenica, Bosnia and Herzegovina on November 22, 2017.

The UN Criminal Tribunal for the Former Yugoslavia (ICTY) found Ratko Mladic guilty of 10 of 11 charges, including the slaughter of 8,000 Muslim men and boys at Srebrenica and the 43-month siege of the Bosnian capital Sarajevo during the Bosnian War in 1992-1995.

Called the “Butcher of Bosnia” by survivors of his actions Mladic was responsible for the death of more than 10,000 civilians by shelling, mortar and sniper fire in Sarajevo.

The killings in Srebrenica of men and boys after they were separated from women and taken away in buses or marched off to be shot amounted to Europe’s worst atrocity since World War II.

“The crimes committed rank among the most heinous known to humankind, and include genocide and extermination as a crime against humanity,” Presiding Judge Alphons Orie said in reading out a summary of the judgment.

According to the tribunal, Mladic “significantly contributed” to genocide committed in Srebrenica with the goal of destroying its Muslim population, “personally directed” the bombardment of Sarajevo and was part of a “joint criminal enterprise” aimed at purging Bosnian Muslims and Catholic Croats from Bosnia.

Remarks on the conviction worldwide

There has been support for Mladic’s conviction internationally.

“Two of the main architects of some of the worst atrocities in Bosnia and Herzegovina, including the genocide of Bosnian Muslims in Srebrenica, Ratko Mladic and Radovan Karadzic, have now been convicted and are facing lengthy jail sentences,” UN High Commissioner for Human Rights Zeid Ra’ad al-Hussein said in a statement.

NATO Secretary-General Jens Stoltenberg also welcomed the UN court’s decision and said he hoped the ruling would pave the way for peace and reconciliation in the region.

Serbian President Aleksandar Vucic claimed the outcome of the trial has not been a surprise and called on his people to look forward in peace.

“I urge the citizens of Serbia to start looking into the future, to think that we will preserve the peace and stability of the region, that we do not get stuck in the tears of the past, but based on workers’ sweat we create a better future for all of us,” he said.

Some have criticized the court’s decision as well; the Serb member of the Presidency of Bosnia and Herzegovina, Mladen Ivanic, said the court had not shared justice among Serbs, Croats and Bosniaks.

“The Hague Tribunal has brought distrust instead of trust, and instead of reconciliation, it will lead to new political conflicts” he said.

“The verdict of Gen. Mladic shows that they continue with a negative attitude towards the Serbs and that the Hague Tribunal will remain remembered for not sharing justice but politics.”

The decision was generally welcomed but for many Mladic’s crimes are too extensive that no sentence could possibly atone for the thousands killed and injured.

Hatidza Mehmedovic, president of the Mothers of Srebrenica Association said: “We must accept the facts and build a better future. The genocide in Bosnia and Herzegovina should no longer be denied.”

She also described Wednesday’s decision as “a drop in the ocean.”

Fikret Grabovica, president of an association of parents whose children were killed during the siege of Sarajevo, said they had been granted “partial justice.”

“There is no penalty for what Mladic has done and what he is responsible for. It was important that he got life imprisonment. We are partly satisfied with the decision, if not completely,” said Grabovica.