Cambodia to support Turkey against FETO

During a joint press conference with Cambodian Deputy Prime Minister and Foreign Minister Prak Sokhonn, Turkish FM Mevlut Cavusoglu stated, "We have repeated our extradition request on the issue of high profile FETO members in Cambodia." 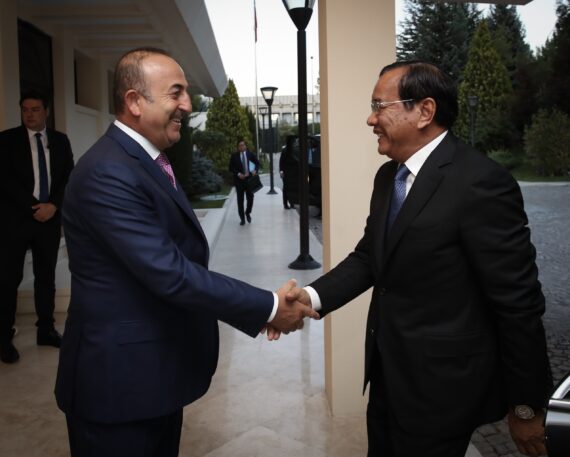 Since the failed coup attempt on July 15, 2016, the AK Party government has been trying to emphasize the fact that the Fetullah Terrorist Organization (FETO) is not only a threat to the national security of Turkey, but is also a threat to other countries that it operates in.

Although the group, led by U.S.-based criminal cult leader Fetullah Gulen, tries to present itself as a “civil society” in countries that it operates, by ensuring its activities are conducted through businesses and -mainly- through the education system of countries in concern, after its attempt to topple the democratically elected government in Turkey on July 15, the group has been accepted by an official terrorist organization not only by the state but also by the Turkish public – regardless of ideological or religious affiliation.

In it’s attempt to ensure that justice is served, Turkey’s most recent calls to extradite FETO members has been in Germany and in Cambodia. With President Erdogan’s official visit to Germany last week, the President called for the German government to realize that this group, which is very active in Germany, will eventually become a threat that the German authorities will have to deal with nationally.

However, more recently, during a joint press conference with Cambodian Deputy Prime Minister and Foreign Minister Prak Sokhonn, Turkish FM Mevlut Cavusoglu stated, “We have repeated our extradition request on the issue of high profile FETO members in Cambodia.”

“This terror group is a threat not only for Turkey, but every country it operates in.”

Sokhonn mentioned that Cambodia is “in close cooperation with Turkey” in regards to the fight against FETO.

“As a friend of Turkey, Cambodia will continue to support Turkey in its operations against FETO,” the FM said.

Also Read
The Gulen question and Flynn’s cooperation with Mueller