Can CHP and HDP Form an Alliance in Turkey's 2019 Local Elections?

Even though the CHP’s strategy in local elections is not clear yet, taking into consideration discussions made, it is possible to see a latent alliance among the CHP and other opposition parties. 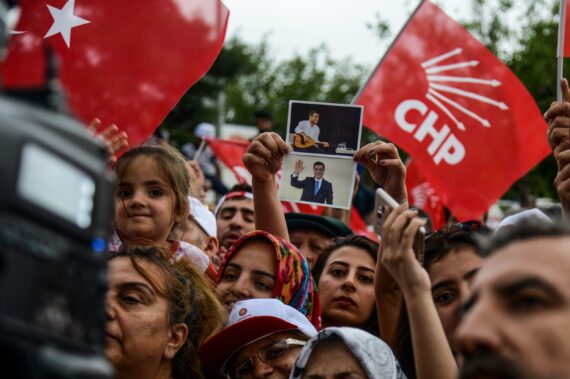 People hold pictures of Selahattin Demirtas during a CHP rally in Diyarbakir on June 11, 2018. Getty Images

As occurred just before the June 24 elections, the party once again conducted a research on possible outcomes of forming alliances in local elections. Even if the results of this research were not shared with the public, it becomes an obligation for the party to keep its current position in the local administration as reflected on the press. Due to this reason, there are several scenarios on the table for the CHP’s local election strategy.

Nowadays, the main scenario focuses on the outcomes of a possible alliance between the CHP and the HDP during local elections. A similar scenario was also present during the June 24 election period. Due to the fact that the CHP found this alliance ineffective in comparison to the alliance with the Iyi Party (IP) and the Saadet Party (SP), party circles convinced the leaders to choose the second option. Although there was not an official alliance between the CHP and HDP during the June 24 elections, the CHP maintained its latent support for the HDP’s electoral campaign. This was to such an extent that some CHP circles voted for the HDP in the parliamentary elections. Post-election surveys indicate that the HDP passed the threshold with the votes it obtained from CHP supporters.

Due to these reasons, another latent alliance between the CHP and HDP is the most powerful scenario on the agenda. As reflected in the media, the party sees this alliance as beneficial – especially in metropolitan cities. Istanbul, of course, becomes the main target of the CHP in local elections and the party designs its electoral campaign by focusing on this city. The results of the 2014 local elections reflect the fact that it is not possible for the CHP to “win” Istanbul by only forming an alliance with the HDP. Thus, the party is trying to broaden the boundaries of this alliance by involving other parties and political circles.

At this point, the possibility of forming an alliance with IP (Iyi Party) is also on the agenda. However, because the official alliance between the CHP and IP was broken soon after the June 24 elections, it is difficult for these two parties to re-form an alliance. More, rising nationalistic tendencies within the IP makes it impossible for the party to get together with the HDP. Finally, IP officials blamed the CHP for failure in the parliamentary elections, and therefore, it will not be easy to convince these individuals to forming another alliance with the HDP.

Even though the official alliance between CHP and IP was broken soon after the elections, the close relation between CHP and HDP continues. The similarity in discourse among these two parties increases the possibility of an alliance to occur during local elections. It is almost certain to see a latent alliance in Istanbul and Ankara, and it will not be a surprise to see an alliance in other electoral districts. However, seeing as the votes of this alliance will not be enough for the CHP to gain Istanbul, the party will try to find a new way to convince Meral Aksener’s IP.

Also Read
How Do We Remember Adnan Menderes in Contemporary Turkish Politics?