Germany already had established together with Brazil, Japan and India the so-called G4 group in order to support the mutual claim of a UNSC-membership if a so-called reform will be launched one day. 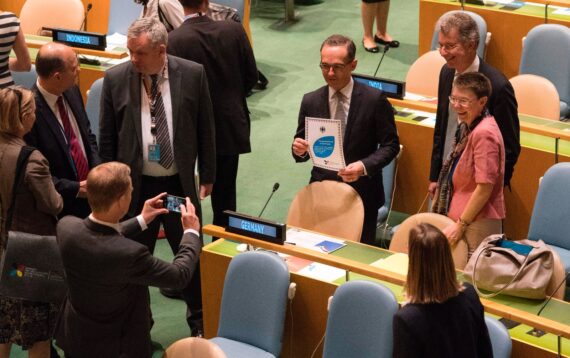 German Foreign Minister Heiko Maas (C) and the delegation from Germany arrive for a General Assembly meeting to elect the five non-permanent members of the Security Council June 8 at the United Nations in New York. Getty Images

In early 2018, Germany’s current coalition government and particularly its foreign minister Heiko Maas (SPD) devotedly and ambitiously promoted Germany’s candidacy for a non-permanent seat on the United Nations Security Council (UNSC) for the 2019-2020 term – and ultimately, he achieved success. During those days, Germany had to face harsh criticism above all from Israeli circles due to Israel’s similar goal to become a non-permanent member of the UNSC. In contrast to Germany, which previously had a two-year membership of the UNSC six times, Israel had never become a member of the most effective body of the United Nations. Therefore, even some German voices problematized Germany’s continuing ambitions due to disregarding Israel’s similar objective.

In the past, West-Germany had become a member two times and East-Germany one time a non-permanent member of the UNSC. Subsequent to 1990 the now united Federal Republic of Germany had become a UNSC-member three times as well. That is to say, six times at a total. And recently in June 2018, 184 of 193 UN member states voted for Germany’s seventh non-permanent membership at the UNSC. The German diplomacy tradition generally follows a trend of becoming a UNSC member in an approximately 8 years rhythm, as it has previously been the case in the 2011-2012 term. Actually, becoming a non-permanent member for the sixth time can be counted as an actual diplomatic success while keeping in mind that both German countries had become members of the UN in 1973 – the UN had been established in 1945.

With the beginning of the new year, Germany is thus a two-year lasting non-permanent member of the UNSC, which does mean that Germany will be a member of the council consisting of five permanent member states, such as the U.S., France, U.K., China and Russia and all other ten non-permanent member states. The first group represents the so-called privileged ones which are also in the possess of legal nuclear weapons of mass destruction – a quasi post-WWII mechanism in order to guarantee a balanced “world peace.”

In order to become a permanent UNSC member, Germany has established the so-called G4 group with Brazil, Japan, and India, in order to support a mutual claim of membership if reform will be launched one day.

However, it is no secret that Germany –independent of the Christian Democrat-led or Social Democrat-led coalition governments– is continuously aiming to become a permanent member of the UNSC in the future. In this sense, Germany already had established together with Brazil, Japan and India the so-called G4 group in order to support the mutual claim of a UNSC-membership if a so-called reform will be launched one day. Germany argues that the conditions of 1945, which established the UNSC, do not reflect the geopolitical realities of the 21st century. Therefore, the status quo has to be changed, according to Germany, but for this step to occur, a 2/3 majority of the UN General Assembly has to ratify such a reform. Expecting, in particular, the five permanent members to agree to such “privilege limiting” is rather unrealistic – at least in the near future.

Starting as a new non-permanent UNSC member, the German Foreign Ministry and its minister Maas made some statements with regard to Germany’s purposes in the upcoming two years. It’s particularly interesting that foreign minister Maas stated on 1 January, 2019, that Germany will focus on tasks in order to prevent worldwide crises. But Maas’ main emphasis was on the adherence to the multilateral world order. By this, he once again clearly stressed his country’s position by rejecting indirectly President Trump’s ‘America first’ stances and pointing out to a “time period, when we need more international order, more reliability, more confidence in our common rules. The United Nations is as strong, fair and effective as its members are”. Furthermore, Maas’ ambitions of addressing the nuclear disarmament and arms control issue might also be issues of great importance during the two years.

As a new non-permanent member to the UNSC, German Foreign Minister Maas emphasized adherence to the multilateral world order and positioned the country in direct opposition to President Trump’s ‘America first’ rhetoric.

With regard to Germany’s main ambitions in the next two years it’s striking that there are – besides some general and traditional “German commitments and priorities”– a few new and different goals. The four key goals on which Germany wants to focus are named as “peace,” “justice,” “innovation,” and “partnership.” Besides these topics, it seems obvious that the Federal Government will push to “take on a wide spectrum of duties such as disarmament, crisis transformation, crisis prevention, human rights, as well as climate, security and health policy, to give but a few of the most important examples.”

One also notices that there is a certain kind of emphasis in Germany’s ambitions. Namely, the reference to Germany’s importance as the fourth largest financial contributor of the UN. In the last couple of months, German politicians increasingly tended to stress Germany’s financial contributions to the UN, according to which the Federal Republic contributed with 6,4 percent to the 2018/2019 UN budget, which amounts to a total of 5.4 billion US dollars (U.S. 22 percent, Japan 9,7 percent, China 7,9 percent). In this sense and as an –unexpressed– quasi legitimizing analogy, Germany also addresses the need for UNSC reform “in order to give this key body in preserving world peace additional legitimacy and authority” because“today’s multipolar world and the main contributors to the United Nations no longer sufficiently reflected by the permanent members of the United Nations Security Council (USA, Russia, China, United Kingdom and France), as was the case when the United Nations was founded in 1945.”

Germany wishes to take more responsibility in a complicated global political environment. However, whether Germans as well as German media and opposition parties will follow such a global ambition, is an open and disputable question.

Germany will try to pave the way for more fields of political action for the country while particularly referring to its high financial contributions and economic power above all in the EU context. In this sense, the desire or will to take more responsibility in a complicated current global context will entail more difficult expectations. However, whether Germans as well as German media and opposition parties, that are increasing their votes in the last days, will follow these global ambitions, is an open and disputable question. The upcoming two years will clarify today’s uncertainties but from a rather realist point of view, much more than today’s actual conditions will most likely not occur during a so-called “junior partner” presence within the core of the UNSC, the circle of the permanent members, i.e., a so-called club of privileged countries. Finally, Germany might also try to find cooperation opportunities with Turkey, which has also been supporting the idea of a needed reform of the UNSC for a long time.