Can the Manbij Roadmap Rebuild Mutual Trust Between the US and Turkey?

By partnering with the YPG on the ground, the U.S. lends credibility and legitimacy to YPG forces that goes beyond narrow assistance. It also empowers the YPG against other local groups, including those that are not aligned with the PKK. In the end, giving up armed struggle against Turkey becomes less attractive and unnecessary for the PKK and its allied groups. 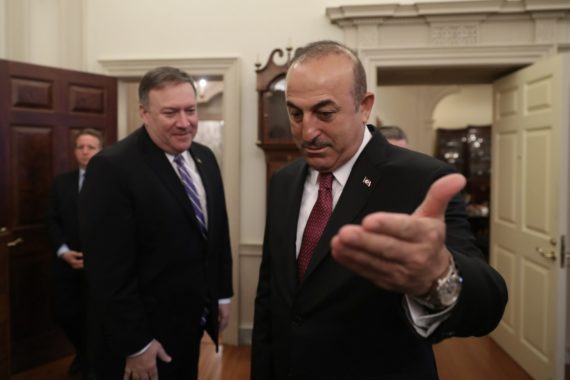 The Syrian Civil War and its consequences have posed the most difficult strategic challenges to the U.S.-Turkey relationship in recent years. Issues such as the status of the Assad regime, the composition of the opposition, and the U.S. relationship with the YPG have strained bilateral relations. Most of the differences were manageable, as they had an indirect bearing on the security of the U.S. and Turkey. However, the YPG challenge has been of a different nature given that it is the PKK’s Syrian branch and the PKK continues to pose a threat to Turkey’s security.

Over the past couple of months, the two NATO allies finalized an agreement to take concrete steps toward addressing this challenge. While the “roadmap” agreement promises to deliver a serious reassurance to Turkey’s security requirements, its implementation will be key in determining whether it can succeed and lead to future cooperation. If successful, the plan could go a long way toward helping to rebuild the long-damaged mutual trust between the U.S. and Turkey.

The Manbij roadmap announced on Monday foresees the departure of the YPG forces from Manbij and the administering of the city by its local population over the next few months. The U.S. and Turkish security forces are supposed to cooperate on the ground to bring about a sustainable local governance model that is not dominated by the YPG. Both the Euphrates Shield and Afrin military operations have provided Turkey with a lot of experience in building functioning governance structures that are reflective of the ethnic realities of the various localities.

Turkey has long opposed what it calls “demographic engineering” and will continue to do so in the future. This will result in the governance of Manbij by local Arabs who were previously pushed out by the YPG. Once, and if, successful, Turkey will most likely push to implement this model east of the Euphrates as well, in order to reduce the dominance of PKK-aligned groups. This is critical not only for Turkey’s own security, but also for a durable and sustainable stabilization operation on the ground in Syria.

If the best case scenario is realized as described above, Turkey’s immediate security concerns can be addressed and mutual trust can be rebuilt. It would certainly not solve all the challenges in the U.S.-Turkey relationship, but it would potentially remove one of the most pressing strategic disagreements between the two countries. However, U.S. support for the YPG would continue to be a sore point. U.S. officials and analysts underline the “limited” and “temporary” nature of this support, but for Turkey it certainly means much more. By partnering with the YPG on the ground, the U.S. lends credibility and legitimacy to YPG forces that goes beyond narrow assistance. It also empowers the YPG against other local groups, including those that are not aligned with the PKK. In the end, giving up armed struggle against Turkey becomes less attractive and unnecessary for the PKK and its allied groups.

This dynamic would continue to strain the bilateral relationship, although Turkey’s Afrin operation that put an end to the YPG march toward the Mediterranean and the prospect that the YPG may no longer be in Manbij will help address some of Turkey’s immediate security concerns. The current U.S. willingness to work with Turkey is a good sign. Nevertheless, it will need to be coupled with concrete action on the ground.

If Manbij can serve as an example of a successful stabilization effort and a sustainable and representative governance structure, the U.S.-Turkey strategic conversation would improve and could be broadened to include areas east of the Euphrates river. This kind of cooperation has been lacking between the two countries and is critically important if robust stability is to be achieved. The U.S. will need state allies like Turkey, especially if it intends to pull out of Syria, or at least further reduce its footprint. Investing in a sub-state actor will not help bring stability to northern Syria in the long run. In that sense, a successful implementation of the newly announced Manbij roadmap can help start a meaningful strategic dialogue between the two allies.