Can the Mesut Ozil Affair Trigger a New Sensitivity Regarding Racism?

Perhaps Ozil’s recent stance may achieve or possibly trigger more than what previous victims of known racist treatments have not had the chance to. 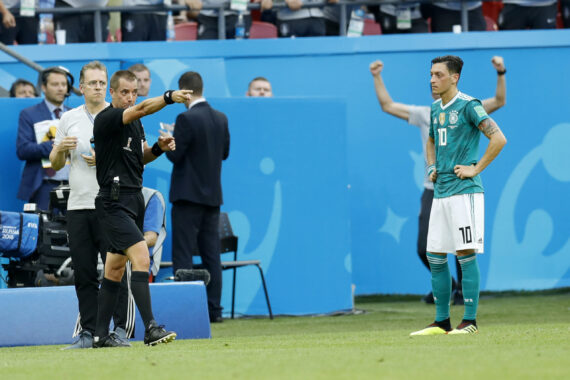 Last Sunday, one of Germany’s best football players quit his career in the German national football team. At the beginning of the so-called Ozil Affair, Mesut Ozil, a successful German football player of Turkish descent, has been heavily criticized by the head of the German football federation (DFB), Reinhard Grindel and by major German media outlets for having a photo taken with Turkey’s President in London. Subsequent to these comments since May, the affair escalated when racists went as far as to attack Ozil by casting doubt on his Germanness. Following the German team’s World Cup disaster, Ozil has also been blamed for Germany’s fiasco by most German media outlets, by the German national team’s manager and by the head of the German football federation, Grindel. Under these circumstances, the already existing negative attitude towards Ozil took a toll on various platforms, which I also addressed in this column in the recent weeks. Furthermore, the situation also took on a racist atmosphere, which became increasingly prevalent in mainstream circles.

Finally, Ozil announced on Sunday his retirement from international football by posting a series of statements via his Twitter account. For this, he preferred the English language – also a message to racist circles who reject the global attributes carried by football players dual heritage such as Ozil. With his statements, Ozil particularly criticized the German football federation’s president, racist fans, and media outlets by pointing out their racist treatment and double standards towards people with Turkish roots. Without repeating his statements in its entirety (see I-III parts of his statement) on this column, it is important to stress his most striking words. For instance, Ozil mentioned that he will “no longer be playing for Germany at the international level whilst I have this feeling of racism and disrespect.” He also added: “Racism should never, ever be accepted.” In addition, Ozil made a direct reference to Reinhard Grindel, who is the president of the DFB, by stating “People with racially discriminative backgrounds should not be allowed to work in the largest football federation in the world that has players from dual‑heritage families. Attitudes like theirs simply do not reflect the players they supposedly represent. In the eyes of Grindel and his supporters, I am German when we win but I am an immigrant when we lose.”

Ozil also emphasized that he used to wear the German shirt with pride and excitement, but now he does not: “I feel unwanted and think that what I have achieved since my international debut in 2009 has been forgotten.”

What do these statements and Ozil’s decision in general mean; and where will the Ozil affair bring Germany, its people, its media and its politics?

First of all, the escalation of the situation revealed an already known issue which is the failure of Germany’s integration policies. Despite mainstream politicians and the German media dismissing and disregarding this fact, it’s obvious that in particular, Muslims and Turks in Germany have faced difficulties in being accepted by the majority of society – despite considerable efforts by people with Turkish or Muslim roots. The recent Ozil affair once again resurfaced this issue. Statements about the still existing double standards and disrespect amongst the political and media elites in Germany seems to be a serious and persisting problem which is, alarmingly, not taken seriously into consideration by people who should actually solve the problem. If even a very successful personality like Ozil faces such problems, many people are wondering if the reverberations for less advantageous or even disadvantageous people with a migration history. Mesut Ozil will definitely not be the last one facing a systematic discrimination due to his roots, religion, and preferences.

Moreover, the roots of the current mood can be traced back to Germany’s political transformation in the recent years. On the one hand, the increase of far-right parties made it possible that extreme right-wing and racist discourses became increasingly normal in societal discourse. Racist circles and parties have instrumentalized the refugee crisis since 2015 in order to legitimize their racist and discriminatory discourses. Additionally, center and conservative parties are prevalently also applying this kind of extreme-right discourse to prevent loss of votes to extremist parties. However, to no avail. German voters consequently prefer the original racist parties instead of being manipulated by mainstream parties. Another issue is the treatment of the Turkish Republic and its government over the last couple of years. The collective demonizing and irrational attitude towards Turkey by both German media outlets and politicians reinforced the aggressive behavior society’s prevailing anti-Turkish/Turkey mood.

Thus, the Ozil affair and Ozil’s recent statements caused a sensitivity within the entire German society. People in Germany with a Muslim or Turkish background, who are still discriminated against despite their respective professional successes, are facing similar reactions in their daily lives. By quitting the national team, Ozil pointed out the persisting discrimination and institutional racism problem in Germany. He stood strong and neither apologized nor changed his position. It cannot be denied that many ethnic Germans have been shocked by Ozil’s declaration, or perhaps more accurately a manifesto, which caused a tremendous wave of support from most citizens with migration roots in Germany. Sincere people will probably take these problems into consideration and try to solve these chronic obstacles without continuing to accuse and blame Ozil. Nevertheless, it’s also interesting to see that the German community did not pay attention nor the much-needed sensitivity with regards to the recently concluded NSU trials – whose results were a disappointment. Perhaps Ozil’s recent stance may achieve or possibly trigger more than what previous victims of known racist treatments have not had the chance to.