Can the Muslim Brotherhood in Algeria Be a Transformative Power?

The Muslim Brotherhood's decision to nominate a candidate in the presidential election for the first time indicates that the movement aims to become a political force for a change in the country. 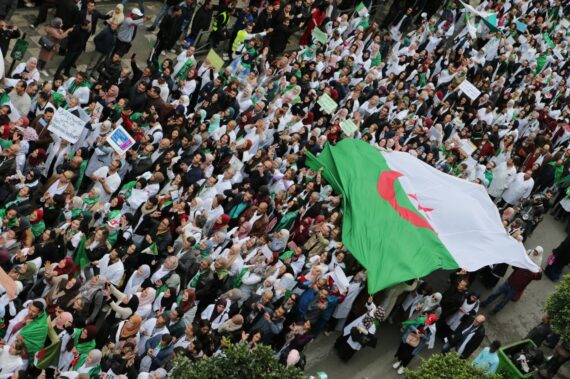 The ongoing protests in Algeria are regarded as reminders of the early days of the Arab revolutions in 2011, when millions poured to the streets in many countries across the Middle East. The protests had caused regime changes in countries like Egypt, Libya, and Tunisia. One of the most important organized movements during the revolutionary uprisings was the Muslim Brotherhood. The movement was actively engaged in political transformation in both Egypt and Tunisia. Despite the fact that the movement has been going through a bitter experience in Egypt since 2013, it is trying to be part of the political struggle in Algeria.

Although it has not been deeply engaged in the country’s political life for many years, the Muslim Brotherhood has a long history in Algeria. Sheikh Ahmed Sahnoun was one of the intellectuals of the period that founded the movement in 1953. Despite the fact that the movement did not have a significant presence in the country’s independence war against France, Muslim Brotherhood members made efforts to motivate the Algerian people during this period.

Will the Muslim Brotherhood ever have the chance to lead Algeria to becoming a full-fledged democracy?

Following independence, the movement kept a low profile in the country’s volatile political environment. During the 1980s, as tension between Islamist groups and the government increased, the Muslim Brotherhood did not have a sharp stance (unlike other conservative Islamic movements). Some groups called for an Islamic state at the time, but the Muslim Brotherhood leadership did not. Tensions between the regime and Islamic groups increased especially in the late 80s. During the 1990 election, the Islamic coalition, which included a minor Muslim Brotherhood group, Nahda, gained 70% of the total votes. This was a turning point in the country’s history as the army cancelled the elections. The following period was a catastrophe for Algeria, as the country was dragged into a decade-long civil war.

During the civil war, the Muslim Brotherhood in Algeria did not position itself against the army. In contrast, it followed a political pragmatist approach by siding with state institutions. The leading organization of the Muslim Brotherhood, the Movement of Society for Peace (MSP) was established during these years. In return to its loyalty to the state, in 1995, the MSP was given political ranks by the Algerian state. In 1997, both Nahda and MSP ran for parliamentary elections and won a total of 15% of the vote, with 69 seats in the parliament. Following the election, together with two secular political parties, the MSP became a member of the political coalition that governed the country for about two decades. As a coalition member, the MSP was given 7 ministerial positions and in 2004, the group supported the continuation of the Abdel Aziz Bouteflika presidency for another term.

Despite years-long pragmatist alliances with secular ruling elites and the army, the Muslim Brotherhood took a different political stance in the post-Arab revolutions period. The organization believed that the wave of uprisings in the region must pressure the Algerian regime for democratic reforms. Due to its increasing disagreements with the establishment in Algeria, MSP announced its withdrawal from the coalition in 2012. It can be argued that one of the most important factors in this decision was the early success of the Muslim Brotherhood in Egypt and Tunisia. With a new discourse and activism, the movement also wanted to frame itself as a moderate organization that can play a leading role in the country’s democratization process.

In the post-Arab revolutions period, MSP became more aggressive in terms of its political discourse. In 2012, the then leader of the movement, Bouguerra Soltani, stated that the revolutionary wave would eventually arrive to Algeria if the political leadership cannot complete political reforms demanded by the people. The movement also harshly criticized Israeli policies towards Palestine and commented against the regional policy choices of Saudi Arabia and the United Arab Emirates.

The political stance adopted by the Muslim Brotherhood throughout the ongoing political protests against President Bouteflika in Algeria illustrate that the organization will no longer keep a low profile in the country’s political arena.

Finally, MSP also actively supported anti-government protests that started in February 2019, when Abdel Aziz Bouteflika announced his candidacy for a fifth term in office. The MSP leadership called on President Bouteflika to resign immediately. The leader of the movement, Abdul Rezzaq Al-Makri, stated that the ruling elite should take into account the demands of the people and stressed that the tension in the country would increase and that political instability would deepen.

These statements and the aggressive stance adopted by the movement illustrates that the Muslim Brotherhood in Algeria will no longer keep a low profile in the country’s political arena. It can be argued that the organization wants to play a more important role in the future of Algerian politics. The movement’s decision to nominate a candidate in the presidential election for the first time indicates that the Muslim Brotherhood aims to become a political force for a change in the country.

Despite Bouteflika’s announcement of postponing elections, protests have been continuing throughout the country. People have demanded the resignation of the president and have called for new free and fair elections to take place. Both the continuation of protests and the determination of protesters highlights that the country’s political realm will be a scene of historical developments in the coming period. As one of the most organized social and political forces, the Muslim Brotherhood is likely to play an important role in this political transformation.