The PKK is often represented as an environmentalist, feminist, and at times, charitable organization in mainstream Western media, while its terror methods are hidden from the picture. 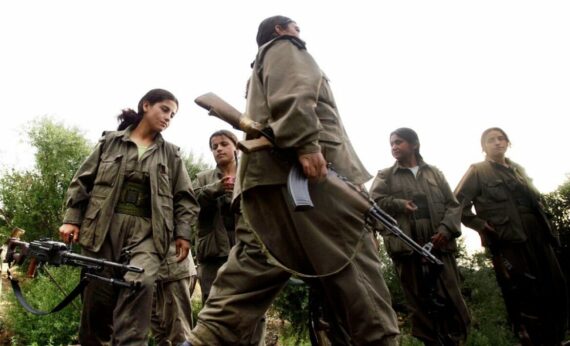 Rod Nordland of the New York Times recently wrote a piece on the PKK for the daily paper, where he argued that the PKK has “long made women’s rights a centerpiece of its political platform.” Nordland is no exception in the mainstream American and European media outlets. The PKK is often represented as an environmentalist, feminist, and at times, charitable organization in mainstream Western media, while its terror methods are hidden from the picture. Of course there are more objective assessments of the PKK in Western circles but they are in the minority. What remains in mind after reading a few columns on the PKK is not the blown up bodies after a PKK suicide attack but a liberated female guerrilla with a big smile on her face and a flower in the hair.

EnergyBy Büşra Zeynep Özdemir DAŞCIOĞLU
As the PKK declared the end of the 29 month long ceasefire in the Summer of 2015 and murdered two policemen in their sleep in their apartments on 22 July 2015, Turkey started its counterterrorism operations as a response (by the way, multiple news sources in Western media also tends to tell the story in the reverse order by starting it with the Turkish police and military operations against the PKK and then mentioning of the PKK violence as if it was a reaction to the operations). It is no secret that Turkey is in the midst of a tough counterterrorism policy after almost two years of efforts to find a political resolution to the problem. Yet, representing Turkey’s tough counterterrorism policies as targeting women’s rights in Turkey and stressing the PKK’s ostensive democratic struggle is far from the truth, no matter how often we hear it in Western media.Here, we follow the mainstream lead and omit the PKK’s definitive feature, terrorism. This is, of course, not a fair way to discuss the PKK, which, just in 2016 has murdered four AK Party politicians of Kurdish origin, threatened millions of Kurdish AK Party voters with the same end, killed over 150 Turkish citizens in 8 separate suicide bomb attacks, and killed hundreds of soldiers, police, and Kurdish village guards. The Kurdish origin of the murdered AK Party politicians and village guards must be stressed because the very same circles in the West are eager to depict the PKK terror as a war between Turks and Kurds. Putting all these biases aside, let us focus on the PKK and its democratic gender policies. Let’s see how the PKK liberates the Kurdish woman.

For the PKK, the Kurdish woman is oppressed under the patriarchic structure of Turkey’s Kurds living in rural areas of southeast Turkey, which is not an incorrect diagnosis. But the PKK’s problem with women’s liberation is not with its diagnosis but its treatment. The PKK promises Kurdish women freedom in its own ranks. So, it is not enough to seek equality but to do it in the PKK’s ranks. HDP MP Sabahat Tuncel summarized this point of view best in her speech a few years ago at a memorial event for Zeynep Kınacı, a PKK member who blew herself up in a suicide attack, killing 8 Turkish soldiers along with herself. In Tuncel’s words, “Comrade Zilan [the code name for Kınacı] is a significant name for the liberation movement. Comrade Zilan did not only detonate the bomb on her body against the system, but also against the male-dominated system.” Or you can listen to the life story of another Zilan in the PKK’s propaganda movie Bakur (2015) where she tells how she liberated herself by joining the PKK at the age of 14. It seems like the PKK does not only liberate women by arming them, but also children. This is the kind of gender liberation that the PKK envisages.

What comes next after cheering for PKK’s liberation of Kurdish women is its so-called radical democracy. These lines of depictions connect the PKK’s liberation of women to its radical democracy project. Nevertheless, to the surprise of the international audience whose primary source of information is the New York Times or other leading Western mainstream media outlets, the PKK, like pretty much all other armed organizations, is not and cannot be a democratic organization.

The PKK defines itself as an organization that is based on the principles of “democracy, gender freedom, and ecological life” in its so-called “constitution contract” (KCK Sözleşmesi). Yet, in practice, it is as democratic as Kim Jong Un’s Democratic People’s Republic of Korea. The PKK in its practice and in its basic contract (KCK Sözleşmesi) is clearly a totalitarian organization. The disparity between the democratic principles of the contract and the organization’s practice does not require an evaluation. Here, we are talking about an organization relying on the tactic of terrorism that praises the right to live as “the most basic, inalienable right” while sending its suicide terrorists to blow themselves up among crowds in urban metropoles.

It is very unfortunate that we are living at a time when we have to debate with many Western colleagues that a terror organization like the PKK is not a civil society organization working to improve women’s rights or democracy.

Apart from the theory-practice dichotomy, the contract is a contradiction in itself. While repeatedly claiming to establish a radical democratic system throughout text, it also singles out the leadership/önderlik (the PKK’s founder Öcalan) with the right to “represent the entire society in every aspect.” The PKK simply replicates Kim Jong Un’s Democratic Korea in a non-state organization. The PKK’s radical democracy is a system of one man’s unquestionable authority. That is the reason why the organization has one male and one female co-leader for each position except for its top leadership.

It is very unfortunate that we are living at a time when we have to debate with many Western colleagues that a terror organization like the PKK is not a civil society organization working to improve women’s rights or democracy. It is like having an argument with somebody who takes the terror side of DAESH as an omissible detail and praises the organization just because they fix damaged roads and asphalt them and hence facilitate transportation in Raqqa. It is trivial to argue with a PKK sympathizer scholar, journalist or politician (that you run into easily in mainstream Western media, academia and parliaments) who think the PKK is a sweet organization that helps the cause of women. Yes, if you ignore the terror side of terror organizations, what is left is peaceful. PKK leader Öcalan’s celebrating of Women’s Day on every 8 March does not make his organization a civil society organization. The PKK is no FEMEN, it is a terror organization, and this is not an omissible detail but the part that needs to be focused on.

In a nutshell, in an average Western mainstream paper, this is how you read about the PKK: The PKK is an organization that works for women’s rights in Turkey (and they also happened to kill a few thousand Turkish citizens, send suicide bombers to metropoles, assassinated politicians, teachers, and imams both of Kurdish and Turkish origin, massacred Kurdish villagers who sided against them, and executed dissidents within the organization itself). Moreover, the PKK is a democratic organization (whose leader is declared to represent the entire society in every possible aspect and therefore his will is the people’s will and therefore he has the final decision-making authority). Not to forget, one of the culprits of the latest PKK attack in Dolmabahçe was claimed to be a woman, who liberated herself by detonating a bomb-laden car among crowds that killed dozens of people and injured more than a hundred.