Can the US have its Cake and Eat it too in Syria?

The U.S. balancing act between supporting the PYD and providing reassurances to Turkey to be able to cooperate on the resolution of the Syrian conflict is not an easy one. 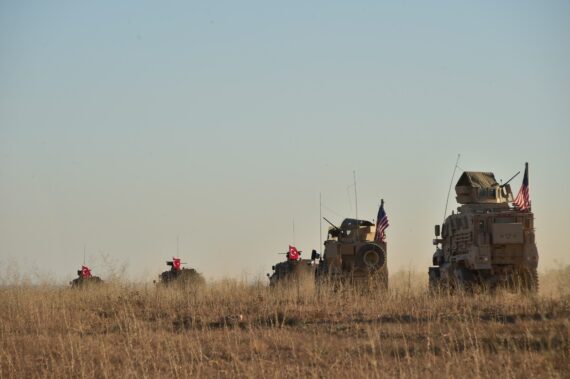 Armoured vehicles of Turkish and U.S. troops are seen as they begin their first round of joint patrols in the northern Syrian city of Manbij, as part of a deal to rid the area of the YPG/PKK terrorist group, on November 1, 2018 in Manbij, Syria. Anadolu Agency

The U.S. wants to cooperate with Turkey on all issues related to the Syrian conflict and sees it as critical to end the civil war. The U.S. Syria envoy James Jeffrey points to the Manbij agreement as a good model for broader cooperation. He is reassuring Turkey that the PYD and YPG members are leaving Manbij and that they will not participate in local councils and the police force, as Turkish policymakers have demanded. Progress, however, in Manbij has been slow and Turkey has yet to declare that the YPG members have left to go east of the Euphrates. It is also not clear in what areas specifically this model can be replicated. Some progress is obviously better than none and the U.S.’ willingness to work with Turkey is an encouraging sign, both for stability of northern Syria and also for the end of the broader conflict. Nevertheless, we need to keep in mind that Turkey continues to be concerned about and feel threatened by YPG control and presence east of the Euphrates as well.

The envoy’s remarks about “pulling the plug” on the Astana process was met with criticism both by Turkey and Russia, who believe they have been making progress contrary to outside views about the lack of tangible results. The failure to create a constitutional committee to draft a new constitution has suffered from the dynamics of the conflict at play since the beginning. The opposition remains fragmented and Assad’s supporters, Russia and Iran, remain invested in the continuation of the regime. Determining the composition of the committee has been extremely difficult not only because the guarantor states cannot agree on who will be participating in the constitution writing process but also because of the fundamental dynamics of the conflict.

The only other alternative is for the U.S. to fundamentally shake up the dynamics on the ground and create a different game where other actors may be lured to a framework that excludes Iran.

In other words, if the balance of power is not significantly changed between numerous sides on the ground, there will be no party that is able to impose its will. By refusing to empower the Arab opposition in concert with Turkey, the U.S. has contributed to this fragmentation. It is not a matter simply of diplomatic negotiations over picking the constitution writers but it is also about creating a committee that reflects the power dynamics on the ground for drafting a constitution acceptable to all sides. In this process, the U.S. should actually support Turkey’s efforts and empower the opposition representatives at the negotiation table instead of calling for the replacement of the Astana process with that of the UN process. The Astana process has been effective in creating de-confliction zones and a forum for those with military presence on the ground to have sustained dialogue. It has not produced a political solution so far but it can contribute to it by engaging one of the most crucial actors on the ground, i.e. Iran.

The U.S. has already declared pushing Iran out of Syria as a major policy goal in Syria and Jeffery’s comments about the end of the Astana process appear to reflect that objective in mind. The Trump administration has been talking about confronting and rolling back Iran’s influence in the region, however it does not currently have a clear plan to achieve that. The only other alternative is for the U.S. to fundamentally shake up the dynamics on the ground and create a different game where other actors may be lured to a framework that excludes Iran. This, however, will be extremely difficult given Iran’s investments in Syria and willingness to commit its military and human resources on the ground. Absent a serious American investment to isolate Iran in Syria, Iran will continue to be part of the discussion as it can act as a spoiler militarily, politically, and diplomatically.

The good news is that the U.S. recognizes the crucial role of Turkey in all these goals, however the bad news is all these goals are unlikely to be achieved simultaneously.

The U.S. balancing act between supporting the PYD and providing reassurances to Turkey to be able to cooperate on the resolution of the Syrian conflict is not an easy one. Moreover, the U.S. hopes to push Iran out of the equation in Syria while achieving a political solution to the civil war, as well as, an “enduring” defeat of Daesh. Granted that the complexity of the terrain has a lot to do with this complicated picture, but the lack of clarity and the mismatch of the U.S. goals with its investments on the ground is the enduring story from the Obama to the Trump administration. The good news is that the U.S. recognizes the crucial role of Turkey in all these goals, however the bad news is all these goals are unlikely to be achieved simultaneously.