Can workers of Western media outlets tell their children how and why they appreciate a terrorist organization?

Deliberately chosen images, twisted headlines and the use of passive voice are provided in order to give the impression that the PKK is not responsible for the illegal activities that they carry out. 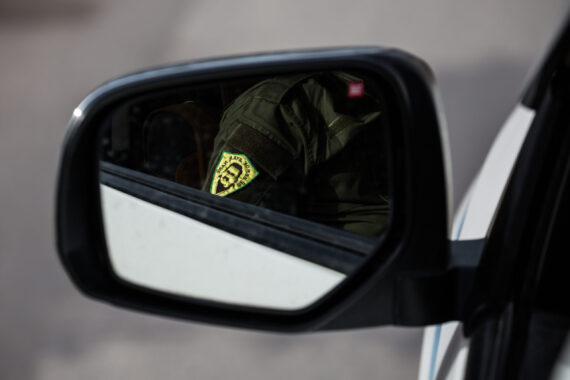 The portrait Ocalan can be seen in a car mirror, sewn on the uniform of a PKK militant in Dayrik/Syria. Getty Images

A report written by Sertac Timur Demir and published by the SETA Foundation indicates how terrorist organizations shape their communication strategies along with the technological developments.

The first section of the report examines the PKK within its own media organs. As a matter of fact, media aligned to the PKK, which has shifted from a traditional to a digital space, reveals the ideological codes and jargon the terrorist organization is based upon and wants to impose.

Following, the report assesses the way in which international media approaches the actions of the PKK, its discourse and its members.

Finally, Demir critically analyzes how parts of the center-left media affirms the PKK, while criticizing the Turkish state for its actions in its fight against terrorism. Demir highlights this topic by providing various examples of occasions where international, and even Turkish media, have failed to draw a distinction between reporting a terror attack conducted by the PKK and spreading the terrorist organization’s propaganda.

The report reveals the way in which the terrorist organization is legitimized, how its members are viewed as heroes and sacred, as well as how facts with regards to the group’s illegal activities are destroyed and how a rosy picture is drawn in order to depict the PKK as a harmless group.

Does the PKK use international media as a tool?

Report underlines the fact that certain influential international media outlets present the terrorist activities of the PKK in a soft tone. First of all, the group is labelled either as “rebel,” “Kurdish separatist group,” or “Kurdish militants.” According to the report, this labeling distorts the reality of the PKK’s existence as an officially listed terrorist organization in Europe and the U.S.

While Turkey’s war against terrorism has been continuing with the PKK for years, the PKK cannot be affiliated with a particular ethnic group. The reason for this is because not only does the PKK fail to obtain major support from Kurdish people living in Turkey, but also because over half of the Kurdish population in Turkey have been supportive of the government’s fight against the PKK.

Deliberately chosen images, twisted headlines and the use of passive voice are provided in order to give the impression that the PKK is not responsible for the illegal activities that they carry out. A couple of examples listed in the report are also listed below:

Thus, the reader gets the impression that the state is struggling with Kurds rather than terrorists. In one particular example, a PKK member was called a “legend.”In these, and many other headlines, there is no mention of what the PKK really is. In some cases the PKK is not mentioned at all – an indirect language tone is used.

In this photo used by the Economist on July 26, 2015, the PKK is reduced to Kurdish people who look helplessly in front of the armed Turkish soldiers.

Reasons why the international media reports from terrorist’s fronts

The PKK and its affiliated organizations – YPG/PYD/SDF – were considered as a major weapon in the fight against Daesh. As Daesh lost ground in the region, the PKK had the opportunity to represent itself to a large media coverage and naturally disseminate their own narratives, which concealed various illegal acts violating the rights of both Kurds and Turks. While there is a general tendency to portray the organization as “gender-equal” and “women empowering,” assuming that the female terrorists are some-what “glorified,” the report highlights the fact that this is a terrorist group – just like Daesh – that is left out. The claim that the PKK is a so-called “feminist” organization also oversees the fact that the group’s suicide bombers are in majority, women.

Turkey’s armed struggle with the PKK is also presented as the continuation of the ‘oppression’ of the opposition. Combined with the general stance towards Turkey and its President, Recep Tayyip Erdogan, one may wonder whether anything that Erdogan is against seems to attract the appreciation of Western media…?

In addition, over time, the updated and popular version of the phrase “Turkish state” or “Turkish army” has been transformed into a politically charged “AKP state.” One step further, it was observed that this narrative became more and more specific and that it was concentrated in President Erdogan in particular. Nevertheless, the international media’s bias towards one of Turkey’s major problems – namely terrorism – can be considered as a major concern for the future relationship between the West and Turkey.